Inside the rundown Washington, DC, home that got 76 cash offers

Here’s the skinny: Why TikTok hates this NYC building

Themed hotel rooms are having a moment on TikTok, thanks to this photography duo who have stayed at over 31 themed hotels in the past three years.

These getaways, which were most popular in the ’80s, will let you sleep in a sandwich bed in Chicago, a Venetian gondola in Utah or an arctic cave in Kentucky.

“We hope our tours reignite the fantasy, themed and adult hotel genre,” TikToker Margaret Bienert, 31, told The Post. “It’s such a fun escape to go to a room that pulls you out of your daily life into something you’ve never experienced.”

She and husband Corey Bienert, 32, began their unique couple’s hobby in 2018 when they found six themed suites at the Cove Haven Resorts in the Poconos, Pennsylvania, including one with a 7-foot champagne tower pool and one with a lit-up night sky creating a constellation over the bed.

“Every time we went to one, I kept saying, ‘People need to know about this. People would love this. Why don’t they know — why isn’t it advertised well? I would go!’” she said. “My husband kept saying, ‘Why aren’t you the person to tell them?’”

Two years into their themed hotel stays, the couple had to cancel their trips due to the COVID-19 pandemic. Instead, they agreed to a commission to create their themed rooms at the Rainbow Getaway in Palm Springs, California, which has furry pink, jungle green, glittery purple and polka-dotted yellow rooms, creating a rainbow.

While only a small percentage of the American population can get to California, themed rooms are everywhere. The Bienerts have visited an ancient Egypt-themed room at the Black Swan Inn in Idaho and a Renaissance-themed room at the Anniversary Inn in Utah, but the ones listed below are fan favorites.

TikTok’s favorite: Under the Sea rooms

In their most popular TikTok to date with 8.2 million likes, the Bienerts show an oyster bed in a secret underwater-themed room in a Best Western in Galena, Illinois.

“Next time you’re at a generic-looking Best Western, you might want to ask them if they have any secret theme rooms in the basement,” her video said.

They got another 2.6 million hearts for a video clapping back at viewers who didn’t believe the black-lit room where you can cozy up like a pearl next to real-live fish was really in a Best Western.

“Google it, bish! Then go book yourself a theme room,” she wrote.

Next to the bed is a Jacuzzi and fish tank (the views of which brought an additional 235,000 likes), and the wall has a wraparound mural of seaweed and underwater creatures. Their TikTok said they paid $199 a night.

Illinois isn’t the only place to offer oyster beds — the Black Swan Inn in Idaho lets you sleep in a giant shell and bathe in a tub filled by the spout of a fish. The video got 285,000 views.

Anyone else have some leftover Pirate fantasies from 2003? 👀 #hoteltour #themehotel #pirate #fantasy #fyp #travel #cosplay #kentucky

But theme rooms mostly for sex — or “seggs,” as TikTok users say to circumvent the algorithm from pushing down sex-themed content — aren’t just for intimacy.

This married couple coming up on their 10-year anniversary says the rooms speak more to their inner sense of wonder. They even dressed up as pirates and recorded themselves sword fighting at the Wildwood Inn in Kentucky.

But TikTokers certainly have responded most provocatively to the couple’s seggs-iest content, including 2 million likes on a hanging “love swing” at the adults-only Sybaris Pool Suites in Northbrook, Illinois. The suite also comes with a private pool with a water slide, which they filmed themselves skinny-dipping in for 133,800 likes.

Themed hotel rooms with “love chairs” are also a big hit, with videos of love chairs at the Executive Airport Hotel and the Grand Emperor Hotel in Miami (part of the Executive Fantasy Hotels) racking up a total of 2.6 million likes.

The Castle Wood Cottages in Big Bear, California, offer 11 themed cottages. The one featured in their video has a talking suit of armor, a waterfall, stained-glass windows, stone-like floors, Juliet balconies, arched walkways, ferns and greenery, according to the website. Combined across three posts, the cottage suite got just over a million likes on TikTok.

The Black Swan Inn in Pocatello, Idaho, also has a Juliet-themed room with almost 200,000 likes and hand-painted murals, castle turrets, a drawbridge and a heart-shaped tub, according to the website.

What does it *actually* look like? Right answers only 😩 #themehotel #princess #wtf #fyp #travelfail

Another fantasy room that grabbed attention was a Cinderella-themed suite at the Red Carpet Inn FantaSuites in Greenwood, Indiana, featuring a life-size plaster horse, the princess carriage and the fairy godmother mural.

But the video that blew up, raking in 1.5 million likes, featured a “glass-slipper” Jacuzzi that teaches travelers that themed hotels can be hit-or-miss.

America’s Best Value Inn & Suites Yucca Valley has a ’50s-themed room with a white Cadillac bed — the license plate reads “The King.” The walls are muraled with Hollywood views and lined with red neon lights.

You can also find a Cadillac bed at the Red Carpet Inn in Greenwood, Indiana, according to their videos. It has a pink Cadillac bed facing a mural of a drive-in movie theater, intended to make the guest feel like they’re at the movies. The back mural features “Happy Days”-like characters in front of a burger joint.

The couple recently visited the Dive Motel in Nashville. Unlike most of the other hotels and motels they visit, this is a new motel made from a refurbished 1956 motel called the “Key Motel,” which at one time hosted Johnny Cash, Dolly Parton and Hank Williams, according to the website.

The rooms have thick ’70s striped wallpaper, shag rugs, wood paneling, custom playlists and a disco ball in every room, controlled by a “party switch” like a light switch. Combined, the hotel got almost 500,000 likes across four posts on TikTok.

Outer space-themed rooms didn’t get as many likes as the other themed rooms — less than 500,000 combined — but they were among the couple’s favorite experiences.

The Sunset Inn & Suites in Clinton, Illinois, has a “Space Odyssey” room that has a UFO bed with a built-in sound system, alien-like LED lights and a glowing starry mural on the ceiling and walls.

“Some of our favorites are at the Sunset Inn in Illinois — this hotel in the middle of nowhere, surrounded by cornfields — and it has the most elaborate theme rooms, like their spaceship room. It’s so intricate,” she said.

The Red Carpet Inn in Greenwood, Indiana, has an “Alien Invasion” room with a spaceship bed, planet paintings on the walls and rock-like terraforming throughout the room.

The “Crystal Cave Room” in the Best Western in Galena, Illinois, and suites at the Cove Haven Resorts in the Poconos, Pennsylvania, also have lit stars on the ceiling, giving the feeling of sleeping under the stars. 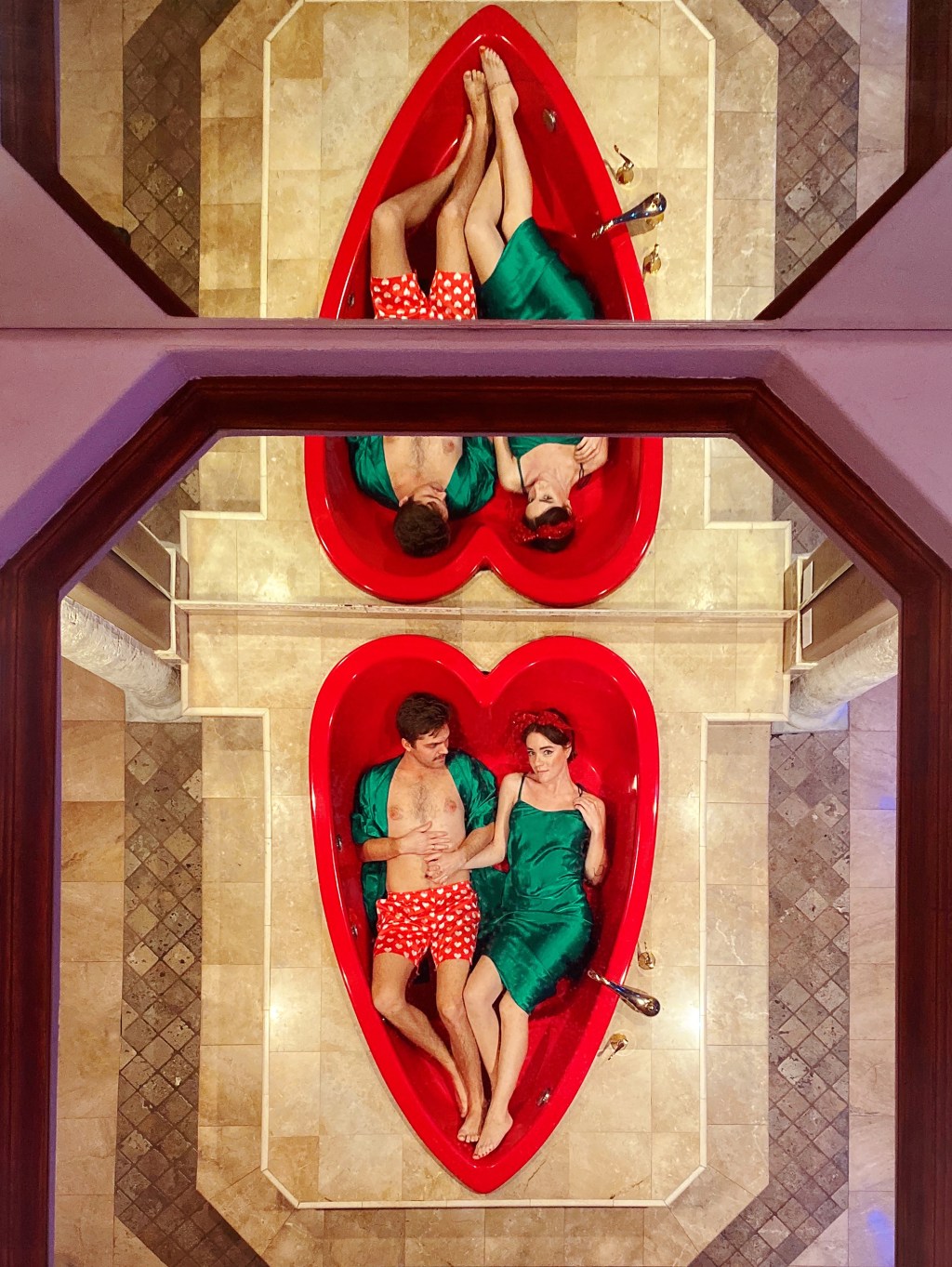 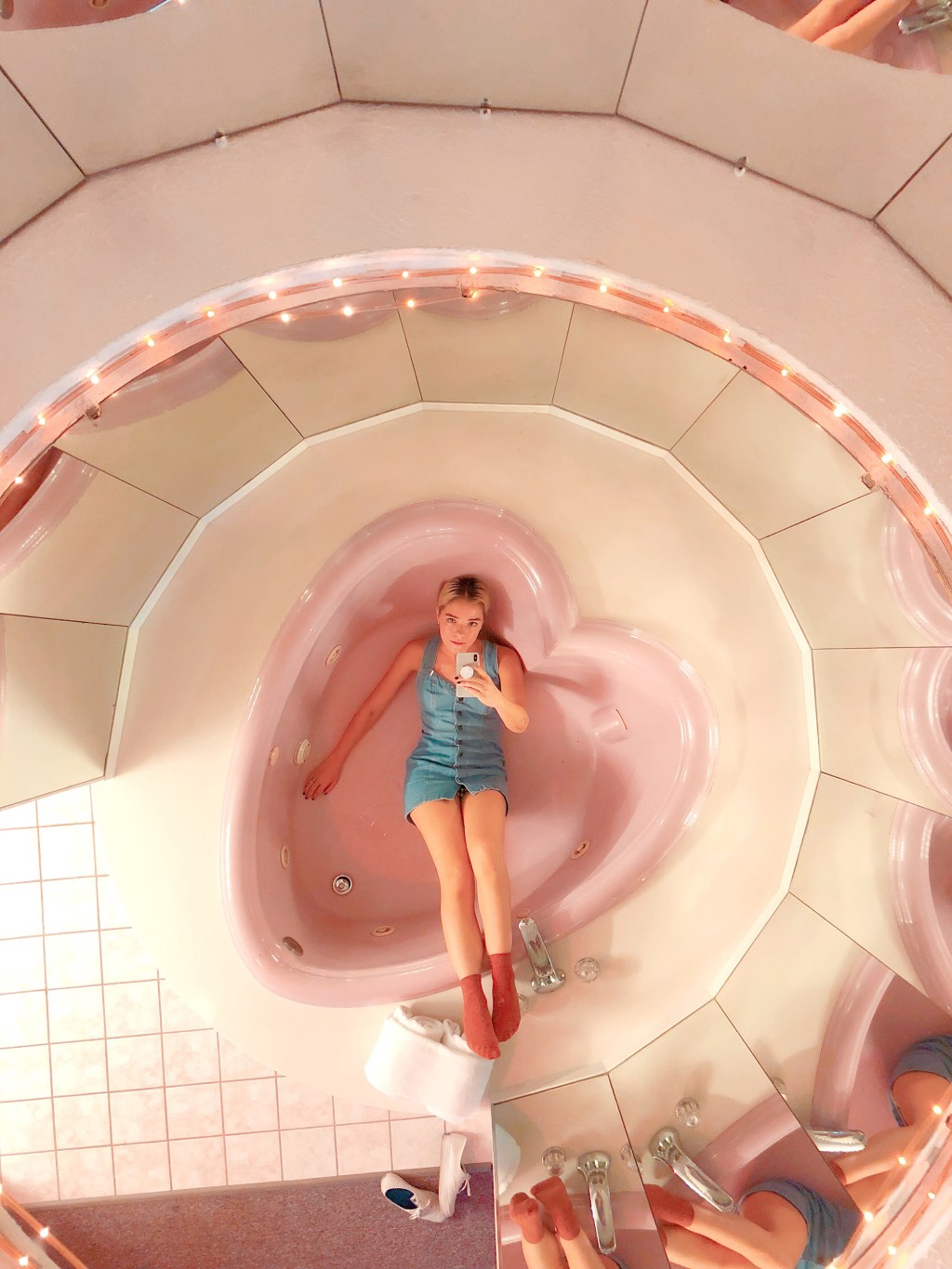 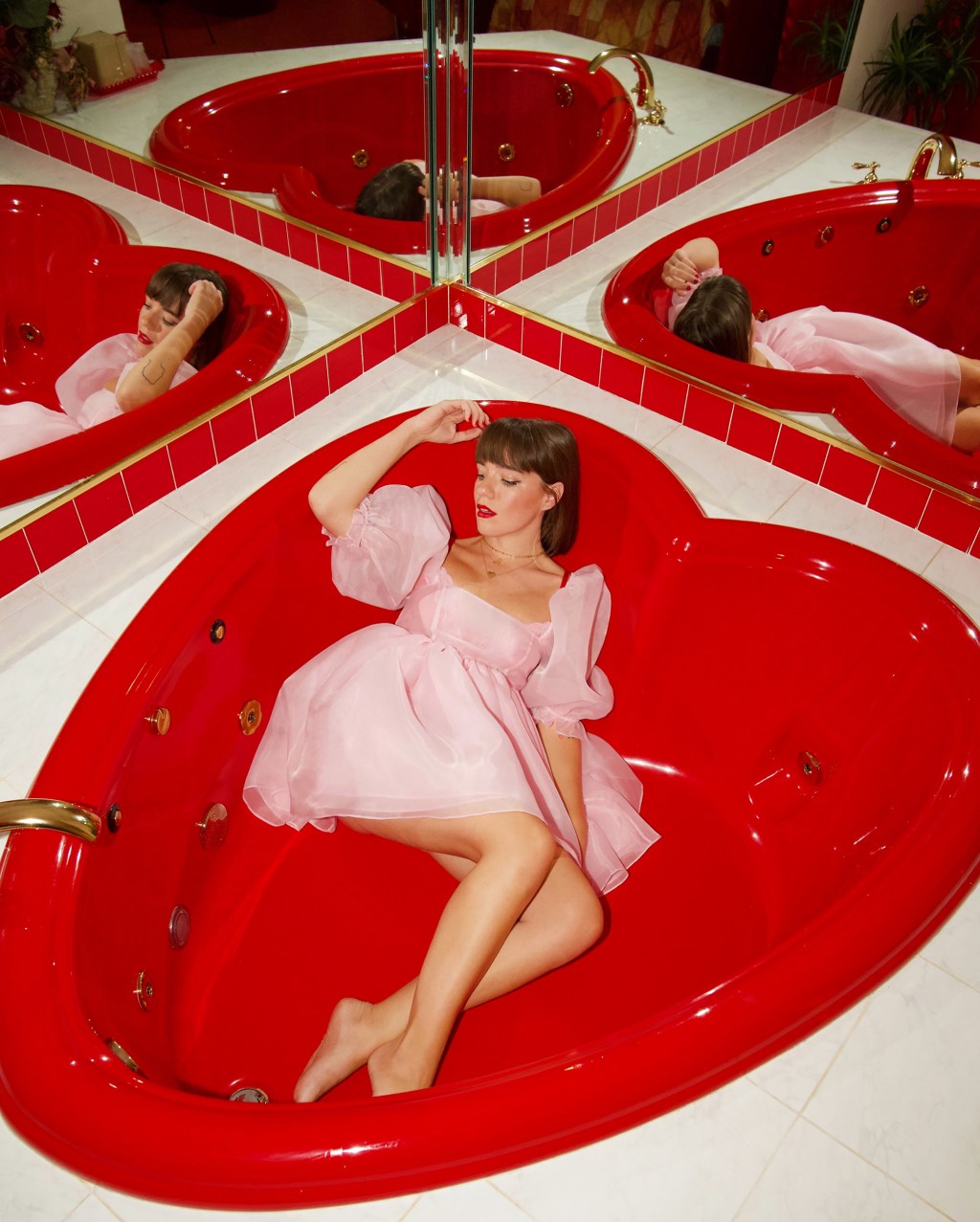 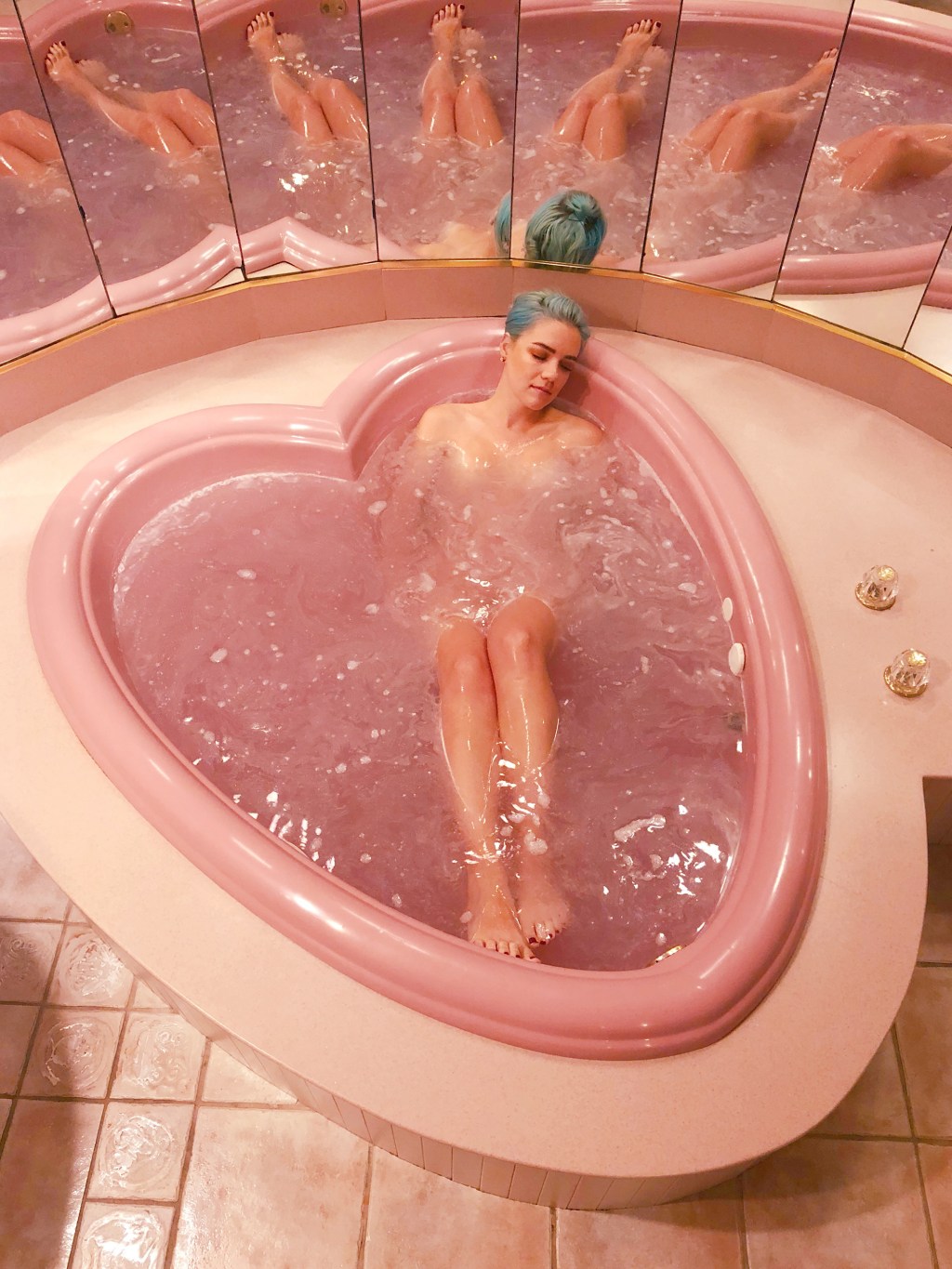