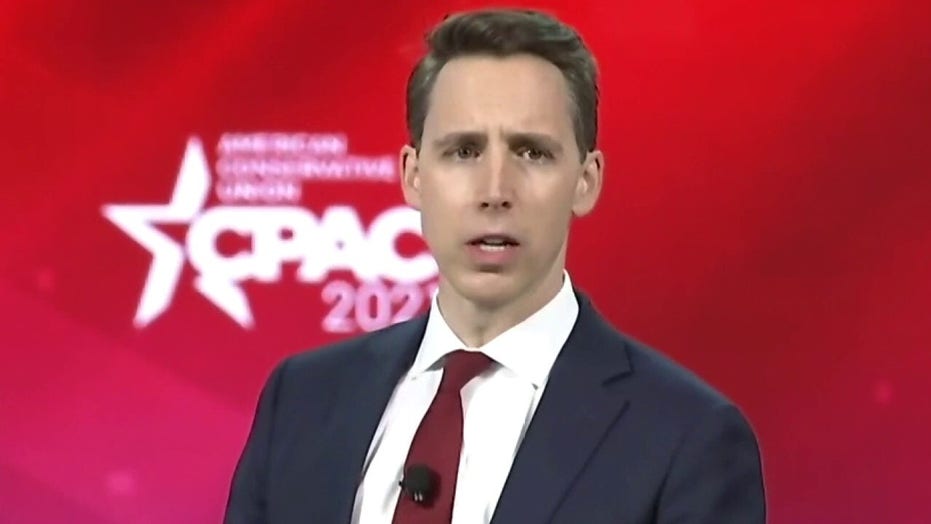 Sen. Josh Hawley, R-Mo., says Americans need to stand up and take a stand against Big Tech and cancel culture

EXCLUSIVE: Sen. Josh Hawley is warning that Big Tech companies are working to “transform America,” arguing in his new book that mega-corporations are the “gravest threat” to liberty in decades.

Hawley, R-Mo., in an exclusive interview with Fox News, described his book – “The Tyranny of Big Tech” – as one that “corporate press, corporate media, and corporate monopolies” wanted “canceled.”

The book, which is expected to hit the shelves May 4, was initially set to be published by Simon & Schuster. But after the Capitol riot on Jan. 6, the company dropped Hawley as a client after he and other Republicans objected to certifying Electoral College votes in certain battleground states in the 2020 presidential election.

“The irony is, the book is about the control Big Tech has over our politics, and over our society, and it was Big Tech that led the effort to get this canceled,” Hawley told Fox News.

“I think it was a petition drive that started on Twitter – certainly was amplified by Twitter, that caused the corporate publisher to say we ought to back away from this,” Hawley explained, noting that he is “grateful there are still independent publishers,” referring to Regnery Publishing, which he ultimately signed with.

“This is a book that corporate leftists don’t want anybody to read, and for good reason,” Hawley told Fox News. “This is all about how big tech and mega corporations are working hand-in-hand with big government to try to run our country, silence our speech, and take over our government.”

“And we have to stop them,” Hawley said.

Hawley, who has been vocal against Big Tech and social media giants since taking office, warned that they are “so ubiquitous, so powerful, they are more powerful by the day.”

Hawley claimed that Big Tech “interfered big time” in the 2020 presidential election, referring to Twitter and Facebook limiting the circulation of reports about Hunter Biden’s foreign business dealings and suspending the accounts of journalists and the New York Post when they tried to share those reports.

“These are folks that want to try to impose their agenda – and it is a leftist, woke agenda – on the country,” Hawley said, warning that Big Tech “wants to tell people what you can post, wants to control the news, control what people read and what journalism looks like.”

Hawley said one remedy is to “break companies up,” and he told Fox News that it should be Republicans leading that charge.

“Facebook currently owns Facebook, but also Instagram, and they also want to have their own currency, or something like it,” Hawley said. “Google owns not just Google search, but Gmail, and all of these other products, and cloud computing services, and they own YouTube.

“One company should not be allowed to have all of these different platforms,” Hawley continued, pointing to Amazon and their ownership of Amazon Web Services, which he described as a “huge cloud computing system.”

“They shouldn’t be able to do all of that simultaneously and control so much of the internet,” Hawley said.

Earlier this month, the senator introduced the “Bust Up Big Tech Act,” which focused on banning companies that own marketplaces or search engines from owning online hosting services.

For example, the legislation would ban Amazon from being able to sell Amazon-branded products on Amazon Marketplace, where its competitors also do business. The bill would also ban Amazon from simultaneously owning a large amount of the cloud computing services that many online companies use and continuing to run its ubiquitous retail business.

The bill would also give the Federal Trade Commission authority to monitor compliance with the law and allow state attorneys general and individual citizens to sue tech companies they believe are in violation of the law.

Meanwhile, as for social media, Hawley told Fox News that he believes those platforms “could be a great benefit.”

“I think if social media were truly social media, if it were really about communicating with each other, forming friend groups—think about Facebook before it introduced the newsfeed and algorithms that try to determine what we see and what we do, try to push advertising at us based on our behavior—before that, I think there could be a great benefit to having social media,” Hawley explained.

But the senator slammed Facebook and Twitter, saying they “take our data and personal information without our consent or knowledge, and then they try to use that in order to control what we see, sell stuff to us, and are constantly using artificial intelligence to push stories at us to get us to click on this, to buy that, to read that.”

“I think that constant manipulation, which has become synonymous now with social media, I think that’s dangerous,” Hawley told Fox News. “I think that’s bad, and I think the government shouldn’t be subsidizing it.”

He added, though, that if users “can get to a place where we’re not being constantly manipulated by the companies, I think there can be great value in that.

“I would say it is time we take back control over our own social communications from these companies, and practically speaking, people spend less time on the platforms, and do as much of our lives as we can with actual relationships, old fashioned meeting face-to-face, calling, texting,” Hawley said. “But moving off the platforms so that they don’t control every aspect of our lives.”