Furniture and electronics giant Harvey Norman has repaid $6 million in JobKeeper subsidies to the federal government following record profits for the 2021 financial year.

The ASX-listed company, founded and chaired by billionaire Gerry Harvey, told investors on Tuesday morning it had paid back $6.02 million in JobKeeper subsidies to the tax office, reflecting all the wage subsidies received by company-controlled entities over the 2020 and 2021 financial years. 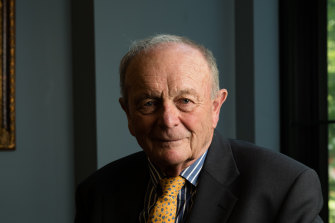 Harvey Norman founder and chairman Gerry Harvey. The company has been under extensive pressure to repay its JobKeeper takings.Credit:Janie Barrett

The move follows a year of record sales and earnings for the business, which reported a 15.3 per cent increase in total revenue to $9.72 billion and a massive 78.8 per cent spike in adjusted profit before tax to $1.18 billion.

Thanks to this, the company declared a 15 cent final dividend, upping its full-year dividend by 45 per cent to 35 cents per share, marking a total payout of $436 million. Around $140 million of this will be paid to Mr Harvey, the company’s majority shareholder.

“The solid results delivered in the 2021 financial year is a testament to the strength and resilience of the integrated retail, franchise, property and digital strategy, and its ability to adapt and transition to the challenging retail landscape and continue to navigate the uncertainties presented by COVID-19,” Mr Harvey said in a statement.

Harvey Norman has been a major beneficiary of the pandemic due to its range of office products, household goods and consumer electronics, all of which have been popular purchases for shoppers during lockdowns.

Due to this, the company has been under extensive pressure to repay its JobKeeper takings, however, until now Mr Harvey had refused to do so, telling The Age and The Sydney Morning Herald in February at that stage he “was not going to repay it”.

The company did not detail its reasoning why it chose to repay the subsidies. An estimated further $14 million in JobKeeper was claimed by Harvey Norman franchisees.

Sales through the start of the new financial year have fallen due to lockdowns, with trade down 19.2 per cent in Australia through July and August, however sales are up 11 per cent when compared to 2019.