More than 130 Republicans, led by Rep. Matt Rosendale of Montana, signed a letter to Veterans Affairs (VA) Secretary Denis McDonough asking him to provide assurances that the VA won’t attempt to change its rules to provide abortion or abortion-related services under the new administration.

The letter comes after McDonough said in a March hearing that he did not plan to change the current ban on the VA providing abortion or abortion counseling, though he maintained the right to do so. Rosendale said in an interview with Fox News that the purpose of the letter is to ensure “there is no misunderstanding or misinterpretation” on the issue.

“During a recent hearing before the House Committee on Veterans’ Affairs, you stated that you do not plan to pursue public rulemaking to amend that regulation and add abortion or abortion counseling to VA’s medical benefits package. We applaud that assurance,” the letter says.

“It is undoubtedly the right decision for veterans and their unborn children. However, we wanted to make you aware that, in addition to that regulatory prohibition, VA is also prohibited from providing abortion in law,” the letter continues.

The letter cites a 1992 law which says VA hospitals may provide women with pap smears, mammograms and “[g]eneral reproductive health care,” but not “infertility services, abortion, or pregnancy care (including pre-natal and delivery care).”

Rosendale said he wants to get McDonough to say “in writing” the VA won’t provide abortions because the new administration’s “agenda is dramatically different than the pro-life president that we had under the last administration.”

“The Biden administration has given full embrace to the pro-abortion agenda,” Rosendale added. 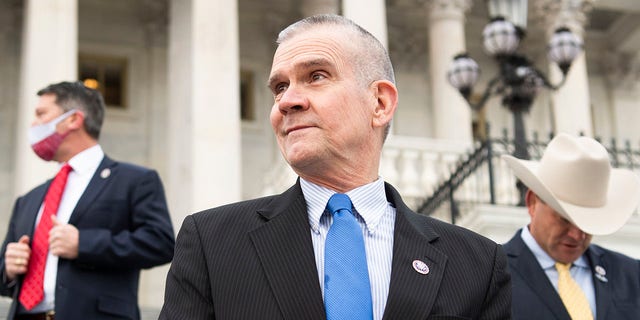 Rep. Matt Rosendale, R-Mont., is seen during a group photo with freshmen members of the House Republican Conference on the House steps of the Capitol on Monday, January 4, 2021. (Photo By Tom Williams/CQ-Roll Call, Inc via Getty Images)

“The Republican conference embraces, supports and defends life,” Rosendale said of the broad support for his letter among Republicans. “The Democratic Party is the party of death.”

“It would be a disservice to our veterans — who fought to protect innocent Americans — to have the VA use taxpayer money to kill unborn babies by providing abortions or abortion counseling,” House Republican Whip Steve Scalise of Louisiana said in a statement. “This goes against our veterans’ defense of the right to life and protecting the voiceless.”

Rosendale also highlighted his opposition to the Equal Access to Contraception for Veterans Act, which just was added to the House calendar after being reported out of committee.

But Rep. Julia Brownley, D-Calif., the chief sponsor of the bill, said it is critical because “women using civilian health insurance may access basic health insurance services like the pill or an IUD without any copay… However, women veterans who receive health care through the VA do not have access to the same benefit. Clearly, we need to fix this inequity.”

“The benefits of contraception are widely recognized,” Brownley added. “Women compromise the fastest-growing sub-population within the military and the veteran populations. Yet many of their health needs go unaddressed in a VA system that has not evolved to serve a rapidly changing population.”

Rosendale said taxpayers in Montana are not interested in paying for drugs like Plan B, as Brownley’s bill would mandate. And he emphasized to McDonough in the letter that the VA “must never” spend taxpayer money on abortion-related services.

“It is our belief – and the law maintains – that VA must never use taxpayer dollars to provide abortions or abortion counseling to veterans,” the GOP letter states, “To do so would be contrary to the God-given right to life, liberty, and the pursuit of happiness that generations of veterans fought to defend. We trust that you agree and that you will continue to protect and preserve the sanctity of life in VA.”