Father Joe Petito and stepfather Jim Schmidt discuss the search for Gabby in Jackson, Wyoming, her fiancé, and the statement he put out through his lawyer

The father of 22-year-old Gabby Petito responded on “America’s Newsroom” Wednesday to a statement issued through a family lawyer by his missing daughter’s fiancé, Brian Laundrie.

“You know, we’re shooting from the hip here and trying to do what we can. So I don’t care about the statement. I care about finding Gabby.”

Laundrie was later named a person of interest in the disappearance on Wednesday.

On Tuesday, Laundrie’s attorney Steven Bertolino said the fiancé’s family hoped that Petito would be found and reunited with her parents.

Petito was last seen in late August at Grand Teton National Park in Wyoming, according to police, and she was reported missing over the weekend after her parents hadn’t heard from her in a week.

She was reported missing on September 11 after she ceased regular communication with her friends and family. Her mother spoke to her on the phone August 25, and received texts from her a couple of days later but was unable to confirm if the texts really came from Gabby.

Petito also emphasized the need to circulate his daughter’s photos in hopes of locating her. 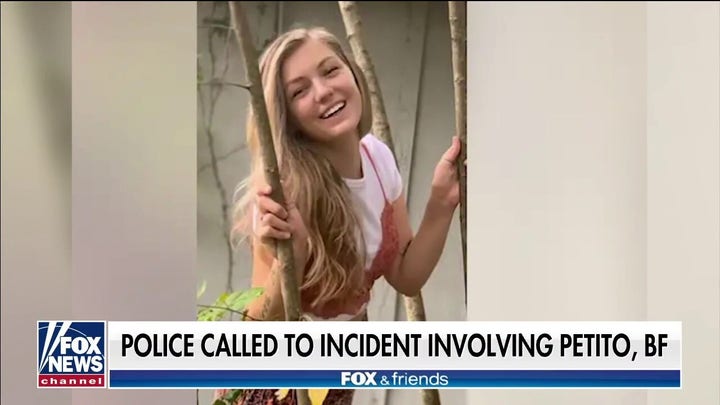 Fox News reported Tuesday that about a month before Petito was reported missing, Utah police responded to an incident involving her and her fiancé, although neither of them were the reporting party and no criminal charges were ultimately filed.

The incident took place about two weeks before Petito was last seen.

Officials still have not determined if a crime took place, but are trying to get into contact with Laundrie to discuss the disappearance.

Laundrie’s family hired a lawyer after he returned to Florida in the van that the couple used, but without Gabby.

Police seized the van Monday as part of their investigation, which involves law enforcement agencies in multiple states and the FBI, the latter of which began a forensic examination on the vehicle Tuesday, North Port police told Fox News.

Gabby’s stepfather, Jim Schmidt arrived in Jackson, Wyoming Tuesday to help law enforcement with anything they might need in the search. He said Gabby has not been heard from since being in the area before a planned trip to Grand Teton and Yellowstone National Parks.

Gabby is originally from New York but lives in Florida, so she has family and friends in both places according to Schmidt.

“We feel we have those two areas covered, but we didn’t have anyone out here,” said Schmidt. “We all just agreed we felt like we need someone out here to try to assist in any way we can to locate her.”

Despite conflicting reports, Petito confirmed his daughter was engaged to Laundrie but getting married wasn’t their main focus. The pair were allegedly focused on enjoying their youth, according to Petito.

“There still weren’t any red flags that would have indicated we would be here today,” said Petito.

Anyone with any information regarding the disappearance is urged to call Crime Stoppers at 1-800-220-TIPS.