These are some of the steps big employers are taking to keep their businesses operating and minimise risks for staff, as the novel coronavirus COVID-19 sweeps the globe. 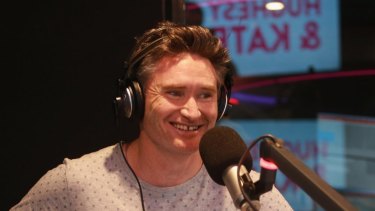 Southern Cross Austero is working on plans to let its presenters broadcast from home. Credit:Wayne Taylor

Many companies had already banned travel to high-risk countries and placing hand sanitiser in offices in recent weeks, but pandemic planning has now moved up a gear.

Some companies are cracking down on domestic travel, while others are limiting the size of internal meetings. Thousands of staff from NBN and Tabcorp worked remotely on Thursday as part of a test run.

Broadcaster Southern Cross Austereo, which runs stations Triple M and Hit, used specialised technology to ensure staff across its 65 offices, including radio talent, can work from home should they be required.

Chief executive Grant Blackley and chief technology officer Stephen Haddad are working together to ensure all staff at the company, which runs Hit and Triple M radio networks are aware they can do their jobs – be it advertising slots or running radio shows – from outside of the office.

“We are planning for an event that could potentially lock the doors on every single building we have around the country, and for us to operate continuously from a remote location, with 2500 people within our company. We are planning for that as a necessary next step that could occur,” Mr Blackley said.

All radio shows have contingency locations, which include the homes of talent, hotels and sports stadiums. In Melbourne for instance, broadcasts can be done at Channel 10, at Marvel Stadium or at homes of radio talent including Carrie Bickmore, Dave Hughes and Fifi Box.

Other large employers are busily testing arrangements that would allow them to keep functioning with staff in different locations, including in their homes.

Wagering giant Tabcorp had at least 1000 of its staff “working remotely” on Thursday, to ensure its systems were ready and able to cope in case this was required on a large scale, and NBN ran a similar exercise.

Some companies have also reviewed employment conditions. Telstra this week said it had introduced a "global epidemic and pandemic leave policy" that would give staff up to 14 days leave for self-isolation, or looking after a child because their school was closed.

"This is an unprecedented situation – one that requires us to step up, be there for our people and give those who need it most the support and reassurance to get through this difficult time," a company spokesman said.

Businesses are also seeking to limit the chances of staff transmitting the virus while in the office, with health insurance giant Medibank Private putting a stop to hot-desking at its Sydney office, and asking staff not to hold meetings of more than 20 people in a room.

Businesses that deal with large numbers of customers face-to-face are taking their own precautions.

If the option is selected, delivery drivers will place the pizza on a safe surface at the delivery location, before backing away two metres from the pizza.

Employers have also been sending home staff who may have been at risk of contracting the virus.

Law firm King & Wood Mallesons asked Sydney staff to work from home on Thursday after one staff member suspected they contracted the virus overseas. This newspaper's publisher, Nine, said some staff would be self-isolating after coming into contact with actor Rita Wilson, who was diagnosed with COVID-19.