The coronavirus has hit Australia's private health sector but the financial impact on the ASX-listed insurers is not what many would expect.

Health Minister Greg Hunt has effectively nationalised the country's private hospital sector for the duration of the contagion crisis after promising to "guarantee the viability of private hospitals" which have lost most of their business after the government banned non-essential elective surgery.

And the 13.6 million Australians who have private health insurance did not take a hit from the mandated increase in premiums of just under 3 per cent due to take effect on April 1.

Australia's ASX-listed health insurance giants Medibank and NIB have delayed the increase by six months, so has the privately-owned BUPA and not for profit players such as HCF. 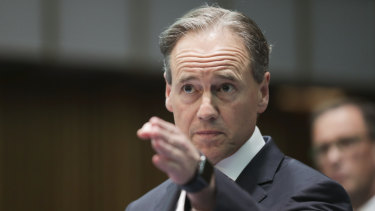 Minister for Health Greg Hunt during a press conference to provide a update on the coronavirus. Credit:Alex Ellinghausen

Private health insurers have also offered financial relief for customers who have lost their jobs, are underemployed or have contracted the virus. This includes the insurers offering full hospital coverage for all policy holders affected by COVID-19 irrespective of the level of cover.

It represents an abrupt turnaround from the industry's position that it faces the jaws of death from diminishing viability as younger healthier members drop their cover and older members use more – and more expensive – services.

As recently as February, the prudential regulator warned the federal government the affordability crisis was "unsustainable" and only three private health insurers would be viable by 2022 if current trends continue. "A new approach is urgently needed and it must be a whole-of-industry response," Australian Prudential Regulation Authority executive board member Geoff Summerhayes said.

That all changed – temporarily at least – when the government effectively shut down most elective surgery last month to free up capacity to fight the coronavirus. 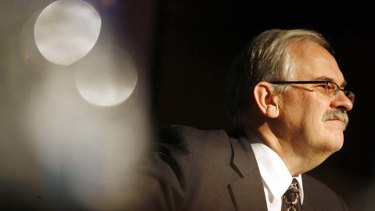 The single biggest expenditure item in the private health insurers financial accounts disappeared overnight and created a rather embarrassing boon for the sector.

Shaun Gath, who headed the Private Health Insurance Administration Council until 2015 when its prudential regulatory role was handed to APRA, says private health insurance is experiencing the "perverse" effect of actually receiving a windfall from the changes.

"All that work which would have been billed to the private health insurers is no longer going to come through, so they are going to end up with a big windfall because they have obviously set their premiums on the basis that there is going to be this usual level of demand on them and it's not going to exist," he says.

“Private health insurers in the short term are doing very well indeed because their revenue is continuing and their costs have fallen through the floor because there is basically no elective procedures being done," Duckett says.

The insurers themselves are not denying this.

“I think there will be an acceleration of the youth exodus … in the longer term this is not good."

When market leaders Medibank and NIB announced their premium delays and support package both insurers acknowledged the point. "We hope these initiatives go some way to relieve the stress and anxiety our customers are experiencing," said Medibank chief executive Craig Drummond last month when he announced a $50 million support package.

"And we are committed to ensuring that our customers benefit from unforeseen financial gains in light of the Australian government's cancellation of non-urgent elective surgery in private hospitals to free up critical health resources."

And while their respective share prices have barely been dented by the shockwave that has hit the sharemarket over the last month, analysts agree this is not the time to be anything other than good corporate citizens.

"Although we recognise private health insurers could oppose many of these customer assistance options, we believe it would be prudent to exercise a strong social conscience in such a heavily regulated industry in drastic need of its own regulatory reform," said Macquarie Equities analysts of the customer hardship options being offered.

To give an idea of the potential windfall for the insurers though, Macquarie estimates that a fall in claims of just 20 per cent could create a net profit of $1.18 billion for Medibank as opposed to Macquarie's previous base case estimate of $385 million based on claims growing 4.1 per cent.

Of course, it is not as simple as that, especially in the longer term.

Gath says the situation is so fluid it is hard to know how this will play out in terms of concerns people will drop their insurance, or how a sudden backlog of elective surgeries will impact on the insurer's financial health. “I think they are both legitimate concerns,” he says.

Duckett says the economic question is the big issue. "As people lose employment they’re going to have to re-evaluate pretty carefully any expenditure and private health insurers are at risk of people dropping out of insurance because they don’t have the same amount of income,” he says.

“I think there will be an acceleration of the youth exodus, there might even be a dropping out of people in older age groups as well because they have lost their employment. In the longer term this is not good."

A bigger problem could be the government which will soon need to desperately gouge back what cash it can to fill the ballooning deficit spend which is increasing by the week. A potential target, according to Duckett, is the middle-class welfare payments such as the healthcare rebate.

“I think it would be one of the last ones they will attack, there are others that there will be way more money in but it's still an issue that is sitting there," he says.

But the effective nationalisation of private hospitals like those owned by Healthscope and Ramsay Health Care might also face some interesting repercussions from their shock merger with the public health system.

“How that plays out in terms of the private health sector as able to sell itself as something worth paying extra for is going to be an interesting question,” says Gath.

Duckett agrees, saying the issue could be significant if the government decides the public system is coping with the coronavirus and contracts out all remaining elective surgery to the private hospitals leading many to question why they are then paying for private health.

"There is a set of dynamics there that we really don’t know how they will play out for another six months or so and when we start to see the patterns of private health insurance membership,” he says.