After the iron ore price hit an all-time high of $US193.85 this week, Fortescue chief executive Elizabeth Gaines on Thursday revealed the company was on course to ship a record-breaking yearly amount of the key steel-making raw material from Western Australia. 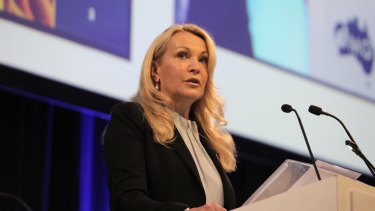 “We are in very strong shape,” Ms Gaines said.

“The only obstacles are Mother Nature – we’ve had some very heavy rains this month, which is unusual and had a big impact on operations … and the only other one is COVID. We’ve managed that really well, but we can’t be complacent about it.”

Fortescue, whose biggest shareholder is Andrew “Twiggy” Forrest, shipped 42.3 million tonnes of ore during the March quarter, bringing its year-to-date shipments to a record 132.9 million tonnes.

“The strength of the Chinese economy should never be underestimated,” Ms Gaines said. “The policy settings in China continue to support strong steel production and steel demand.”

However, the mining giant also warned it was incurring higher-than-expected production costs and has raised its capital spending guidance due to the impact of a strong Australian dollar, investments in clean-energy projects and cost blow-outs at its troubled Iron Bridge magnetite project.

Fortescue’s full-year spending would now be between $US3.5 billion and $US3.7 billion, Fortescue said, up from the range of $US3 billion to $US3.4 billion it had previously set in February.

As prices continued to climb in recent months, Fortescue achieved an average of $US143 per dry metric tonne during the quarter – an increase of 17 per cent from the previous quarter, but lower than some analysts had been expecting.

Kaan Peker, a Sydney-based analyst with the Royal Bank of Canada, described Fortescue’s increased production costs of $US14.90 a tonne, due to seasonally lower volumes and the strong Australian dollar, as a “big step up”.

“This was well above our estimated $US13.5 per dry metric tonne and consensus of $US14.2,” she said.

Iron ore is by far Australia’s most lucrative export, last year becoming the first of any Australian product to top $100 billion in yearly export earnings.

This week’s record price, which toppled the previous record of $US193 a tonne set in 2011, came as demand from Chinese steel mills rose in the lead-up to a Labour Day public holiday. Analysts at investment bank Macquarie suggested the price may continue to soar even higher and soon cross $US200 a tonne.

“Iron ore prices continue to rally,” they said. “With steel margins remaining positive, there is scope for spot prices to hit $US200.”

A concise wrap of the day on the markets, breaking business news and expert opinion delivered to your inbox each afternoon. Sign up  Here.