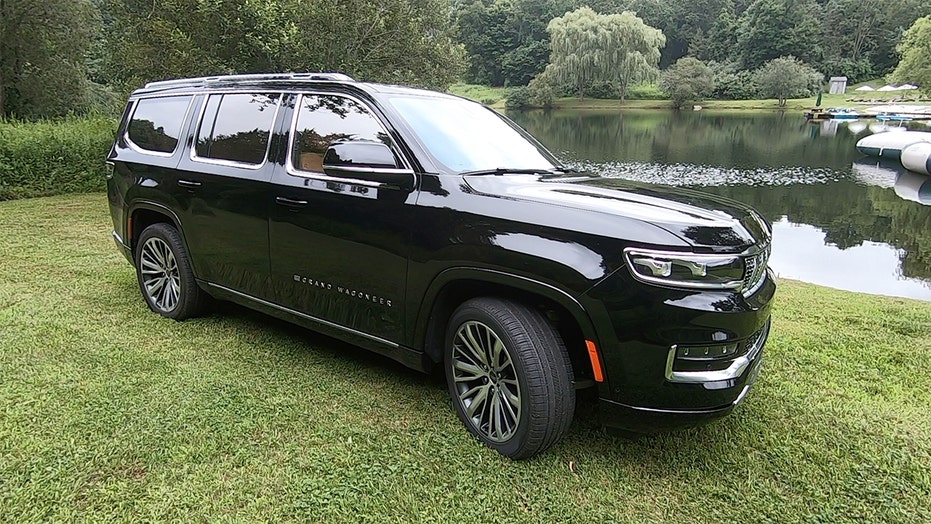 Jeep’s newest model is split into two, and it would prefer you didn’t call them Jeeps.

The Wagoneer and Grand Wagoneer are twin trucks designed for the upper middle and wealthy classes, respectively, and hearken back to the classic SUVs that enjoyed an epic run from 1963 to 1991 without going retro. 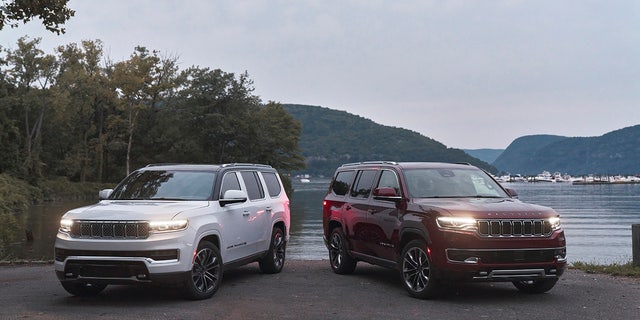 The 2022 Grand Wagoneer has its name on the grille, while the Wagoneer’s is above it.
(Jeep)

Jeep has stripped its name off of both vehicles – save for the tiniest mentions hidden in the headlights and side view mirror supports – to better position them as a sort of premium sub-brand, the same way Range Rover is related to Land Rover. Dealers who want to sell them even have to meet a hoity-toitier level of customer service criteria to be certified to do so. 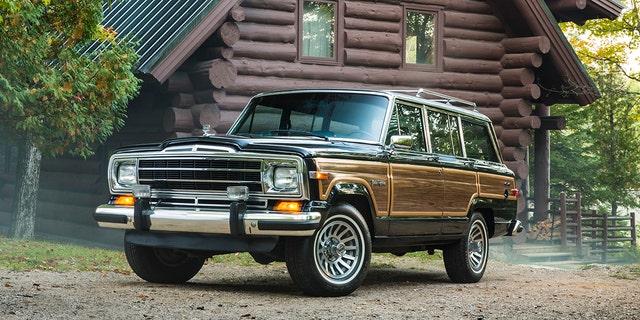 The new trucks don’t borrow much from the original beyond their forward-leaning grilles.
(Jeep)

The Wagoneer starts at $59,995 and the Grand Wagoneer at $88,995, pitting the former against top versions of the Ford Expedition, Chevrolet Tahoe, GMC Acadia, Nissan Armada and Toyota Sequoia and the latter against the Infiniti QX80, Lexus LX570, Lincoln Navigator and the sales-leading Cadillac Escalade. 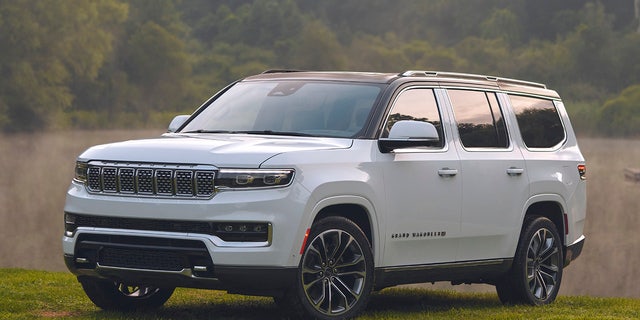 Like all of those competitors, the “Jeeps” are body-on-frame trucks and use a platform derived from, but not the same as, the Ram 1500’s. Notably, they feature independent rear suspensions for improved ride quality, but have been thoroughly modified for SUV duty. 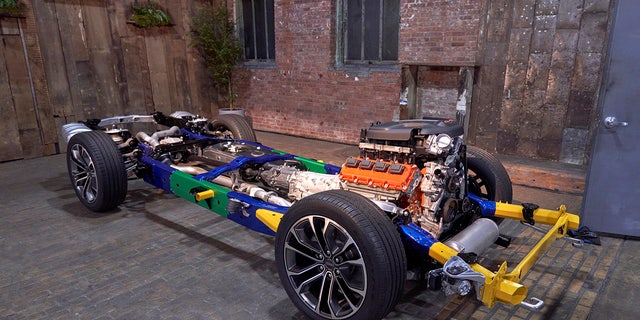 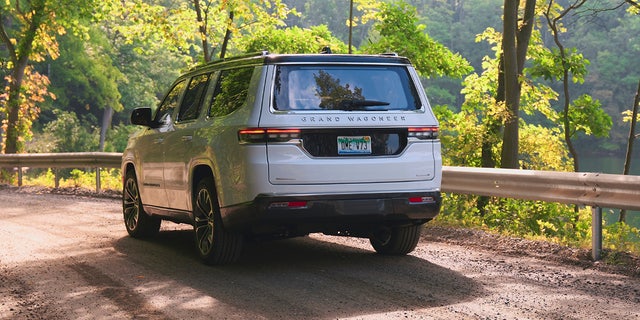 The main way to tell them apart on the outside are the shapes of the grilles and hoods and the design of the tailgate trim. And, yes, the grilles have seven-slots, which gives up the goods on them being Jeeps. Fans of the classic Grand Wagoneer will be sad to learn there isn’t even a speck of sawdust to be found, let alone wood paneling, at least not on the outside. 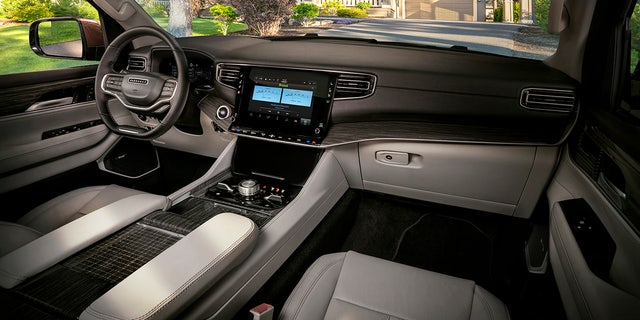 The Wagoneer’s interior is slightly less lavish than the Grand Wagoneer’s.
(Jeep)

The Wagoneer sports a price-appropriate, but somewhat synthetic interior treatment, but the Grand Wagoneer is draped in leather and hectares of wood. Unlike the Fords and GMs, they each only come in one size for now, but are roomier than the short-wheelbase versions of their rivals, with plenty of space for six-footers in all three rows and the largest cargo area behind the third. 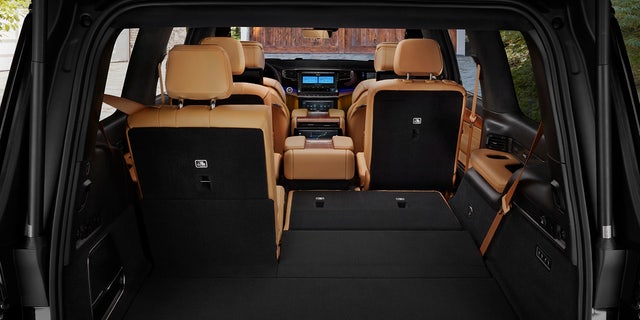 The list of technology and creature features available across the lineup is comprehensive and includes adaptive cruise control, a 360-degree birds-eye-view camera, head-up display, night-vision, a refrigerated armrest, an electronic locking steel safe armrest and massaging front seats. A highway driving aid similar to GM’s Super Cruise will be added soon that uses facial recognition technology to allow for hands-free, but supervised, operation. 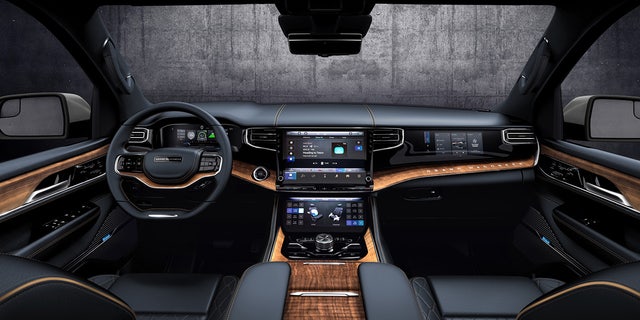 The Grand Wagoneer’s interior is trimmed with hectares of wood.
(Jeep)

The Grand Wagoneer’s standout feature is an available array of seven digital displays that incorporates a gauge cluster, center stack touchscreen, front and rear climate/feature controllers, twin Amazon Fire TV-equipped rear displays and a display for the front seat passenger that can play video when the vehicle is in motion, but has a filter that prevents it from being viewed from the driver’s seat.

The entertainment screens can also mirror video from handheld devices and be used for a Relax mode when the vehicle is parked, which pulls the very Tesla move of using them to display a fireplace, northern lights and other calming imagery with an associated soundtrack. Just be careful with the volume on the top of the line 23-speaker, 1,375-watt McIntosh sound system option or the whole “relax” idea will be for naught. 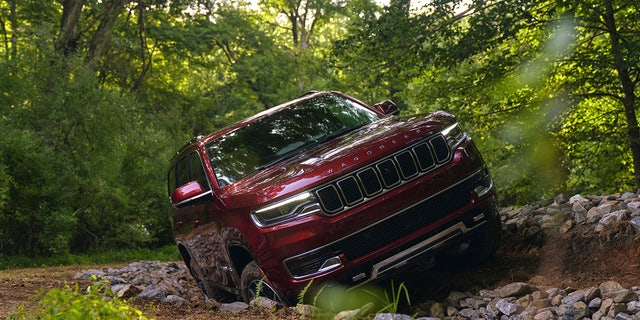 The V8s are just as powerful as the audio system and have no trouble moving these three-ton behemoths around. Maximum tow ratings are 10,000 pounds for the Wagoneer and 9,850 pounds for the heavier Grand Wagoneer, both solidly ahead of all comers in the class. Combined fuel economy ratings from 17 mpg to 18 mpg are middling but Jeep promises a plug-in hybrid model will be added to the lineup in the future if that’s a deal breaker. (Based on the strong sales of full-size SUVs these days, it is not.)

More impressive than the way the Wagoneer and Grand Wagoneer haul is how they handle curvy roads with the agility of those ballet-dancing elephants from the Disney classic “Fantasia.” The independent suspension really pays off here and the adaptive shock absorbers that go with the air suspension step things up a notch.

The air springs can literally do that when you go off road, increasing the ride height from eight to 10 inches, or lowering it to 7.4 inches for easier entry. Neither model gets Jeep’s signature Trail Rating, but they can handle a good bit of rough stuff and a scary amount of yaw without rolling over. 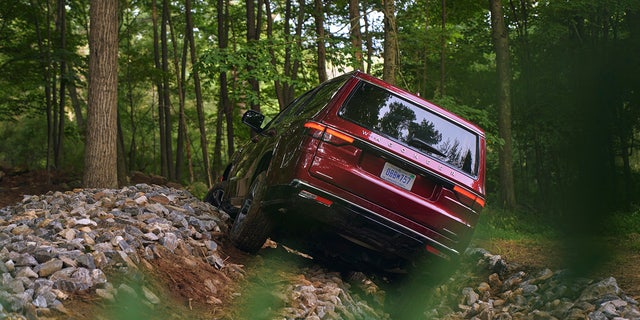 The Wagoneer can be ordered with either the full-time Quadra-Trac I all-wheel-drive system or the Quadra-Trac II that adds a part-time low-range transfer case, while the Grand Wagoneer features a Quadra-Trac II with limited-slip differential that’s capable of sending all of the power to one wheel when traction is scarce.

Jeep set up a few rock gardens to play with them on at a test drive event that were far more challenging than the sort of terrain 99% of these trucks will ever have to handle, but they proved that they easily could.

On pavement, where they will surely live most of their “rugged” lives, they are absolute dream machines. This is especially true of the air-suspended models, which go over ruts and potholes like they’re lines painted on the road and cruise along as quietly as most luxury cars in their price range.

Jeep brought back the Wagoneer and Grand Wagoneer primarily because it got tired of watching customers outgrowing its models defecting to other brands in need of something in this segment.

It shouldn’t have to worry about that happening anymore.