Mike Pompeo alleging that the NIH tried to suppress a State Department COVID-19 probe, Fauci telling Americans to not be so ‘accusatory with China, and a Yahoo News reporter asking Jen Psaki about a possible White House cat round out today’s top media headlines.

Rep. Elise Stefanik, R-N.Y., revealed that CNN star Jake Tapper attempted to have her on his programs after the liberal anchor suggested that he would never book the high-ranking House Republican for an interview.

During a recent interview on The New York Times podcast “Sway,” Tapper seemed to indicate that all three Republican leaders in the House of Representatives were not welcomed on his CNN shows over their “lies” about the 2020 presidential election.

“Yeah, I mean this is something that I wrestle with every day… which is I have not booked, since the election, anyone who’s engaged in these lies. I just, I haven’t,” Tapper told podcast host Kara Swisher on May 27. “It’s not a policy but it’s a philosophy where I just don’t want to deal with it. I don’t want to deal and it really saddens me because there are Republican members of Congress with whom I respect, or formerly did… If you’re willing to lie about that, what else are you willing to lie about? And why should my viewers listen to you?”

“Yeah. Yeah. So who do you book?” Swisher asked. “It’s dwindling. It’s a dwindling group of people.”

“Well, I mean there’s about a third of the House Republican caucus that I am willing to book,” Tapper responded. “I could name them to you if you want.”

“I would not book Kevin McCarthy,” Tapper answered.

“Steve,” the Times host then said.

“No. Steve Scalise? I wouldn’t,” the CNN anchor replied. “Now if they came to me and said that they wanted to, I don’t think any of them, Scalise or McCarthy or Stefanik, have faced a tough interview at all about it. So I might be willing to interview one of them to talk about this, to talk about their election lies and what they’re doing. But I’m not asking for the interview and they’re not eager to do it, no.” 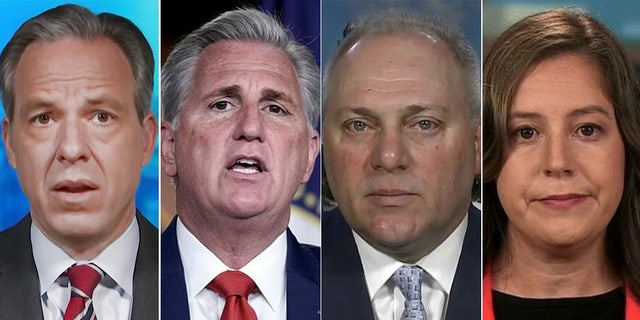 Well, according to screenshots of emails received by Stefanik’s staff, Tapper did attempt book her on his shows just weeks prior as she was being floated to replace Rep. Liz Cheney, R-Wyo. as the GOP Conference Chair.

“Hope you’re doing well! Wanted to check in to see if the Congresswoman might be available to join Jake a day this week in the 4-6pm hour,” a senior planning/editorial producer for “The Lead” wrote to Stefanik’s office on May 4. “Happy to get her on the phone with Jake prior to committing.”

In another email sent the next day, one of Tapper’s staffers expressed interest in booking her for his Sunday program “State of the Union.”

“Can you keep us posted if you think she’s doing anything Sunday, even if it’s for a different show? Of course we’d love to make it ours though! ;)” the CNN employee wrote.

Tapper fired back at the congresswoman, tweeting, “I can’t account for every email from my excellent bookers whose job it is to present me with as many options as possible. I have just refused to allow any of the Liars, such as Rep Stefanik, on air. Kind of stunning to see her proudly identify as a conspiracy theorist.”

His response to Stefanik, which he claimed he “can’t account” to what his bookers say in emails, did raise questions.

“Your ‘senior planning producer’ says ‘happy to get her on the phone with Jake prior to committing,’” Fourth Watch media critic Steve Krakauer reacted. “What’s that – to see if she’s game to comment on ‘the insurrection’? She’s trying to convince Stefanik’s team to get her on your show.”

A spokesperson for CNN pointed to Tapper’s tweet when asked for comment. CNN did not immediately respond to Fox News’ additional inquiries.

Interestingly, the email exchanges were made just one day before the CNN anchor tore into Stefanik over her support for former President Trump amid her ascent in GOP leadership.

“A lot of people who used to work with her in the Bush White House say that they don’t recognize her,” Tapper said. “And they don’t know if it’s an act or if she, you know, got a lobotomy.” 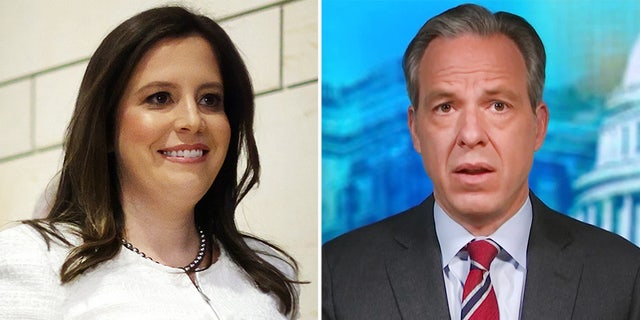 Last month, the CNN anchor did float banning Republicans from his programs over the “Big Lie.”

“The lie about the election on its own is anti-democracy and it is sowing seeds of ignorance in the populace and, obviously, it has the potential to incite violence, but beyond that is if you’re willing to lie about that, what are you not willing to lie about?” Tapper asked. “That’s where we are when it comes to the House Republican leadership McCarthy and Scalise and where we are with too many leaders of the Republican Party. They’re not willing to tell their voters the truth! What does that say about them?”

He continued, “How am I supposed to believe anything they say? If they’re willing to lie about Joe Biden wanting to steal your hamburgers and QAnon and the Big Lie about the election, what are they not willing to lie about? Why should I put any of them on TV?”