The coronavirus outbreak “is going to get worse,” Dr. Anthony Fauci, the nation’s leading expert on infectious disease, told lawmakers on Wednesday ― a warning that stands in stark contrast to the messages coming from President Donald Trump and Vice President Mike Pence.

The coronavirus has infected more than 110,000 people worldwide and is continuing to spread. The disease it causes, COVID-19, was officially declared a pandemic on Wednesday by the World Health Organization.

Fauci and other health experts have worked to emphasize the seriousness of the pandemic: While it’s impossible to predict at this point how many will ultimately be affected in the U.S., he said it could be “many millions” if the government and Americans don’t take steps to contain the outbreak.

“If we are complacent and don’t do really aggressive containment and mitigation, the number could go way up and be involved in many, many millions,” Fauci told the House Oversight Committee. “If we contain, we could flatten it.”

He and other public health experts have had to work to counter the number of misleading statements and full-blown lies that Trump has told about the coronavirus outbreak, some of which downplay how contagious the virus is and how dangerous the illness can be. Trump, for example, has repeatedly brought up the common flu, suggesting the coronavirus is no more serious.

Trump, meanwhile, has painted a wildly rosy picture of the outbreak and his administration’s response to it.

“Just stay calm. It will go away,” Trump said after a meeting with Republican lawmakers on Tuesday. “It’s really working out.” 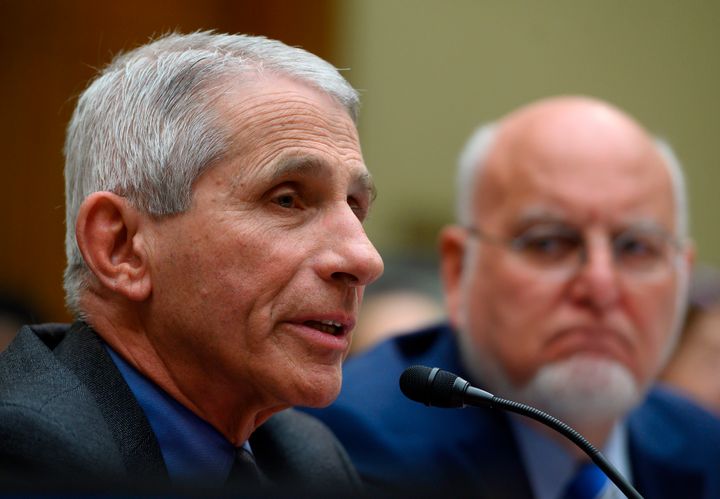 Trump’s comments Tuesday are the latest but perhaps most striking example of his attempt to downplay the severity of a disease outbreak that is quickly spreading around the globe.

Trump said last week that a vaccine would be ready within “months.” But federal health officials warn a vaccine likely wouldn’t be ready for public use for at least a year.

Since popping up at a wild animal market in Wuhan, a city of 11 million people in central China, the novel coronavirus has infected more than 113,000 people in more than 100 countries and killed more than 4,000, according to the WHO. In the U.S., at least 29 people have died and there have been nearly 1,000 confirmed cases, although the number of infections is likely far higher, as there’s been a shortage of tests.

The pandemic designation is reserved for epidemics that have “spread over several countries or continents, usually affecting a large number of people.” At a news conference in Geneva on Wednesday to declare COVID-19 a pandemic, WHO Director-General Tedros Adhanom Ghebreyesus said the organization is “deeply concerned both by the alarming levels of cases and severity and by the alarming levels of inaction.”

“The challenge for many countries who are now dealing with large COVID-19 clusters or community transmission is not whether they can do the same — it’s whether they will,” he said. “We are grateful for the measures being taken in Iran, Italy and South Korea to slow the virus and control their COVID-19 epidemics. We know that these measures are taking a heavy toll on societies and economies, just as they did in China.”

Asked which countries are failing to take adequate action, Michael Ryan, executive director of the WHO’s Health Emergencies Programme, refused to name individual countries but listed some of their shortcomings ― many of which describe the United States’ widely criticized response to the outbreak.

“The answer to that question is you know who you are,” Ryan said. “Some countries have not been communicating well with their populations and creating some confusion in the minds of the population.”