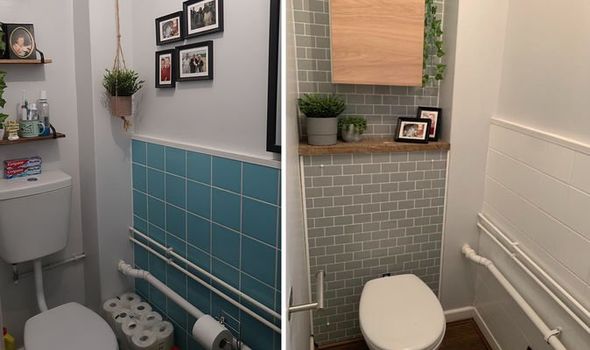 Nick Richards from Harlow, Essex helped his mum transform their downstairs toilet into a stylish space on a £120 budget. The 23-year-old told money-saving community LatestDeals.co.uk that they had originally done the makeover on a £50 budget but then wanted to do a slightly bigger one on a £120 budget. The part time retail worker and part time home improvement YouTuber said they originally improved the plain white room by adding hanging plants and picture frames on the wall.

However, they said the room always lacked storage space and was quite cluttered.

Like a lot of downstairs toilets, the system was on show which Nick said was “not the nicest thing to look at”.

Nick and his mum really liked the idea of having a grey and white-themed bathroom after seeing a photo of one online.

Nick said: “The big plan for this makeover was to get some kind of storage solution.

“We also knew we wanted to change the colour of the tiles, box in the toilet and create a little feature wall.

“We decided to keep the wall colour because we have a lot of that colour paint left over and we like the light grey on the wall.

“We got a new mirror but kept the towel rail as it was nice and secure on the wall.

“We also had really bright blue turquoise tiles in the bathroom and this didn’t work with our overall colour scheme so we had to figure out how to change it on a budget.”

Nick’s first step was to remove the screws and nails from the walls which had been holding the shelves up.

They got rid of the shelves because they meant “everything was on show” and you couldn’t “hide anything”.

They used Polyfilla on the hoes and then painted over them before starting on the rest of the project.

Nick’s main supplies were paint, paint brushes and a roller, which they already had.

The paint they used was Leyland standard white emulsion, which was originally bought for £12 for 10L.

For the wall colour, they used Dulux Rock Salt in silk.

“I actually got this on clearance last year for only about £5!,” Nick said.

They also painted their bathroom tiles white with some tile paint they picked up from Wilkos in their own brand for £15.

To make the physical box to hide the toilet, Nick picked up a sheet of scrap MDF and a couple of lengths of wood from a B&Q store from one of their wood charity bins.

He continued: “B&Q stores sometimes have charity bins of scrap wood where you give a donation to their charity and you can take whatever scrap wood you want, result!

“Good tip for anyone who just needs the odd piece of wood and doesn’t want to spend a lot of money.

“To make the tiled feature wall we bought two packs of self adhesive subway tile sheets, in grey, from Amazon. These were £32 a pack.

“It sounds quite pricey, but compared to buying actual tiles, adhesive and grout, this method is so much cheaper and it is so much easier just to stick the tile sheets straight onto the wall.”

The rest of their supplies were mainly from IKEA.

They bought a new bathroom cabinet for £30 which was the IKEA ENHET oak effect one, and a big mirror for £15 (IKEA Lettan 60x96cm mirror).

They saved money on decor by using fake plants and family photos they already had.

To make the toilet box, they made two L-shaped brackets out of wood which were placed either side of the toilet system to act as the main structure.

They were then screwed to the wall.

A sheet of MDF went in front of the bracket and toilet with a couple of screws in each corner.

He said: “The main challenge was to make sure that the box we built around the toilet was easy to remove in case we had any problems with the plumbing within the toilet system.”

To cover the top of the toilet they found an old scaffolding board in one of their neighbours’ skips which they cut down and placed onto the brackets.

They did not screw the shelf down as this ensured they could still have easy access to the toilet system by just removing the shelf.

Nick added: “We covered the entire box and wall with the self adhesive tiles and job done!”