Crown Resorts has handed over $9.7 million in termination payouts to three of the top executives who have departed the crisis-stricken casino giant as part of its boardroom exodus. 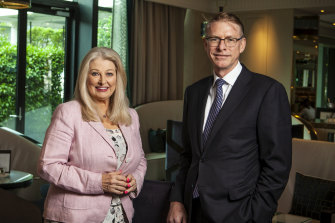 In her damning findings that Crown was unfit to hold its Sydney casino licence, former NSW Supreme Court judge Patricia Bergin said that Mr Barton was “no match for what is needed” at the group after evidence emerged he failed to act on evidence of money laundering in company bank accounts.

Mr Barton’s take home pay for the 2021 financial year, including his $1.9 million salary, was $5.4 million, the annual report says. He also received an extra $1.4 million for his accrued annual and long-service leave, bringing his pay for the year to $6.7 million.

Crown put Mr Barton on a six-month “consultancy” contract after his resignation to assist with “transition arrangements” and the ongoing inquiries into Crown’s licences, but the annual report does not disclose how much he was paid for this.

Barry Felstead – a long-time offsider to major shareholder James Packer who was criticised in the Bergin Inquiry over the arrest of 19 Crown staff in China on gambling crimes in 2017 – was handed a $3.2 million exit package, bringing his pay for the year to $4.4 million. Leave entitlements boosted that to $7 million.

Meanwhile, Crown’s president of strategy and development Todd Nesbit – who was responsible for overseeing the construction of Crown’s new tower at Sydney’s Barangaroo and faced accusations of workplace bullying last year – got a $3.1 million payout, boosting his take home pay for the year to $6.2 million. That jumped to $7.6 million with his leave entitlements.

Long-standing Crown boss John Alexander stood down as executive chairman in January 2020 but was paid $2 million to stay on for another 12 months as an “executive director”, the report says. The former Sydney Morning Herald editor didn’t get a termination payment, but cashed in $1.7 million worth of leave entitlements.

Helen Coonan, who served as executive chairman for part of the year after Mr Barton’s departure and resigned late last month after coming in for heavy criticism at Victoria’s royal commission into Crown, took home $1.3 million.

Crown’s annual report said that no short-term bonuses were paid and all options under its long-term incentive plan lapsed.