Bill Gates has been a favourite target of people spreading right-wing conspiracy theories in the past year. In posts on YouTube, Facebook and Twitter, he has been falsely portrayed as the mastermind behind COVID-19 and as a profiteer from a virus vaccine.

The popularity of those falsehoods have given more life to at least a couple of other unfounded claims about him, according to new research: that he has been colluding with the Chinese Communist Party, and that he is behind moonshot plans to stem climate change. 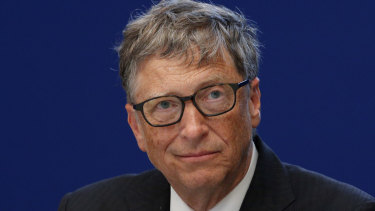 The internet is rife with conspiracy theories and untested claims about Microsoft billionaire Bill Gates.Credit:AP

“While it has been a significant accelerator over the past year and a half, the global pandemic isn’t the origin of many of the conspiracy theories about Bill Gates currently circulating across media,” said Jennifer Granston, head of insights at Zignal Labs. “Rather, it is the gasoline being poured on a fire that’s been smoldering for more than a decade.”

According to research from the media insights company Zignal Labs, which tracked narratives about Gates on social media and cable television and in print and online news outlets from June 2020 to June 2021, as many as 100,000 mentions were made in the last year about Gates’ connections to the Chinese government.

In one example, an article on The National Pulse, a far-right website, suggested without evidence that Gates, a co-founder of Microsoft, could have influenced the US relationship with China because a relative had once worked in a government job loosely related to US-China relations when President Joe Biden was vice president.

Another article in The National Pulse listed several instances in which Microsoft worked with Chinese companies, and people online pointed to this as evidence Gates must be conspiring with the Chinese government. Both articles potentially reached hundreds of thousands of followers on Facebook according to data from CrowdTangle, a Facebook-owned social media analytics tool.

“The global pandemic isn’t the origin of many of the conspiracy theories about Bill Gates. […] Rather, it is the gasoline being poured on a fire that’s been smoldering for more than a decade.”

Gates was mentioned another 260,000 times in falsehoods about climate change, according to Zignal. One unfounded claim is that Gates was funding a plan to dim the sun. (In reality, he is financially backing a small-scale experiment from Harvard University that aims to look at whether there are aerosols that could reduce or eliminate the loss of the ozone layer.)

In another, conspiracy theorists say that Gates is pushing a plan to force people in rich countries to eat only “100 per cent synthetic beef” because he had a financial stake in a company making those products. (Gates did say it was a good idea for developed nations to consider the idea, but it was part of a larger conversation about tech breakthroughs and energy policies to tackle the effects of climate change.)

Those falsehoods, while popular, still pale in comparison to those about his profiteering off the coronavirus. In one popular unfounded claim, Gates is accused of wanting to surveil the population with microchip vaccination implants (159,000 mentions).

Gates’ philanthropy work in distributing vaccines to developing countries had also been twisted into unfounded accusations that he was trying to cull the global population (39,400 mentions). And a third popular falsehood pushed by conspiracy theorists is the notion that Gates advocated vaccine passports in order to further a tech-enabled surveillance state (28,700 mentions).

According to Zignal Labs, the sharing of tweets linking Gates to the vaccine passport narrative actually spiked during the time of Gates’ divorce announcement from his wife of 27 years, Melinda French Gates, with whom he ran the Bill and Melinda Gates Foundation. The breakup has set off new scrutiny of his conduct in work-related settings.

“Bill Gates: privacy please everyone,” said one tweet, which was liked and shared more than 30,400 times. “Also Bill Gates: we need vaccine passports.”

The Market Recap newsletter is a wrap of the day’s trading. Get it each weekday afternoon