Sunday March 15, 2020, 2.15pm will be marked in the diaries of Australian airline executives as a pivotal moment. It’s the moment when the Australian government dropped the bombshell that all international travellers landing on our shores would be subject to a 14-day quarantine.

It was the moment the music stopped and brought our travel industry to its knees.

The major airlines' chief executives, Qantas’ Alan Joyce and Virgin Australia’s Paul Scurrah, had been tipped off by Transport Minister Michael McCormack that something big was coming. On Saturday night, their respective management teams worked furiously to formulate plans to get customers and their own crews back from international destinations. 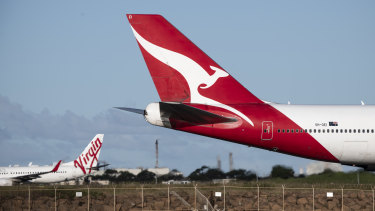 The music has stopped for Australia’s big airlines – and for the rest of the international aviation industry.Credit:Wolter Peeters

From a very large glass room in Qantas’ Mascot headquarters the carrier's crisis management team, composed of representatives from each of the airline’s critical divisions, was in overdrive.

Keeping a safe social distance, its members had been gathering daily in the airline’s equivalent to a ‘situation room’ over the past month since the coronavirus began its serious spread around Wuhan in China.

It became the bunker in which a corporate crisis intersected with a health catastrophe.

Over at Virgin Australia’s two key offices in Brisbane and Sydney’s CBD, its crisis management team was, and is, similarly in full strategy high-alert mode. Up to three times per day the crisis team members at Virgin are being called via their devices to answer the red alert call. They need only press the hashtag button and they are hooked into the meeting.

A chief medical officer is the pivotal operative for both the airlines’ crisis teams. They provide a daily update of transmission rates, deaths and risks to both staff and customers. The next most crucial member would traditionally be the person in charge of networks – he or she deals with decisions on capacity and routes. Yet with recent events going to the core of the airlines' viability, the finance function has moved to front and centre.

Bad as the 14-day quarantine was, Morrison upped the ante on Thursday, banning offshore visitors completely – isolating Australia from the rest of the world.

The industry is now in survival mode – suffering from its worst bout of what Joyce terms "constant shock syndrome". 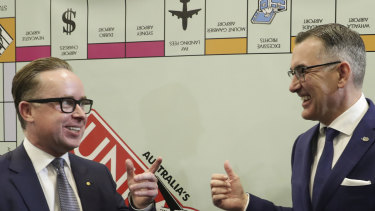 Rivals even during happier times, Alan Joyce and Paul Scurrah have become fierce opponents in the battle for government help.

Qantas can clearly out-survive Virgin, which has about $5 billion in debt and around $1 billion of cash on its balance sheet.

Unless the government steps in. It has already announced a $700 million assistance package – one which in reality won’t touch the sides for the aviation industry.

The increasing prospect of an aviation rescue package was enough to tip Joyce into action on Friday.

The behind-the-scenes tension between him and Virgin boss Scurrah simmering over the past couple of weeks moved to a public bare-knuckled brawl. Joyce came out swinging on the airwaves urging the government not to "nationalise" Virgin, branding it as "completely unfair".

He said the government should be treating the aviation sector exactly the same as other industries that have also been devastated by the damage of the coronavirus.

This is not a game of survivor, this is a global pandemic creating unprecedented challenges for our industry.

"When good companies have managed very well, the government should let them manage their way through this and not look after the badly managed ones – the companies that have been badly managed for ten years," Joyce said.

A more measured but clearly offended Scurrah hit back.

"This is not a game of survivor, this is a global pandemic creating unprecedented challenges for our industry.

"This is a global crisis particularly for the aviation and tourism sector and all airlines globally are feeling the pain…now is not the time for rivalry," he retorted.

'Not the time for rivalry'

"As an industry we need to work together to preserve as many jobs as we can to ensure tourism remains a thriving sector in Australia."

"I think I have spoken with Australian airline executives on the phone almost every day for the past few weeks and will continue to work with them to make sure they receive the support they need," he said.

"Providing this assistance not only helps our airlines, but also the entire aviation industry, regional Australians in particular and other industries such as tourism and trade, which depend on aviation," McCormack added.

It may not suit Qantas, but all the noise from the government suggests it has more fuel in the tank to support aviation.

And according to Scurrah, Virgin has been "encouraged by recent support from the government this week and comments that they stand ready to continue supporting the industry as a whole".

He wouldn't respond directly to suggestions Virgin has asked the government for $1.5 billion in assistance.

"My discussions with the government first and foremost were to make sure that if this is a prolonged crisis, then the entire aviation and tourism sector will need some help. And it is the prudent thing to be discussing."

He said that if government assistance was needed he said there would need to be "agreed facilities in place today that we know we can trigger".

But how much exactly is needed?

"Nobody has a crystal ball, and we are dealing with the here and now," Scurrah said.