Anna Wintour has been editor-in-chief of the US edition of Vogue since 1988; the artistic director of Vogue's parent, Condé Nast, since 2013; and the company's global content adviser since 2019.

On Tuesday, as part of a larger revamping, Condé Nast announced Wintour will have a pair of new titles — worldwide chief content officer and global editorial director of Vogue — giving her final say over publications in more than 30 markets around the world. 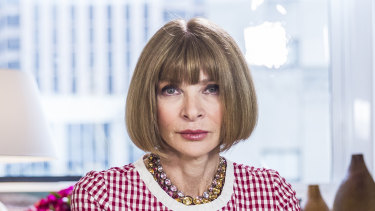 Edward Enninful, the most powerful black editor at Condé Nast, was made head of Vogue's editions in Britain, France, Italy, Germany and Spain. Simone Marchetti will become European editorial director of Vanity Fair, putting him in charge of its editions in France, Italy and Spain. The US and British versions of Vanity Fair will remain under the control of Radhika Jones.

Of the six newly created top leadership roles within the editorial division, two went to people of colour. Condé Nast said worldwide editorial directors would be named for its other publications early next year.

Until now, international editions of many Condé Nast titles were run largely by the top editors in the countries where they are based.

With the shake-up, the leadership team in New York will have more oversight as part of what the company described in a news release as the "global unification of the brand editorial teams."

The further elevation of Wintour, 71, comes after she was criticised by members of her own staff for fostering a workplace that sidelined women of colour. The move also comes as a riposte to years of whispers, in gossip columns and at fashion-industry parties, that she would be leaving Vogue.

Roger Lynch, Condé Nast CEO, made his support clear in a statement on Tuesday. "Anna's appointment represents a pivotal moment for Condé Nast as her ability to stay ahead in connecting with new audiences, while cultivating and mentoring some of today's brightest talent in the industry, has made her one of media's most distinguished executives," he said.

The New Yorker is one Condé Nast publication that is not part of Wintour's purview. David Remnick, the magazine's editor since 1998, will continue to report directly to Lynch, as does Wintour. The New Yorker has started to outshine Vogue in the United States and is on a pace to surpass the fashion glossy as Condé Nast's biggest contributor to US profits by the end of the year.

Shortly before the corporate restructuring and promotion of Wintour, three powerful editors of Vogue's top international editions left the company.

Angelica Cheung, head of Vogue China for nearly two decades, stepped down last Tuesday. Vogue China, among Condé Nast's best-performing titles, is one of the rare US media brands that has gained a large following in China.

Soon after Cheung's exit, Christiane Arp, head of Vogue Germany, announced her departure. Also this month, the head of Vogue Spain, Eugenia de la Torriente, said she would be leaving the company.

The changes come as the company grapples with declining ad sales and staff unrest over issues of diversity and inclusion. The company has also had to contend with a shrinking base of print readers, which has led to layoffs and pay cuts.