Mr St Baker, whose interests straddle both sides of the clean energy transition including the Vales Point coal power generator in NSW and electric-vehicle charging firm Tritium, on Wednesday hit out at the suggestion that banks and insurers had an obligation to take into account long-term financial risks posed by global warming when assessing their future involvement with fossil fuels. 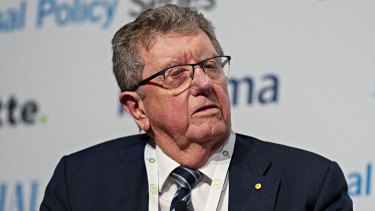 “As for this crap that the banks have to look at their climate risk, the risk of banks not investing in essential industries for Australian wealth if they go out of business… it will destroy economies,” he told the Credit Suisse 8th Australian Energy Conference.

Across Australia and around the world, a growing number of banks, insurers and institutional investors have either begun divesting coal assets or pledged not to make new investments in coal due to its contribution to global warming. The finance industry is also taking a harder line against oil and gas producers, leading to potentially higher costs of capital and rising insurance premiums.

“This is rational stuff,” he said. “These are real things for banks to think about.”

Stephen Craen, of Providence Asset Group, told the Credit Suisse conference that 2021 was emerging as a “watershed” year on climate change, making it difficult for banks to know what their policies should be.

The International Energy Agency last month said investors should avoid funding new oil and gas projects if the world was to limit global temperature rises to 1.5 degrees; the UN climate conference COP26 will be held in November; ExxonMobil has faced a shareholder revolt replacing three board members with green-leaning nominees, and Shell has been ordered by a Dutch court to commit to vastly stronger emissions reductions.

“We’ve seen it to some extent in terms of arms and tobacco … we’ve certainly seen it in coal,” he said. “And we will see it increasingly in oil and gas as well.”

The clean energy transition has been accelerating in Australia as coal-fired power generators in Australia have faced increasing pressure from an influx of cheap renewables threatening their viability. EnergyAustralia this year announced it would bring forward the closure of Victoria’s Yallourn brown coal generator, while energy analysts have suggested Vales Point, backed by Mr St Baker’s Delta Energy, could also be forced to close earlier than scheduled.

Although wind and solar’s share of the nation’s power mix is growing, they presently account for less than 30 per cent of energy generation, and coal remains the dominant source. Mr St Baker said coal plants had a long future.

“On any projection at all, there will be coal-fired power generation in 20 years’ time and probably in 40 years’ time in some percentage in Australia,” Mr St Baker said, rejecting suggestions expressed by prominent investors and analysts that fossil fuels may be facing a watershed moment this year.

“The watershed is the product of the continual day-to-day public ignorance, reading sensationalist media,” he said.