Calm, the maker of a meditation, sleep and relaxation app, has doubled its valuation to $US2 billion ($2.7 billion) after raising capital from existing backers including Lightspeed Venture Partners, TPG and Insight Partners.

"With companies now taking mental well-being at work seriously, there's so much opportunity, and we raised capital to be able to put the foot down on the gas even more," co-founder and co-Chief Executive Officer Alex Tew said in an interview with Bloomberg. 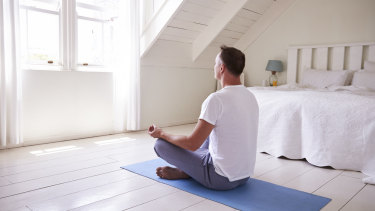 Calm’s daily downloads have doubled from a year ago as people look to cope with pandemic-induced stress and anxiety.Credit:iStock

Tew said there's been an "acute" response from corporations seeking to alleviate anxiety and depression during the COVID-19 pandemic. American Express cardholders in the US and certain other countries, along with more than 12 million members covered by health-care provider Kaiser Permanente, currently have access to Calm at no additional cost.

San Francisco-based Calm, which has been profitable since 2016, counts Goldman Sachs and Marc Benioff, the billionaire CEO of Salesforce.com, as new investors in the firm's latest funding round, which totalled $US75 million. Actor Ashton Kutcher's Sound Ventures, an earlier investor, also participated in the latest round. In addition to producing and acquiring new content, Calm hopes to use its freshly fortified balance sheet to grow through dealmaking.

"We're interested in acquisitions of other businesses and growing Calm through M&A," said co-founder and co-CEO Michael Acton Smith, declining to provide specifics. He said that the company — which has partnered with the likes of singer Harry Styles, actor Matthew McConaughey and musician Moby — will pursue deals with new talent and continue its international expansion. This week, it's adding content in Japanese, its seventh language, after English, German, French, Spanish, Korean and Portuguese.

Mental health has received increased attention during the COVID-19 pandemic as the global population grapples with disease prevention, the deaths of family and friends, and isolation caused by social distancing and stay-at-home mandates.

Calm says it has more than 100 million downloads and 4 million paying customers. Daily downloads have doubled in 2020 from a year ago, and users have listened to more than 1 billion minutes of content this year, up 100 per cent from 2019.

Like so-called "super-apps" WeChat and Gojek, the Calm app offers a variety of services. Its features include music, a conversation-based series called "The Spark" that's akin to a podcast, content for children and teenagers, and mood check-ins and journaling, in addition to meditation programs and stories meant to help users fall sleep.

"If meditation was Act I, and sleep stories in Act II sent engagement up threefold and dramatically increased retention, I'm very excited for Act III," said Nicole Quinn, a Lightspeed partner who led Calm's latest fundraising round and joined its board.

The company — previously valued at $US1 billion, according to PitchBook — has now raised $US217 million. Bloomberg reported in October that it was in talks to raise capital and double its valuation.