California’s state Republican Party is warning that a new move by Gov. Gavin Newsom to ultimately ban the sale of new gas-powered vehicles by 2035 could lead to more than 350,000 job losses.

“Governor Gavin Newsom’s failure to lead California was on full display today as he talked about eliminating over 350,000 good-paying jobs in our oil and gas industry, while ignoring the millions of already unemployed Californians and the tens of thousands of shuttered businesses,” Chairwoman Jessica Millan Patterson said in a statement.

Newsom on Wednesday signed an executive order that will end the sale of all gas-powered vehicles, although it won’t stop people from owning such cars and trucks or re-selling them on the used car market. He also called on state legislators to also ban fracking, but has not yet moved to do so himself.

It’s part of an increasingly aggressive push by some "blue states" and Democratic lawmakers in Congress to attempt to limit the effects of climate change, a push that Republicans have said will cost jobs and limit economic growth. 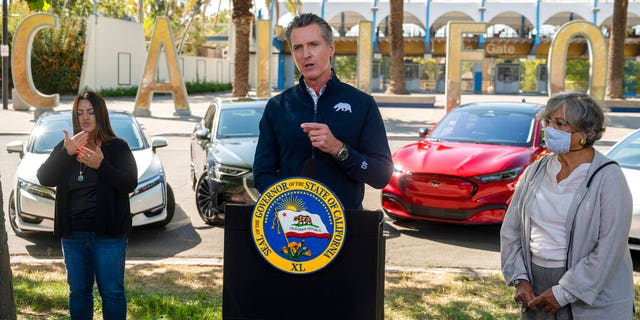 California Gov. Gavin Newsom speaks at a press conference on Wednesday, Sept. 23, 2020, at Cal Expo in Sacramento where he announced an executive order requiring the sale of all new passenger vehicles to be zero-emission by 2035. (Daniel Kim/The Sacramento Bee via AP, Pool)

Newsom's move would make California the first state in the U.S. to make such a commitment, although some European countries have made similar commitments. The Los Angeles Times reported that while the order calls ending the sales a “goal,” it also orders the Air Resources Board to immediately begin drafting regulations to achieve it by that year.

“Pull away from the gas pumps,” Newsom said. “Let us no longer be victims of geopolitical dictators that manipulate global supply chains and global markets.”

He claimed the order will reduce greenhouse gas emissions by 35 percent and said that electric cars and trucks are “the next big global industry and California wants to dominate it.” California is both the largest new car market in the U.S., with 1.8 million vehicle sales in 2019, and also accounts for the most electric car purchases of any state.

Newsom signed the order on the hood of an electric-powered Ford Mustang and called it a “policy for other states to follow.”

But the state’s Republican Party is looking at what it believes could be well over a quarter of a million jobs lost by the move, particularly at a time where the state has lost jobs related to the coronavirus pandemic. Industry groups have estimated 366,000 jobs in the state are supported by the oil and gas industry.

“It would be nice to dominate in something other than having the highest homelessness, highest poverty rates, highest gas taxes and the worst business climate in the nation. But given today’s press conference, Californians will have to wait until we get a replacement for Governor Newsom,” Patterson said.

Newsom's order was praised by environmental groups, but opposed by the oil industry and groups representing the automobile industry, which called for the move to happen by cooperation, not mandate.

The state GOP’s stance was shared by the White House.

Fox News' Gary Gastelu and The Associated Press contributed to this report.