Business leaders have called for support for the tourism industry, depreciation allowances to encourage investment and incentives for people to buy new cars as part of the federal government’s stimulus package in response to the coronavirus outbreak.

Drinks giant Coca-Cola Amatil boss Alison Watkins said a broad-based business investment allowance that "encourages and accelerates investment", and helps boost productivity and economic growth would be a significant aid to business. "Outside of the mining industry, investment has been really quite weak over almost 10 years now. And we really would love to see an acceleration of that investment, because ultimately it's that that will underpin growth for our economy, jobs and wages growth," she told The Age and The Sydney Morning Herald. 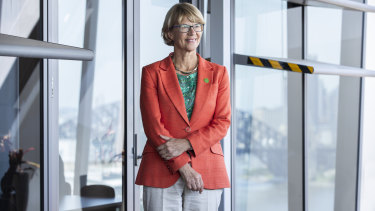 Coca-Cola Amatil boss Alison Watkins says that excluding the mining sector, business investment in Australia has been weak for nearly a decade.Credit:Louie Douvis

"With that kind of investment allowance it could be structured in a number of different ways but it should be a pretty broad-based one. So let's not put too many constraints around it," Ms Watkins said.

Qantas and Virgin Australia have called for support that boosts tourism as the virus continues to decimate airlines and the tourism sector. Australia generated almost $60 billion in direct tourism GDP in 2017-18, according to the latest figures from Tourism Australia.

"We are very keen to see the government stimulate and we're supportive of measures that reassure travellers that it's okay to travel, particularly domestically," Virgin Australia chief executive Paul Scurrah said.

A Qantas spokesman said: "Anything that supports broader economic activity is ultimately good for the travel industry, but specific support for tourism given the challenges many operators are facing from coronavirus on top of bushfires would be very well received."

Australia's listed car retailer AP Eagers called for a "cash for clunkers" scheme which would offer a cash payment for consumers selling their old cars for a new one. The company wants the scheme to be included in the federal government's stimulus package to be announced next week. "We do believe that after these 23 months of decline and the further headwinds ahead, that we can't see any catalysts at the moment for the 23 months not becoming 30 months," chief executive Martin Ward said.

The car group's chief operating officer Keith Thornton also backed an accelerated depreciation investment allowance and tax breaks on purchases of relatively new, second-hand cars. "A true cash for clunkers scheme is a scrappage program," he said, that also gave people who were not in the market for a new vehicle enough incentive to buy one. To be effective, motorists ditching a "clunker" would have to receive at least $5000, he said.

Lindsay Partridge, the boss of brick manufacturer Brickworks, backed an accelerated depreciation allowance and more infrastructure investment. "We're desperately short of infrastructure," he said. "We need water, we clearly need power, there's a thousand really decent projects we could do to continue to build this country. Those things won't be as quick to go, but there must be some surely that are shovel ready."