Former Senate Majority Leader Harry Reid lies in state in the U.S. Capitol Rotunda. Reid died on Dec. 28th at the age of 82

Harry Reid, a longtime Democratic U.S. senator from Nevada who rose to serve as Senate majority leader from 2007 to 2015, is lying in state at the U.S. Capitol Wednesday.

Reid died in December at age 82.

Reid, who was diagnosed with pancreatic cancer in 2018, served in Congress from 1983 until his retirement in 2017. He announced in 2019 his cancer was in remission. 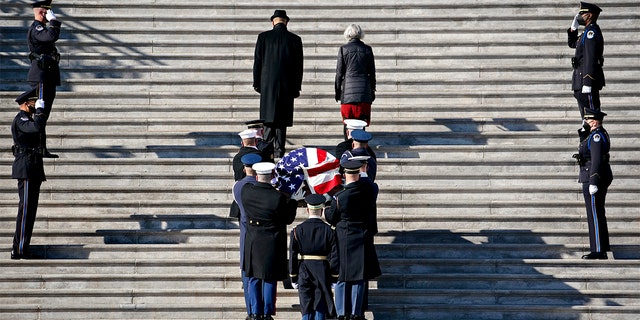 The flag-draped casket of the late Sen. Harry Reid arrives at the U.S. Capitol, where he will lie in state, Wednesday, Jan. 12, 2022 in Washington.
(Al Drago/Pool via AP)

He became most well-known for his use of the “nuclear option” in 2013, leading the charge to end the filibuster on executive branch and judicial nominees other than to the Supreme Court.

“Harry Reid was one of the most amazing individuals I’ve ever met,” Senate Majority Leader Chuck Schumer, D-N.Y., said in a statement Tuesday. “He was my leader, my mentor, one of my dearest friends.”

Reid played a central role in helping push the agenda of former President Barack Obama, leading the charge to unify all 60 members of the Democratic caucus in support of the Affordable Care Act in 2009.