Britain's Big Four accountants have employed more than 2000 members of the Chinese Communist Party (CCP), including at least one partner in every firm.

At least 400 KPMG staff had CCP membership in 2016, according to documents seen by UK newspaper The Daily Telegraph – with one partner praised by a Chinese state website for "making the red gene take root". Meanwhile EY and Deloitte each employ more than 800 party members, including Deloitte's deputy director in China. Some senior staff at PwC are members too, including at least one partner.

The CCP demands absolute loyalty from members and is increasingly keen to monitor private firms. Relations between Beijing and the West have deteriorated sharply this year, with the regime accused of brutal human rights abuses against its Uighur Muslim minority and a crackdown on liberty in Hong Kong. 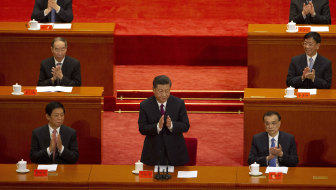 Chinese President Xi Jinping with members of the Communist Party.Credit:AP

British Tory MP Bob Seely, a member of the UK parliament's foreign affairs select committee, said: "This is a bizarre and scandalous state of affairs.

"Putting aside any espionage risk, which is clearly highly serious in itself, surely there are significant questions to be answered about client confidentially. If I was a client of these firms, would I really want my sensitive business information being discussed by people with links to a one-party state?

"I do think we need to be clear about both the undoubted opportunities, but also the very obvious risks, of business with China."

There is no evidence to suggest that any of the CPP members have prejudiced the interests of clients.

On Monday, The Telegraph revealed that senior figures in financial institutions including Deutsche Bank, HSBC and Standard Chartered were members of the CCP, as well as the owners of Wolverhampton Wanderers football club. Yang Jie, a partner at KPMG China, is quoted on a government website praising the country's government and its authoritarian president Xi Jinping.

She is quoted as saying: "We often organise to learn the spirit of the Party and Xi Jinping thought to improve and arm ourselves."

The site credits Ms Yang for ensuring that KPMG's senior management pays attention to the party. It says that "making the red gene take root in KPMG and passing that on through generations became Yang Jie's main goal at work".

A picture of KPMG staff holding a Communist Party flag, with the phrase "Huazhen KPMG certified public accountants Shenzhen branch committee" has been shared by staff on social media.

The details are contained in a leaked CCP membership list for Shanghai and the surrounding area. According to a verification report by tech group -Internet 2.0, this list was extracted from a database management server on April 16, 2016.

A spokesman for the International Parliamentary Alliance on China (Ipac) said the list's revelations were disturbing and called on companies to "set out how they intend to safeguard their values".

Ipac was one of the first organisations to obtain the document in the West.

Many successful business figures are members of the party in China, including tech billionaire Jack Ma who is one of the country's richest men. Many Western companies believe that close links with the authorities are essential for doing business.

The auditors' Chinese branches are also run independently of their British arms.

Nevertheless, critics said the revelations were concerning. The Big Four audited all companies in the FTSE 100 index as of September this year, and earn millions of pounds from government consulting contracts. They are also major players in other Western countries including the US and Australia.

Matt Kilcoyne, deputy director of the Adam Smith Institute, said: "Companies that have benefited from an opening up of the global economy cannot hide behind local cultures when they're found out collaborating with communism. China is not some small country of which we know little. It is the world's second largest economy, and its largest dictatorship.

"Consumers in our society that disagree with CCP members having power over decisions at these firms, or who think companies should be less entangled with a country that locks up British nationals, disappears political opponents, and is accused of genocide against the Uighur, can and perhaps should exercise their free choice in our free society to choose another enterprise with which to do business."