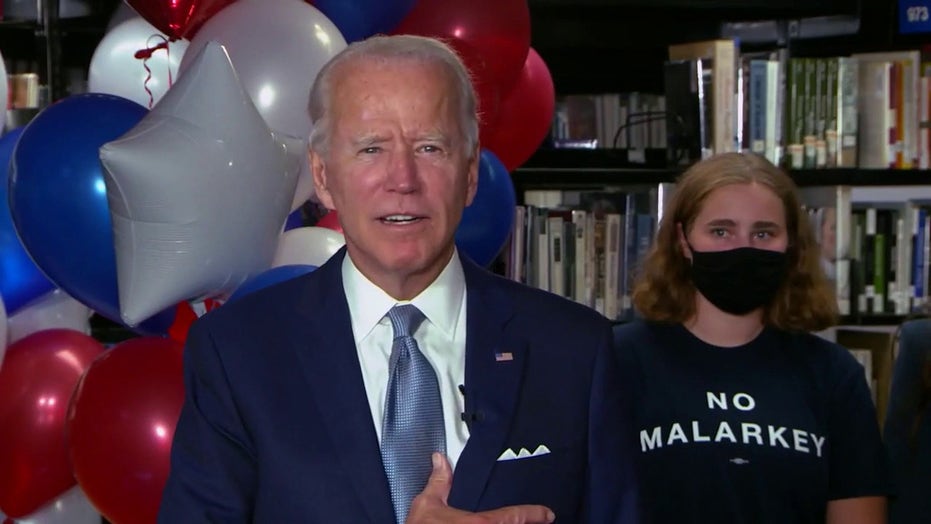 After a half-century in elective politics and three presidential runs, former Vice President Joe Biden on Thursday night will deliver the most important address of his career.

Biden will formally accept his party’s presidential nomination, spell out his “positive vision for the country” and make the case to fire President Trump, as he gives a speech that will serve as the crowning and conclusive moment of the four-day Democratic National Convention.

In an intriguing dynamic, hours before Biden goes under the glare of the prime-time spotlight, the president attempted to eviscerate his Democratic challenger during a campaign stop just outside of Scranton, Pa., where the former vice president was born and spent his early childhood years.

Also speaking on the closing night of the convention are some of the female politicians who were in contention to be Biden’s running mate, and four of his rivals from the 2020 nomination race – including former New York City Mayor Mike Bloomberg, whose inclusion in the program has infuriated some progressives.

Biden, who will give his address from a convention center in his hometown of Wilmington, Dela., speaks on a night when the convention’s theme is “America’s promise.”

Biden deputy campaign manager Kate Bedingfield previewed that her boss will “lay out his positive vision for the country and reaffirm his core belief that we can reunite this country even in these divisive times. … You’ll hear Biden lift up the strength of the American people and lay out a vision for how we build back better and emerge from these crises stronger than ever before.”

Aides say the speech will meet the moment. Amid a coronavirus that’s taken the lives of more than 170,000 Americans and an economy flattened by the pandemic, Biden’s speech will be more solemn and restrained than swaggering and celebratory.

"We can’t go back to the way things were before these crises, because things weren’t working for far too many Americans," Biden wrote on Twitter. "Tonight, we’ll discuss our plans to build back better and set this nation on a new path.

Ahead of the convention session, Biden’s team unveiled a new ad that targeted what the campaign called “Trump’s failed leadership” and emphasized Biden’s “tested record.” The campaign said the ad would run in key general election battleground states and on national cable TV.

Biden often showcases his roots as a young child in Scranton, growing up in a working-class family. He made a campaign stop in the city last month and visited his childhood home.

The president’s been campaigning in key general election battleground states all week – to coincide with the Democratic convention. So a stop in the battleground of Pennsylvania to deliver some counter-programming hours before Biden gives his address came as no surprise. But by parachuting into the vicinity of Scranton, Trump is evidently trolling his Democratic challenger.

“Tonight, Joe Biden will speak at the Democrat Convention—and I am sure he will remind us that he was born in Scranton. But here’s what Joe Biden WON’T tell you: he left Scranton 70 years ago and he has spent the last half century in Washington selling you out and ripping you off! Joe Biden has spent five decades in Washington betraying the people of Scranton,” the president said in prepared remarks.

“Joe Biden is no friend of Pennsylvania – he is your worst nightmare,” the president argues.

He'll have another shot at taking on Biden when he does an interview with Fox News' Sean Hannity Thursday night.

Biden campaign senior adviser Symone Sanders said she welcomed Trump’s stop near Scranton, noting that it will sharpen the contrast with the Democratic standard-bearer.

Other speakers leading up to Biden on Thursday evening are Sens. Tammy Duckworth of Illinois and Tammy Baldwin of Wisconsin, and Atlanta Mayor Keisha Lance Bottoms, who had been eyed as possible vice presidential picks before Biden announced Sen. Kamala Harris of California last week as his running mate.

THE LATEST FROM FOX NEWS ON THE DEMOCRATIC CONVENTION

Bloomberg senior political adviser Kevin Sheekey – who managed the former mayor’s short-lived and unsuccessful 2020 presidential campaign – said that “you should expect Mike to make what might be the most important argument of this campaign to swing voters in battleground states: that Donald Trump has lied to them.”

Ahead of Bloomberg’s speech, progressives continue to fume that the Republican-turned-independent-turned-moderate Democrat is being given a high-profile speaking slot on the final night of the Democratic convention. And some charged that Bloomberg’s reneged on his pledge to throw his fortune behind the general-election effort to defeat President Trump. A New York Times piece points to a tweet from progressive activist Amy Siskind who charged Bloomberg “stiffed our party.”

But Bloomberg has opened up his wallet.

Fox News confirmed this week that Bloomberg plans to spend $60 million of his own money to help Democrats strengthen their majority in the House of Representatives in this year’s elections. Bloomberg’s also helping Democratic candidates and causes this cycle through Everytown for Gun Safety. The nonprofit group founded and funded by Bloomberg that fights to combat gun violence has committed to spending $60 million this year’s elections. He’s also contributed millions to other groups helping Democrats in down-ballot races and voter protection groups, and earlier this year Bloomberg also transferred $18 million from the campaign coffers of his failed White House bid to the Democratic National Committee.

While those contributions are a massive sum, they pale in comparison to the more than $1 billion of his own money that Bloomberg shelled out on his 2020 White House bid.