Emphasizing that “we are committed to stop the hatred and the bias,” President Joe Biden on Thursday signed into law a bipartisan bill that would speed the review of hate crimes and make it easier to aid in their reporting.

The president spoke before signing the COVID-19 Hate Crimes Act, a measure that overwhelming passed both houses of Congress and which was spurred by the reported surge in anti-Asian hate crimes amid the coronavirus pandemic, which originated in China before sweeping the globe.

Repeating a line that he’s often used, Biden said that “hate can be given no safe harbor in America.” And he emphasized that “right now, this is a critical problem, hate crimes being under reported.” 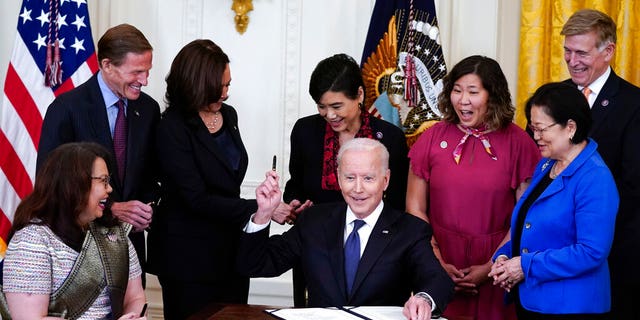 The new law aims to tackle that problem by creating a new Justice Department position to expediate the review of potential COVID-19-related hate crimes which are reported to federal, state, or local authorities. And it will expand efforts to make the reporting of hate crimes more accessible at the local and state levels.

And Biden pledged that “with this new law, the Department of Justice and this entire administration is going to step up.”

Preaching bipartisanship in a nation extremely divided along partisan lines, the president noted that “I believe with every fiber in my being that there are simple, core, values and beliefs that should bring us together as Americans. One of them is standing together against hate, against racism, the ugly poison that has long haunted and plagued our nation.”

And pointing to the bipartisan audience at the White House bill signing ceremony, Biden said “you’ve taken that first step, that important step.”

The measure passed the Senate 94-1 last month before sailing through the House this week by a 364-62 vote.

And Biden, who made a pledge to work with Republicans a pillar of his 2020 campaign for the presidency, praised the lawmakers from both parties who spearheaded the bill for “showing that our democracy can work and deliver for the American people.”

But the president, raising his voice, warned that “every time we let hate flourish, we make a lie of who we are as a nation.”

He urged that “we cannot let the very foundation of this country continue to be eaten away” and said that “I look at this law that you passed as maybe the first break, the first significant break in a moment in our history that has to be turned around.”

Harris, speaking ahead of the president, acknowledged that with the bill signing, “our work will not be done. Here is the truth. Racism exists in America. Xenophobia exists in America. Anti-Semitism, Islamophobia, homophobia, transphobia, it all exists. And so the work to address injustice, wherever it exists, remains the work ahead.”

Moments before the president was about to sign the bill into law, he was interrupted by the sound of a ringing cell phone.

“I don’t know who’s calling, but tell them we’re busy,” the president quipped, to laughter.