Sen. Bernie Sanders (I-Vt.) has spent the last year campaigning for the Democratic presidential nomination the only way Bernie Sanders knows how to campaign. He’s run as an unabashedly progressive, issues-driven candidate, determined to make democratic socialism palatable. He’s headlined massive rock-concert-like rallies and promised that record numbers of young voters would turn out to the polls.

The strategy was validated early with a blowout victory in the Nevada caucuses, powered by Latinos of all ages, the demographic group that his campaign had been boasting would be his secret weapon. If Sanders could also energize a larger base of working-class Americans behind him, it likely would be enough for him in a fragmented Democratic field of strong contenders.

Then it fell short.

On Super Tuesday, Sanders didn’t end up running in a packed field. The day before the election, Sen. Amy Klobuchar of Minnesota and Indiana’s Pete Buttigieg dropped out and threw their weight behind Joe Biden. Former presidential candidate and Texas darling Beto O’Rourke endorsed the former vice president too, as did influential leaders like Rep. Bobby Scott of Virginia, who has sway with Black voters in his state, and former Senate Majority Leader Harry Reid of Nevada.

“That was an unprecedented event — that candidates drop out before Super Tuesday,” Ben Tulchin, a pollster working with Sanders said. The campaign expected the consolidating to come after Super Tuesday, not before, he said.

Sanders essentially ended up in a head-to-head match-up against Biden, who outperformed the polls and claimed victory in states that Sanders was expected to win, like Minnesota, Maine and Texas. Southern Black voters ― particularly the older ones, who reliably vote ― picked Biden, not Sanders. Undecided voters overwhelmingly broke for Biden in the final days before the primaries in 14 states, according to the exit polls.

“I think that Bernie’s vote … is what we would have predicted,” Larry Cohen, who chairs the board of Our Revolution, the political action organization backing Sanders candidacy. “What changed? The Biden vote surged.”

For the weeks leading into Super Tuesday, the biggest night in the Democratic race, with a third of all the national pledged delegates were up for grabs, Sanders looked like he needed to win 25% of the vote. Sanders found himself explaining past comments about Cuban dictator Fidel Castro. His TV ads hitting Biden and linking Sanders with former President Barack Obama came the day after the losses on Super Tuesday, not before. And Sanders said he was “disappointed” with the youth turnout.

“The commercials that came out today, those commercials should have been out since Jan. 1 in South Carolina and with more Black faces,” Marcus Ferrell, who ran Sanders outreach to Black voters in 2016 and remains a supporter of his candidacy, said on Wednesday of the ads hitting Biden on his past positions on Social Security.

Sanders on Wednesday held a press conference making it clear that he now sees the race as a two-person battle between him and Biden. That will change the campaign’s early calculations.

“The fact that they pulled the stunt that they did the day before the election — how many more rabbits can (Biden) pull out of the hat?” Tulchin said of the endorsement surge for the former vice president. “It’s a whole new race as of today between Bernie and Biden. It’s a dramatically different race. It’s a refresh and a restart. You start fresh.”

In an interview on CBS News’ “60 Minutes” that aired the day after his victory in Nevada, Sanders stood by his past remarks giving measured praise for the improvements Castro made to the island nation’s health care and education systems, even as he vehemently condemned the authoritarian style of government. He would double down on the stance in a televised CNN town hall in Charleston, South Carolina. Elected Democrats across Florida, home to the country’s largest community of Cuban-Americans, condemned Sanders. Even a spokesperson for the Democratic National Committee got in on it with an implicit swipe at Sanders’ remarks.

Whether Sanders’ stance inflicted tangible damage on him, they underscored the dynamic of the week between his triumphant Nevada win and the disappointing South Carolina results ― near-constant attacks alleging that his left-wing views would be toxic in a general election, both for him and for down-ballot Democrats.

“Getting caught up in debates about Fidel Castro is never a good idea,” said Irene Lin, a Sanders supporter and alumna of the 2012 Obama campaign, who is now running the New Hampshire gubernatorial bid by Democrat Andru Volinsky.

Overall, Lin argued that Sanders needed to do more to put mainstream liberals and moderates at ease with his candidacy and the prospect of his electability in a match-up with President Donald Trump, regardless of how promising national polls had shown he would fare as of now.

It did not help matters, she suggested, that outspoken ― and sometimes highly controversial ― leftists make up a disproportionate share of Sanders’ team of surrogates. Even as she singled out Rep. Ro Khanna (D-Calif.), who is fond of framing Sanders’ policies as an extension of President Franklin Roosevelt’s New Deal, as an exceptionally gifted surrogate, Lin panned intellectuals like Naomi Klein and left-wing Hollywood star Jon Cusack.

“Every time I hear Ro, I wish we have more of those folks instead of Jon Cusack ranting about [left-wing academics Howard] Zinn and [Noam] Chomsky,” she said.

Khanna prefers to reiterate his pitch that Sanders, who as an independent caucuses with Senate Democrats, is someone committed to completing the Democratic Party’s historic vision, rather than a foe of the party as such. It’s a technique that diverges from the more radical encomiums of other campaign allies. At a rally in Tacoma, Washington, in mid-February, Seattle Councilwoman Kshama Sawant, a socialist, explicitly framed Sanders’ bid as the vanguard of a “powerful socialist movement.”

“We have to frame progressive policies as pro-entrepreneurship, pro-American competitiveness, and pro-economic growth,” said Khanna, a campaign co-chair. “Democrats overwhelmingly want Bernie’s policies. The challenge for the progressive movement and our campaign is to position them as forward-looking and fulfilling FDR’s New Deal promise.” 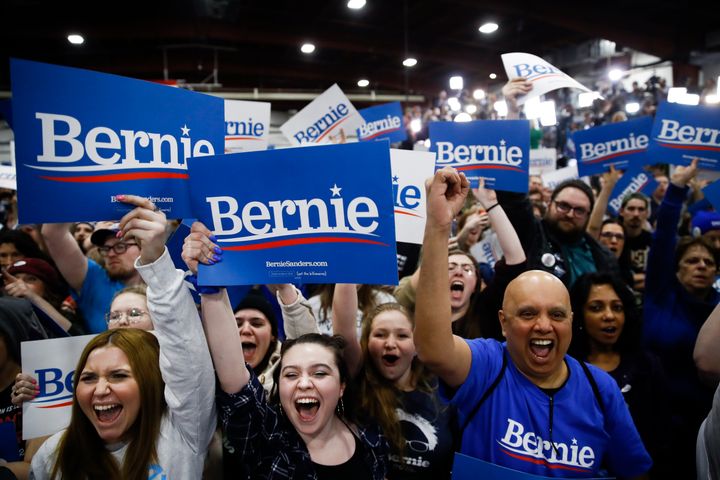 But even after Nevada temporarily made him the frontrunner in the Democratic race, Sanders himself never quite gave up his mantle as an anti-establishment renegade. He continued to rouse supporters with his insistence that the campaign’s success was frightening the “establishment.” Meanwhile, Biden’s campaign was racking up influential party endorsements.

“At some point, you’ve got to be co-opting and welcoming of the establishment,” Lin said.

Signs have already emerged that Biden’s campaign is reaching out to progressives. His team invited Sean McElwee, who runs the progressive think tank Data For Progress, to its headquarters to talk climate policy on Wednesday.

Whether Sanders makes such efforts to broaden his support has long been a concern among Democratic officials working in the political trenches, especially in swing states and districts.

“In politics, it’s always a harder climb when you have to explain to voters or persuade voters,” Abbi Easter, a Virginia Democratic Party leader said of Sanders’ abilities to expand his base in more conservative districts going into Super Tuesday. “When you have to tell voters, ‘No no no, let me explain,’ then you are down a rabbit hole. The danger here is the amount of time explaining the word [socialist]. We would be in a much stronger place if we were just saying you are not going to have to choose between a meal and a prescription.”

At his Wednesday press conference, Sanders previewed how he would draw his contrasts with Biden. Many of the hits were familiar: on trade, on the Iraq war, on health care, on a bill that made it tougher to seek bankruptcy relief and on Biden’s past comments on Social Security. His team believes these issues will resonate in the states ahead.

When Sanders got into the race last year, those around him saw the crowded field as an asset.

“He’s got a loyal following, he’s got a high floor, he doesn’t need much more to get to a win number in a crowded field,” a Democratic pollster affiliated with the campaign said in March of 2019, when Sanders had just jumped in.

Those around Sanders knew winning 25% of the field over and over again would rack up delegates across the country, as long as everyone else in the race was doing worse than that. That was how Trump did it (though, it should be noted that the Republicans make it a lot easier to win delegates than Democrats do with their winner-take-all approach to states).

The week before Super Tuesday that strategy was in full force. Sanders had dominated Nevada. South Carolina was never going to be his state to win, but of the 14 states that were voting three days after South Carolina, Sanders appeared to be in good shape. California was feeling the Bern. And in Texas, Virginia, and North Carolina, enough people were feeling of the Bern that Sanders could rise in a fragmented field. It was a massive improvement for Sanders in those states, which overwhelmingly went for Hillary Clinton in 2016, and showed Sanders’ ability to organize Latino and younger voters.

At a rally in Richmond, Virginia, five days before Super Tuesday, Sanders went through his policies. He listed his enemies, from the pharmaceutical industry to the fossil fuel industry. He energized the room of thousands of mostly young, white voters by railing against the Democratic establishment. He added a small, and quickly eclipsed jab at Biden for voting for the Iraq war and trade deals. And he very quickly made the case for his electability: He’s been beating Trump in the vast majority of head-to-head national polls.

On Tuesday, Biden won Virginia in a landslide, consolidating the support of the moderate wing of the party and late-deciding voters looking for someone other than Sanders. That pattern was repeated to lesser extents in several other states.

Sanders’ campaign didn’t have a plan for that, yet.

“They misread the dynamics of this election,” said Mark Longabaugh a Democratic strategist who advised Sanders’ 2016 campaign but parted ways with it going into his 2020 run, citing creative differences. “He in his own mind doesn’t understand that in 2016, we had a binary race. If voters didn’t go for Clinton, they were going to go for Sanders. It’s very obvious that a lot of our vote in 2016 were people who didn’t want Clinton and they weren’t necessarily left-wing ideologues ― part of his revolution.”