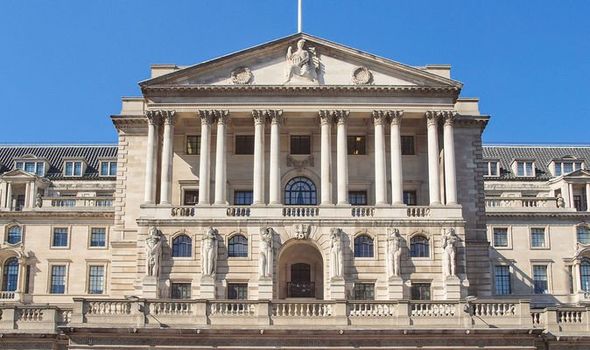 After 12 years of low returns, millions now stand to see their nest eggs shrink even more as the cost of living is predicted to double to four percent. Bank bosses yesterday kept interest rates at a record low of 0.1 percent despite the expected surge.

Andrew Bailey, Bank of England governor, said the jump in inflation was understandable considering the “bumpy” economic recovery from the Covid pandemic. The latest economic forecasts expect inflation not to return to the Bank’s target before the middle of 2023.

This extreme jump in prices will hit households that have savings in cash Isas or bank accounts the hardest.

Britons hold £8,100 in these types of accounts on average, which generate just £37 each year from the typical 0.46 percent interest rate.

Four percent inflation would reduce this amount by £326 over 12 months even with interest payments.

High street bank savings accounts pay as little as 0.01 percent interest, with savings rates near historically low levels. This would earn just £1 a year for every £10,000 saved.

And the Bank’s forecast will also have a devastating impact on pension savings.

Someone with a £100,000 pension who needs an income of £5,000 a year on top of their state pension would run out of money after 37 years if there was zero inflation and the invested cash grew by four percent net of charges.

But they face running out of cash after 20 years if inflation runs at four percent.

Latest economic forecasts from the Band Of England show it expects inflation to pick up to four percent in 2021, against a previous prediction of a peak of 2.5 percent.

This is double the Bank’s target, but it insisted the cost pressures will prove “transitory” and that inflation will return to two percent in the medium term.

But its estimates signal that inflation will remain above the Bank’s two percent target throughout next year before finally returning to target in mid-2023.

Governor Mr Bailey said the rapid recovery in demand for some goods was outstripping supply, contributing to price increases. But he said many of the inflation drivers are “temporary”.

He added: “I want to emphasise that we don’t take this [inflation rise] lightly by any means.

“We at the Bank of England are very focused on inflation.

“But we do expect it to come back to target.”

Adam Walkom, co-founder of financial planner Permanent Wealth Partners, said: “When it comes to interest rates, the Bank of England, like every other central bank around the world, is committed to let the economy run hotter for longer.

“It’s looking to see some inflationary pressures as a sign that the economy is growing quickly.

“With this philosophy, there is no way they will raise rates any time soon.”

Laura Suter,AJ Bell’s head of personal finance, said: “A saver with £1,000 stashed away in an easy access cash account that pays an interest rate of 0.6 percent would make just £6.

“What’s more, UK households currently have £240billion in accounts paying no interest, so at the very least these savers should get the best returns they can.

“Although with such dismal rates on offer it’s understandable why savers can’t get too excited to switch.”

Members of the Bank’s Monetary Policy Committee voted unanimously to hold the base rate down.

The MPC stressed that some “modest tightening” of monetary policy is likely to be needed in due course to cool inflation, signalling that action may be on the way.

The Bank said: “The committee’s central expectation is that current elevated global and domestic cost pressures will prove transitory. “Nonetheless, the economy is projected to experience a more pronounced period of above-target inflation in the near term than expected in the May report.”

The Bank kept its growth forecast at 7.25 percent for 2021, as it said gross domestic product was set to rise by a better-thanexpected five percent in the second quarter.

However, this is expected to slow to around three percent ‑ weaker than first forecast ‑ in the third quarter.

The 2021 prediction would still mark the fastest growth since the Second World War.

The Bank’s downgrade to third quarter growth forecasts comes as the Delta Covid-19 variant has affected spending following a surge in pent-up demand between April and June as restrictions eased.