WASHINGTON ― The threat of a coronavirus pandemic has not slowed down President Donald Trump’s habit of lying to and misleading Americans on any number of topics ― including that same coronavirus threat.

At a time when many Americans are turning toward the White House for accurate information about the virus, Trump has responded to the new responsibility in a familiar manner: praising himself, promising easy success and, when needed, blaming others.

And mixed into it all are his now familiar lies on a range of issues, including who is paying tariffs he has imposed on Chinese imports, the significance of the updated trade agreement with Canada and Mexico, the status of his wall along the southern border, and which president approved the Veterans Choice Act ― making even his accurate statements about the virus seem suspect.

“When you’ve lost your credibility, you also lose the benefit of the doubt,” said David Jolly, a former Republican congressman. “Half the nation simply doesn’t believe the president. The other may only be convinced he’s lying if they suffer personal disruption or financial losses.”

“Tune out the president and listen to the public health experts,” Price said. “Even President Obama, who certainly didn’t have the credibility deficit Trump does, reiterated a single message during the Ebola outbreak: expertise and science will guide the response.”

The White House would not respond to HuffPost queries about Trump’s handling of the outbreak. 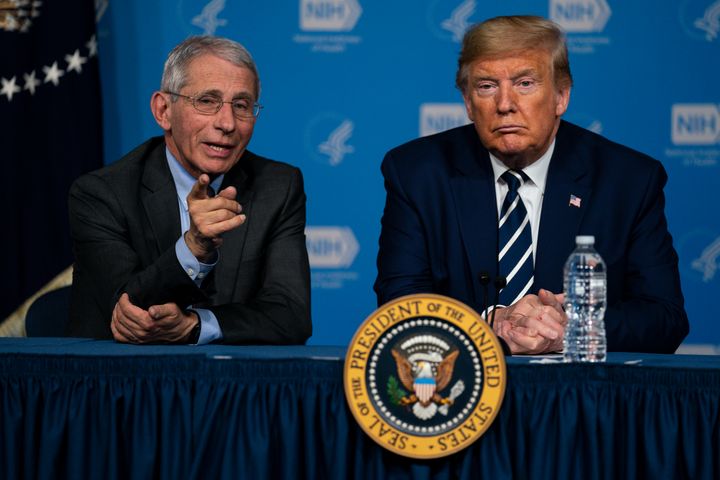 But from the outset of the crisis, Trump has largely claimed that he personally has done a great job managing it, that the disease is not that dangerous compared to the annual flu, and that Democrats and the news media are conspiring to scare people, thereby tanking the economy and his reelection chances.

Last week, at a campaign rally in South Carolina, Trump went as far as to portray their descriptions of the coronavirus as a “hoax,” similar to special counsel Robert Mueller’s investigation into his campaign and the House’s proceedings leading to his impeachment for trying to cheat in the coming election.

“This is their new hoax,” he said, and then again compared the relatively small number of Americans who are being treated for the disease with the number who die of the flu each year. “Think of it, you hear 35,000 and 40,000 people, and we have lost nobody, and you wonder the press is in hysteria mode.” (Since that time, 11 Americans have died from COVID-19, the disease caused by the virus.)

At the same time, Trump has repeatedly ― and inaccurately ― suggested that at his direction, a vaccine is right around the corner. “We’re rapidly developing a vaccine,” he said during his first news conference on the topic last week.

That claim appears to have infected his political appointees in their own statements. Health and Human Services Secretary Alex Azar, for example, told reporters at the White House on Tuesday that a possible vaccine had just been greenlighted for clinical trials, causing Trump to burst in: “Which is a record.”

It was left to Anthony Fauci, the longtime head of the infectious diseases program at the National Institutes of Health, to point out that that was only the start of a long road of tests. “The whole process is going to take a year, a year and a half at least,” he said.

The head of the coronavirus task force, Vice President Mike Pence, meanwhile has made it a point to praise Trump at every public setting ― “From the moment that this country learned of the spread of the coronavirus, President Donald Trump took decisive action,” Pence said Saturday ― a nod that others in the group then emulated, as well.

And on Wednesday, Trump even blamed Obama for a delay in having coronavirus testing kits readily available, even though it was under his watch that the Centers for Disease Control and Prevention botched the process of creating one and then refused to accept one invented in Germany.

“This will go down in history as a prime example of kakistocracy and corruption. Key agencies like CDC captured by a president only interested in the impact of a health crisis on the stock market and his own numbers,” said Norman Ornstein, a scholar at the conservative-leaning American Enterprise Institute. “A president without credibility at a time when it is most needed. Disgraceful and reckless beyond measure.”

Trump has recommend deep cuts in the CDC’s and NIH’s budgets since taking office, although Congress, both under sole GOP control and under divided control for the past year, has refused to go along with them. However, Trump did dismantle a pandemic response team Obama had created following the 2014 Ebola outbreak in Africa.

Trump and other Republicans had railed against Obama for his handling of that epidemic, but he in the end won praise for both preventing its spread to the United States as well as helping its victims in West Africa.

“Even conservatives can agree that within a limited government, managing a health crisis is a federal responsibility,” said Rick Tyler, a top aide to Texas Sen. Ted Cruz’s 2016 run for the Republican presidential nomination. “Requisite to an effective response to this pandemic is trusting the information coming from the president. But Trump has squandered that trust. Still, Americans can still protect themselves and their families by educating themselves about COVID-19 from the CDC, NIH and other credible sources.”