Gig economy startup Airtasker is betting that its US expansion plans can succeed with the acquisition of a startup that failed celebrity backers like Ashton Kutcher, his then wife Demi Moore and tech luminaries such as former eBay boss Meg Whitman.

Airtasker is acquiring Zaarly as part of its expansion plans announced on Friday along with a $21 million capital raising to fund its international aspirations.

Zaarly was a celebrity darling in 2011 when it attracted $US15 million worth of funding and celebrity backers that also included Star Trek: The Next Generation star LeVar Burton. Its business plan echoed Airtasker’s gig economy strategy of acting as a marketplace for outsourcing tasks.

“It was a no-brainer for those guys to get involved because they loved the team and they loved the idea,” Zaarly founder Bo Fishman said in 2011 of Kutcher and Borton’s close involvement. 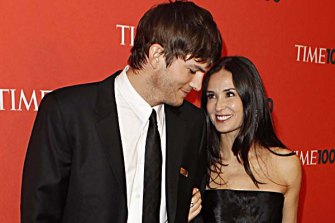 Ashton Kutcher and Demi Moore were among the early backers of Airtasker’s US acquisition Zaarly. Credit:Reuters

It was described at the time as a Craigslist meets eBay, but the company folded last month with a business model that had retreated to a niche focused on home services in a few US cities such as Kansas City and Dallas.

“I’m more confident than ever that there is an opportunity to build a truly meaningful company in this part of the economy — we’ll just have to wait a bit longer to find out what it looks like,” Mr Fishback said last month after announcing the business would close.

Airtasker chief executive Tim Fung said Mr Fishback will be retained for a refocus of the business on its original Airtasker-style strategy and used as the foundation for the ASX-listed company’s entry into the US market.

“I’ve known about Bo Fishback for a decade, he was someone I admired and looked up to,” Mr Fung said.

“Especially those early days of Zaarly where he raised more than $US15 million, he had Ashton Kutcher as an investor, he had [US venture capital firm] Kleiner Perkins.”

According to Mr Fung, he and Mr Fishback have a lot in common as they both had an original vision to build an open and horizontal marketplace.

“When we met with them, we saw that there was this huge opportunity to just reduce the friction and open up the marketplace … to really accelerate our expansion into the US markets,” he said.

Airtasker will acquire the remains of the Zaarly business for $3.4 million. The remainder of the $20.7 million capital raising, at $1 a share, will be used to fund its US and UK expansion plans as both economies emerge from the pandemic.

Mr Fung said Airtasker has been watching the marketplace activity in both countries in recent weeks and noticed a pickup in activity that the company aims to take advantage of.

“The UK and US markets are really starting to capture some tailwinds coming out of the COVID restrictions, but also some organic growth,” he said.

Airtasker raised $84 million ahead of its March IPO, but most of the funds went to investors – like Kerry Stokes’ Seven West Media – which sold its shares ahead of the float.