Afterpay has settled with Californian regulators over allegations that it was offering illegal loans in the state.

The buy now pay later juggernaut said it has finalised an agreement with the California Department of Business Oversight (DBO) which requires to to offer its service under a finance lender's licence and pay costs of $1.5 million which was included in its December half year. 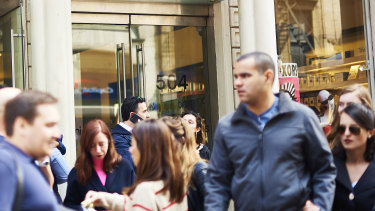 In the US, two out of three people aged 18 to 30 actually don’t own a credit card anymore and are a prime market for Afterpay.Credit:Bloomberg

"The refunds represent all the fees Afterpay has collected from more than 640,000 Californians in so-called buy now, pay later transactions that the DBO concluded were illegal loans," said the DBO in a statement on its web site.

"After an inquiry launched last year, the DBO concluded Afterpay had engaged in the business of a finance lender without obtaining a required license," the department said.

"Afterpay rejects the view that the company operated illegally. While Afterpay does not believe such an arrangement required a licence from the DBO, Afterpay has agreed to conduct its operations under the DBO licence as part of this settlement," the company said.

The settlement is an important one for the company which was valued as high as $12 billion last month on the basis of its strong growth potential in the US.

It is not the only buy now pay later provider targeted by the DBO. ASX-listed Minneapolis group Sezzle was also accused of illegally lending in the state and had its initial licence application rejected.

In January, Sezzle reached a $US300,000 settlement with the DBO covering refunds and penalties.

"In both cases, the DBO concluded purported credit sales made by the lenders’ merchant partners were not bona fide but, rather, were structured to evade otherwise applicable consumer protections," the DBO said.