Virgin Australia has been accused of standing down about 170 ground crew due to a lack of available work, despite them doing months of overtime and the airline trying to hire more people into that role. 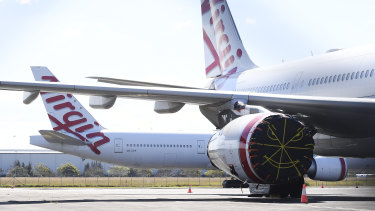 Virgin says most of the stood down crew are working close to their normal hours.Credit:Albert Perez

The airline wrote to pit crew employees – who load and unload aircraft, and drive tugs and aircraft stairs – last Wednesday telling them they would be stood down from March 29 to April 18 and were “not required to work your usual hours”.

“The stand down direction is because of a limitation on the availability of work caused by the COVID-19 pandemic which means that you cannot be employed for your normal days/hours of work,” the letter to workers said.

But the TWU says in a filing to the workplace tribunal that the stand down notice came despite pit crew employees working hours “akin to (and in most cases over and above) their normal working arrangements” for the past two to three months.

TWU officials had told Virgin management in a meeting on Monday it was “absurd” for the airline to stand down pit crew workers while the company was at the same time looking to hire more people into those teams because it had let too many go in a recent redundancy round.

The TWU said Virgin could not legally stand down the employees given there was no shortage of work for them, and that the company also failed to consult with workers as required under their enterprise agreement.

Virgin appeared to be standing down workers to “avoid its obligations to pay its pit crew employees shift penalty rates, overtime rates and/or public holiday rates which it would normally be required,” the filing says.

Virgin disputed the TWU’s claim that all pit crew workers – around 800 people – had been stood down, and that the latest stand down was limited to 170. Of those workers, most were working close to their normal hours. The airline did not dispute the TWU’s claim about pit crew working hours.

“We are working hard to ramp up our flying to enable more hours and roster flexibility across our operational workforce,” a Virgin spokeswoman said.

“Prior to the tightened border restrictions put in place by some states earlier this week, it has been our intention to have all of our ground staff return to work in their pre-COVID capacity.”

The move comes after the JobKeeper wage subsidy which would have been paid to stood-down workers ended on Sunday. Virgin said there were fewer people stood down now than there were last week.