NEW YORK — Over 100 employees of the New York Police Department have tested positive for the coronavirus and nearly 7% of cops have called out sick, the department announced Monday.

In a press statement, the NYPD said that 100 uniformed cops and 29 “civilians” have tested positive for the virus. That’s about double the number of positive tests from three days earlier.

The department also said that over 2,400 cops, or about 7% of the entire force, called out sick Monday, double the daily average.

“The increase in the number of employees on sick report was anticipated and given the nature of the virus, it is expected that this number will grow,” the NYPD said in its statement. “So far these absences have had a minimal impact on our ability to keep the people of New York City safe and respond to those requiring assistance.”

In an internal memo sent to the entire force earlier this month, NYPD Commissioner Dermot Shea warned officers that, due to interaction with the public, officers would “without a doubt, suffer” during the coronavirus pandemic and that “many members may become ill.”

The spread of the virus among the nation’s largest police force underscores the crisis in New York City, which has emerged as an epicenter of this historic pandemic. The city is on lockdown, with schools and all nonessential businesses closed.

The virus has infected at least 13,000 people in the city, killing 125. Over 2,200 people have been hospitalized with the virus, city officials said Monday. Of those, over 500 are in intensive care.

The city’s hospitals are expected to be overrun with patients in the coming weeks. Doctors and nurses there are in desperate need of crucial medical supplies, including masks and ventilators. 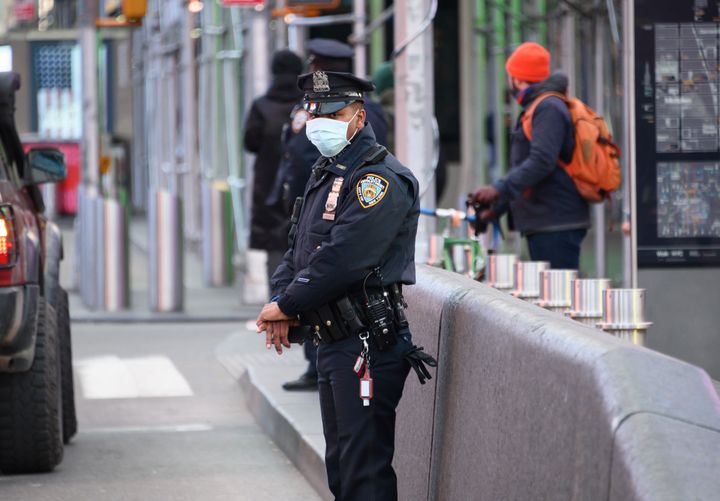 Both Mayor Bill de Blasio and Gov. Andrew Cuomo have criticized President Donald Trump’s slow and inadequate response to the crisis. Both have asked the president to invoke the Defense Production Act, which would ramp up production of medical supplies.

“The president of the United States is from New York City and he will not lift a finger to help his hometown,” de Blasio said on NBC’s “Meet the Press” on Sunday. “I can’t be blunt enough: If the president doesn’t act, people will die who could have lived otherwise.”

Millions could become infected in the city, officials say, and thousands could die.

In the meantime, the NYPD says it has started “a new series of patrols to monitor locations and educate members of the public on safe social distancing.”

Officers, the department says, “are stopping by restaurants, bars, supermarkets, salons and public spaces to remind individuals gathered of the ban on congregating in public spaces and to practice social distancing.”

Local police reform and social justice advocates have called on the NYPD to suspend low-level arrests — which disproportionately target black and brown New Yorkers — during the pandemic.

Incarcerating people, the activists argue, will only serve to spread the virus. So far, 17 Department of Correction employees and 21 inmates have tested positive for the virus.

But at a press conference Friday, Shea said there would be no such slowdown in arrests.

“We have no intention of strategically cutting enforcement specifically related to this coronavirus,” he said.