ANZ chief executive Shayne Elliott says the majority of Australian businesses are hopelessly unprepared for cyberattacks, a mounting threat as the digitisation of society gains pace and criminals exploit vulnerabilities during COVID-19. 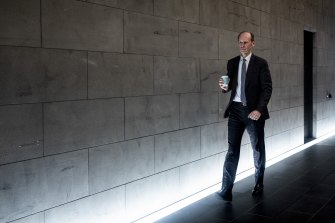 “Australian businesses are nowhere near well enough prepared for this. I would describe the position as woeful actually,” Mr Elliott said.

Mr Elliott, speaking at a Trans-Tasman Business Circle event on Tuesday, said scams had increased by about 75 per cent last year as Australians work and interact digitally during lockdowns to stop the spread of COVID-19.

“Therefore we’re more and more susceptible than we’ve been before. Sadly, criminals have taken an opportunity there. People are under stress and more likely to click on things they shouldn’t,” Mr Elliott said.

“The good news is the general level of preparedness around cyber at the big end of town – banks, big infrastructure – is pretty good. The risk is really in the small, mid-sized corporate area. I don’t think many companies pay enough attention to this.”

However, Mr Elliott said protecting affected businesses from cyberattacks was “not rocket science” and the most important defence mechanism was staff training. “Our number one protection, our number one firewall is people. It’s people using common sense,” he said. “Does that transaction look real? Does that request for data seem legitimate?”

The comments come as the Australian Banking Association (ABA) this week launched a month-long campaign to raise awareness about cyber scams after releasing a survey that found 69 per cent of Australians deal with weekly scam attempts and one-in-three know someone who has lost money to a scam.

ABA chief executive Anna Bligh said scammers and cyberattackers are the “bank robbers of the 21st century” and called on the federal government to foster greater collaboration with the private sector by relaxing privacy laws to allow information sharing “in real time”.

“If you want to stay one step ahead of these very sophisticated, global, criminal organisations, we have to be as joined up as we can between private sector and public sector agencies to protect the country as well as we can,” Ms Bligh said. “I do think there’s more that could be done.”

Australian banks will spend about $19 billion this year on IT systems to prevent scams, according to the ABA. Ms Bligh said cybersecurity investment was a “growing and significant cost” for the banking sector. “But it’s like employing security guards on the cash trucks. You just cannot.”

Meanwhile, Westpac’s chief executive Peter King said upgrading technology was a key part of the bank’s strategy to strengthen financial crime controls after being fined a record $1.3 billion last year for allowing paedophiles to use its banking services. “The end goal is to embed financial crime risk management into everything we do,” Mr King said.

Mr King said the bank still relied on “manual controls at the moment” but would invest further in technology to eventually allow bank staff to have an “end-to-end” view of a customer’s account. “How do we use technology now that we have our processes improved? That’s what we’re into. It’ll be part of our cost base that we get that technology but also know there are emerging risks so you’re going to have to continue refresh the platforms.”