I recently had the opportunity to sit down, for the first time ever, with a financial planner. We discussed, among other things, my plans for retirement.

"I’d like to sit in the sun and read a lot of books," I spitballed to the kind-faced young man who, despite some additional prodding, was unable to extract from me any grander ambitions, such as owning a yacht or cruising the Rhine River. 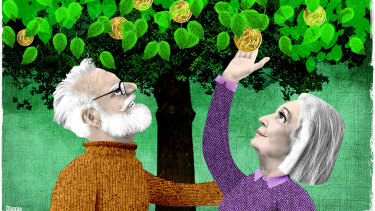 "Ideally," I went on, "I’ll cash out my super at age 60 and use it to pay off my mega home loan and then live off the full age pension."

It’s a plan I’ve revealed previously on these pages, to the apparent amusement of several readers who have written advising I will desire a more opulent lifestyle in retirement.

And you may be right.

But then, you must remember I am of a generation who've been told our entire working lives that we must save to fund our own retirement. Ain't no such thing as a free education, nor retirement.

Meanwhile, a roughly $3 trillion – by assets held – behemoth super industry has been insisting that to achieve a "comfortable" retirement, I must save around $1 million in super, which, dear reader, I have not done – nor may ever.

It’s a fear campaign that has taken hold, leading many Millennials to despair as to their retirement prospects – that is, if they have any time left after despairing about their home-ownership prospects.

So, it can be a pleasant thing for us to remember that the age pension does exist, and can, along with super savings, be expected to provide the backbone of retirement income for many future generations of Aussies. Because for all the fear-mongering, Australians’ retirement prospects are, for the most part, bright.

Maybe even a little too bright, according to a recent study which found the typical aged pensioner today is dying with about 90 per cent of the assets they took with them into retirement unspent, passing on large bequests to their lucky children.

Indeed, according to government data, about 40 per cent of retirees today are "net savers", meaning they continue to accumulate more wealth in retirement than they spend. One obvious conclusion to be drawn from this startling fact is that many retirees should be living it up a bit more.

Looking forward, it means a heck of a lot of money is streaming into our super system which may not be needed and it’s time to seriously question the trade-offs.

The push to grow Aussie super nest eggs was born from a worthy desire, not to replace the age pension but to bolster it and provide a more comfortable retirement.

In 1992, the Keating government introduced the super guarantee – whereby employers were forced to put some portion of a worker’s salary into a super account for them, starting at a rate of 3 per cent and increasing over time to 9 per cent. Super has since become a shibboleth of the Labor Party, which in 2012 introduced legislation to incrementally increase the guarantee further to 12 per cent by 2025. The next increase is scheduled for mid next year.

Many people like to imagine this is free money: a gift from employers, rather than a deduction from workers' wages. But recent research by the Grattan Institute, which conducted a detailed study of enterprise agreements, has settled the matter, revealing that higher compulsory super contributions do indeed come at the expense of higher wages, rather than profits.

Grattan would now like to see any further increases in the guarantee canned. Separate analysis by the institute shows the typical home-owning Australian worker can already expect to retire with an income stream worth 90 per cent of their pre-retirement income.

Indeed, the bottom 30 to 40 per cent of workers can expect a pay rise in retirement, thanks partly to the generosity of the aged pension relative to working-age support payments.

In their submission to the government’s current review of retirement incomes, Grattan authors Brendan Coates and Jonathan Nolan were keen to stress the trade-offs inherent in retirement incomes policy. Namely, forcing younger workers to put aside higher savings for retirement comes at a direct cost to their immediate living standards.

"Higher compulsory super means working people will have less money to buy a home, invest in their children’s education, or start a business," they observe.

At a time when wages growth has stalled and the hurdle to home ownership – an important pillar of a comfortable retirement – has never been higher, such trade-offs are increasingly significant.

"Given the reality that most Australians will have enough money in retirement, there is no need to boost retirement incomes across the board," Coates and Nolan conclude.

Instead of increasing the guarantee, the government could save money – about $2 billion a year because super money is taxed at a concessional rate – and target the funds at those who are set to suffer the most in retirement: namely, renting households for whom Commonwealth rent assistance has not kept pace with rising rents.

Almost three decades on, it’s clear our super system’s founding fathers failed to foresee a world in which many Australians would enter retirement without the security of owning a home.

Forcing young Australians to further gold-plate their super nest eggs – at the expense of saving faster for a deposit or paying down their mortgage – is no solution to that problem.