Now, online video platform Vimeo is preparing to be the next big spinoff. IAC (IAC) shareholders are expected to formally approve the split this Friday, paving the way for Vimeo to trade on its own on May 25 under the ticker symbol VMEO.
The maker of video software and editing tools for more than 1.6 million subscribers just reported a profitable quarter with revenue of nearly $300 million, a 57% surge from a year ago.

The company has also raised $450 million in funding from outside sources, including a November capital infusion from Thrive Capital and Singapore’s sovereign wealth fund GIC. T. Rowe Price invested in January. Those deals value Vimeo at around $6 billion.

Spinning off from IAC has worked out well so far for Match (MTCH). Shares are up nearly 35% since the company was fully separated in July 2020. So will Vimeo be able to follow in Match’s footsteps?

CNN Business caught up with Vimeo CEO Anjali Sud last week ahead of the upcoming spinoff.

Pandemic made video even more crucial for businesses

Sud prophetically told us two years ago that, given its track record, IAC would eventually spin Vimeo off as a standalone business, but she admitted to being surprised that the platform could go public this soon. 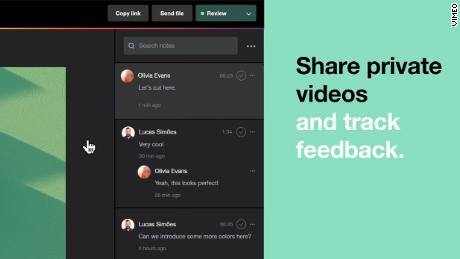 Covid-19 changed the equation for Vimeo, much like many other businesses.
“This is happening earlier than I would have thought because the pandemic has exposed the business world to the need for professional quality video,” Sud said. “Suddenly overnight, video went from a nice to have to a need to have for companies.”
Vimeo already has an impressive list of big corporate customers, including Amazon, Comcast, Rite Aid, Sottbank, Spotify and Starbucks.
“If you’re a Fortune 500 company, you are never going to not have a livestream town hall for employees around the world anymore,” Sud said. “It sounds so obvious now but it’s amazing how many organizations are not set up that way and are now going through a digital transformation.”
Video became increasingly important as a means of communication for companies both big and small during the pandemic, Sud said — especially for corporate human resources departments.
“We hope to put tools that were once only for Hollywood studio producers in the hands of every organization,” she said.

Hoping to keep the entrepreneurial spirit

Vimeo has been able to thrive and grow under IAC, acting like a startup that just happened to be owned by a major media conglomerate. And now that Vimeo is getting ready to trade on its own, Sud said she hopes that not much will change.
“I’ve never been more excited. But we want to stay scrappy as a public company,” she said. “We need to be nimble and not get bogged down by bureaucracy.”
Sud, who joined Vimeo in 2014 as a director of marketing after stints at Amazon (AMZN) and Time Warner, the predecessor to what is now AT&T’s (T) WarnerMedia, the owner of CNN, was promoted to CEO in 2017.

She said that she’s proud to be part of the small — but growing — group of female CEOs in Corporate America, adding that as a mother of a two-and-a-half-year-old son, she feels she has more empathy for working moms.
“Whenever I read stories about women stepping up in leadership roles, that is good to see,” Sud said. “You want different types of leaders.”
Source: Read Full Article