China is rushing towards the development and distribution of a central bank digital currency while the rest of the developed world dithers along at a leisurely and cautious pace.

From comments made by the head of the People’s Bank of China research bureau, Wang Xin, at a briefing late last week it would appear the pace of China’s experimentation with a digital currency, via the Digital Currency Electronic Payment (DC/EP), is accelerating.

It has already distributed – given away – about 200 million yuan ($40 million) in pilot projects in its major cities. 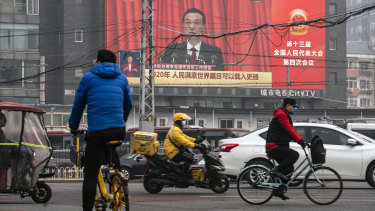 China is rolling out its digital currency.Credit:Bloomberg

Wang confirmed the PBOC and the Hong Kong Monetary Authority have begun testing the currency for cross-border use and there is now more intense collaboration with Thailand and the United Arab Emirates on the use of digital currencies for cross-border payments.

Last month the PBOC established a joint venture with the Belgium-based SWIFT messaging service to explore the infrastructure needed to support a digital yuan, indicating it wants to expand the use of an e-yuan beyond domestic retail payments. SWIFT is used by most of the world’s banks and other financial institutions to effectively execute and verify financial transactions.

The expansion of China’s focus from the potential domestic distribution of a digital yuan to its cross-border application is a signal of China’s ambitions.

There are some obvious motivations for China’s interest in becoming the first major economy to introduce a digital currency.

China already has more than 800 million of its citizens using payments apps and with more than 200 million people in China without a bank account, there’s an obvious large market of early adopters for a digital currency. It would enable the authorities to displace the e-payment giants such as Ant Group and Tencent that dominate cashless payments but who appear to have fallen out of favour with the authorities.

In the process it would defuse the risks associated with having two private non-bank institutions having such a large and concentrated position within China’s financial system.

The structure China envisages for a digital currency would see the PBOC issue yuan directly into the “e-wallets” of customers of state-owned banks, effectively cutting out the e-payments middlemen while preserving an intermediary role for its banks.

(One of the reasons other central banks have been more cautious about the introduction of digital currencies is a concern that it would disintermediate their financial systems and destabilise their banks if users could maintain their savings with a central bank rather than hold their deposits in the banking system).

The PBOC and the Politburo, whose monetary policies tend to be exercised by increasing or decreasing the supply of credit to quite specific sectors of the economy rather than through interest rate movements, would have more and more granular control over China’s financial system with a central bank-issued digital currency.

Moreover, and this might be the greatest motivation for a highly authoritarian state that already practices quite intrusive surveillance of its citizens, the PBOC would be able to track every single transaction in real-time.

That would enable it to prevent money laundering, identify corruption, control capital outflows and monitor the finances of anyone suspected of activities deemed inimical to the state.

The interest in the extra-territorial applications of a digital yuan is also transparent.

The Trump administration weaponised the US dollar by imposing a raft of financial sanctions on Chinese individuals and institutions, using the dollar’s dominance of international financial activity to effectively cut off those targeted from the global financial system.

The issues that led to sanctions range from China’s crackdown on Hong Kong to its alleged human rights abuses against the Uighurs in Xinjiang province to companies linked to China’s military.

With the dollar used in nearly 90 per cent of the world’s foreign exchange transactions, the sanctions have real bite – Hong Kong’s chief executive, Carrie Lam, has said she is now paid her salary in cash and has “piles of cash” in her home because she no longer has a bank account after being sanctioned.

Even Chinese banks with international operations won’t deal with those sanctioned for fear of being frozen out of the global financial system. 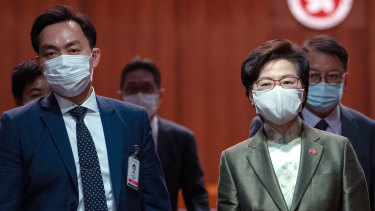 Hong Kong chief executive Carrie Lam says she is paid her salary in cash and doesn’t have a bank account after being sanctioned.Credit:Bloomberg

China has made no secret of its ambition of internationalising the yuan and increasing its use in cross-border transactions from its modest 2 per cent or so share of international payments and foreign exchange reserves today.

The collaborations with Thailand (which is also quite advanced in its planning for a digital currency) and the UAE and the testing in Hong Kong are clearly preparation for an eventual international launch of the digital yuan (Wang said that will occur “when conditions are ripe and market demand calls”).

China’s “Belt and Road” initiative could provide it leverage to expand distribution of a digital currency, at least within its sphere of influence.

In the near term, a digital yuan wouldn’t appear to be a threat to US dollar hegemony but America’s declining share of world trade – at about 10 per cent it is completely out of whack with the dominance of the dollar – and the potential for major central banks outside the US to issue their own digital currencies creates the prospect of a more fragmented future where the dollar is less dominant.

A limiting factor for China’s international ambitions is, unlike cash, the lack of anonymity inherent in a central bank-issued digital currency and, more particularly, one issued by an authoritarian state with global ambitions. Western companies and individuals aren’t going to want to have China track their transactions.

That obstacle to acceptance is why much of the discussion among central bankers elsewhere has been on dual payments systems – central bank-issued digital currency circulating alongside conventional payment mechanisms.

The pace at which China is developing the digital yuan is having an impact elsewhere. Most central banks have been exploring the implications of introducing their own digital currencies.

Until recently the motivation has been provided by the popularity and increasing acceptance of Bitcoin and the imminent launch of the Facebook-sponsored Diem (formerly Libra).

China’s progress, the context of the competitive and combative relationship between China and the US and increasingly distrustful relationship with the rest of the West is, however, sharpening the focus.

The US might be hastening slowly when it comes to a central bank-issued digital currency – Federal Reserve Board chairman Jerome Powell has said the US doesn’t need to rush the project – but it is unlikely that it will ignore the threat to dollar dominance or the weakening of the power of its financial sanctions that the digital yuan might pose.