Banks have frozen repayments on 14,500 home loans as a result of the latest round of lockdowns, highlighting the growing financial toll being inflicted by restrictions in NSW especially.

The Australian Banking Association (ABA) will on Friday release figures showing the number of home loans put on hold in response to Sydney’s escalating COVID-19 outbreak is much lower than the peak of last year’s crisis, but rising quickly as the lockdown drags on. 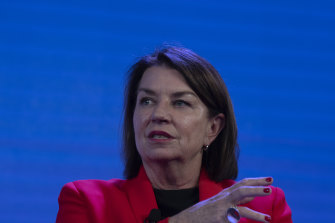 Australian Banking Association chief executive Anna Bligh: “What the data tells us is that prolonged lockdowns result in financial difficulties for literally thousands of people.”Credit:Louise Kennerley

The ABA’s data showed that in addition to the 14,500 mortgage deferrals granted since the 8th of July, payments on more than 600 business loans had also been deferred.

NSW accounted for more than 10,000 of the mortgage deferrals, and the number of struggling borrowers is likely to continue rising as the Greater Sydney lockdown continues.

ABA chief executive Anna Bligh said banks would also be closely monitoring the impact of the lockdown in Queensland, and the expansion of the Greater Sydney lockdown into the Hunter and Upper Hunter regions on Thursday.

“What the data tells us is that prolonged lockdowns result in financial difficulties for literally thousands of people,” Ms Bligh said.

Ms Bligh said borrowers could generally manage through lockdowns of two or three weeks. But when shutdowns were extended over a longer period of time, more people struggled, as they lacked sufficient buffers, such as savings.

Sydney borrowers dependent on construction activity had been especially hard hit, Ms Bligh said, noting that construction work had not been shut down in 2020.

The data underlines the damage being inflicted by the forced closure of swathes of the economy, but the number of loans being deferred is still much lower than at the peak of last year’s crisis, when almost half a million home loans were deferred.

“It’s a vastly different circumstance to last year, when the whole country was locked down,” Ms Bligh said.

In a further sign of the hit from the NSW lockdown, Bureau of Statistics (ABA) figures on Thursday showed payroll jobs in NSW fell 4.4 per cent in the fortnight to July 17. According to CommSec, jobs held by women and people aged between 15 and 19 had fallen the most.

The ABA said the number of customers needing hardship support had grown by 73 per cent this week, compared with 153 per cent growth the week before.