At a time of mass unemployment, mounting bankruptcies and a historic collapse in GDP, these mega companies are powering a V-shaped recovery on Wall Street.
Facebook (FB), Netflix and Amazon (AMZN) have all hit record highs in recent days. Apple and Google owner Alphabet (GOOGL) aren’t far behind.

The NYSE FANG+ index, also home to the likes of Tesla (TSLA), Twitter, Nvidia (NVDA) and Alibaba, is blowing away the rest of the stock market and flirting with record highs of its own. The FANG+ index has surged 24% this year, compared with the 7% decline facing the S&P 500. Small-cap stocks, measured by the Russell 2000, have tumbled 15%. 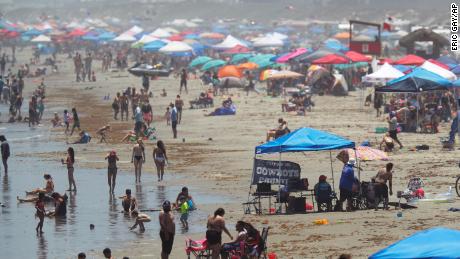 The rush to buy FAANG, the dominant force of the last bull market, doesn’t just reflect confidence that they have the resources to ride out the storm. It’s a broader bet that the pandemic has only increased society’s reliance on technology.

“Tech companies are thriving,” said Seema Shah, chief strategist at Principal Global Investors. “No physical contact and lockdowns mean that this is a crisis that almost works in technology’s favor.”

Amazon, perhaps the ultimate coronavirus-proof company, is Exhibit A. Stay-at-home orders have only accelerated the shift away from malls and shopping centers. Online shopping has been a rare bright spot in a largely dreadful retail sales environment.
And with millions of employees working at home, businesses are relying on the cloud-computing platforms powered by Amazon and other tech companies including Microsoft (MSFT), which is also getting close to a record high.
Likewise, Netflix (NFLX) experienced a surge of viewership as Americans, stuck at home and with no live sports to watch, binge-watched series including “Tiger King,” “Love is Blind” and “Ozark.”
Apple (AAPL) has been dinged by the pandemic, which scrambled its supply chains in Asia and is sapping demand for pricey iPhones and other gadgets. But Apple’s revenue still inched up 1% during the first quarter.
Alphabet and Facebook are hurting from a sharp drop in advertising, though perhaps not by as much as some had feared. Alphabet’s ad sales still grew during the first quarter, just not by as much as in the past.

Yet these stocks have all bounced back because, especially during these uncertain times, investors are craving growth and strong track records.
“There is much more confidence and visibility in the tech sector. Investors are willing to pay a premium for that,” said Keith Lerner, chief market strategist at Truist/SunTrust Advisory.
Earnings estimates for the tech sector have dipped only 3% over the past month, according to Lerner. The communication services sector, home to Facebook and Alphabet, is down 14%. Both are much better than the 21% drop in earnings estimates for the S&P 500 overall.
Moreover, Big Tech has the financial flexibility to get through the crisis. Not only have many of these companies built up mountains of cash, but they can easily tap the capital markets to get plenty more, if needed.
Contrast that with the recent bankruptcies of Hertz (HTZ), J.Crew, Neiman Marcus and projections for dozens of oil companies to go under.

The rapid resurgence of Big Tech has played an outsized role in the recovery of the overall stock market because of the dominant role these companies have in the S&P 500.
The five biggest stocks — Apple, Amazon, Microsoft, Alphabet and Facebook — make up 21% of the entire S&P 500’s market value, according to Goldman Sachs, which said this is the highest market concentration in recent memory.
That means those five companies’ sector weighting is roughly equal to the combination of three of the stock market’s weakest sectors: financials (10%), industrials (8%) and energy (3%).
“When you look under the surface, the market is not as strong as the headlines suggest. That’s because of the strength of tech,” said Principal’s Shah. “The truth is, there are major economic risks underlying this.”
This phenomenon is working in Wall Street’s favor by helping to carry the broad market indexes sharply higher, even if some of the underlying pieces remain weak.
And the rising stock market could even help the real economy if it translates to stronger consumer and business confidence that leads to a rebound in spending.
But there are limits to how long Big Tech can carry the rest of the market on its shoulders.
“The divergence between winners and losers is extreme. At some point, that rubber band will stretch too much,” said SunTrust’s Lerner.

Wall Street’s reliance on Big Tech could backfire if the industry suddenly falls out of favor in the event of poor earnings or an antitrust crackdown by Washington, for example.
“We almost need every single large tech company to continue to do well,” said Shah. “That is a huge vulnerability for the market.”
Source: Read Full Article