National Australia Bank chief executive Ross McEwan has confirmed the bank is examining millions of customer accounts as part of an internal project to plug holes in its anti-money laundering regime, under questioning during a heated parliamentary exchange.

The Age and Sydney Morning Herald first revealed in June that NAB had launched a secret internal project dubbed Project Apollo to work through a backlog of customer accounts that had insufficient identification records. 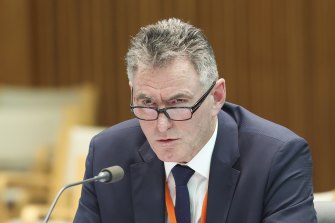 NAB chief Ross McEwan has admitted the bank is trawling through millions of customer records to plug holes in its anti-money laundering regime. Credit:Alex Ellinghausen

Consulting firm Accenture was hired to assist with the mammoth project, which involved trawling through hundreds of thousands of customer profiles, after duplicate accounts or out-of-date identification documents exposed the bank to criminal infiltration.

During a parliamentary economics committee on Thursday, Liberal MP Julian Simmonds quoted this masthead’s reporting that NAB had not updated the occupation of student bank accounts for 20 years, adding “scenarios like that are ripe for organised crime to take advantage of them”.

“Can I put it to you that your best is not good enough and if anything you are the bank of choice for these organised criminals?” Mr Simmonds said.

Mr McEwan said he was restricted in what he could say due to an ongoing investigation by the Australian Transaction Reports and Analysis Centre, but later confirmed Project Apollo’s existence and said the bank was taking the remediation program “very seriously”.

“The backlog relates to a number of years going back that we are going back and looking at all our customers and making sure we have the data we require to fulfil our obligations and know our customers well,” Mr McEwan said.

“When you go back through 9 million customer groupings, that is a huge number. We’ve gone through on a priority level to understand what data are we missing that we should have for customers?

“It is a case of doing it well, trying to do it once, closing the gap at the front so when you bring new customers in you’re not repeating the same issues.”

Mr Simmonds criticised NAB for treating anti-money laundering compliance as a “data project” and said no one would “feel sorry” for the bank “with the profits you make” in calling for further details to be provided regarding the project.

“If you don’t know your customers, you can’t flag them as a risk, you’re missing suspicious transactions facilitating child abuse and other criminal activity,” he said.

Mr McEwan interjected, claiming NAB was taking the project very seriously and that a number of senior employees were tasked with managing it. “We have a program of work called Apollo,” he said. “I just want to record, we are absolutely taking this seriously. We know our obligations. And we are endeavouring to fulfil them.

“We have to make sure that every customer is known, every transaction is known through every product through every jurisdiction. We are working incredibly hard to get some of the data sources of customer information back up to date. That’s the backlog.”

This masthead has also previously revealed the major banks, including the Commonwealth Bank and NAB, are reliant on labour hire firms to fill permanent positions with temporary contractors across its financial crime department. Mr McEwan acknowledged there was a war for talent as AML compliance becomes more important.

“This is however an area that Australia and globally are finding difficulty getting qualified people,” he said. “Digital jobs, data jobs, technology jobs, are difficult.”