Luxury reseller The RealReal doesn’t see Amazon as a threat

The RealReal CEO Julie Wainwright says the demand for luxury items has never faltered despite the coronavirus outbreak.

French luxury brand group LVMH said on Wednesday it no longer plans to acquire iconic U.S.-based jeweler Tiffany & Co. in what was expected to be a $16.2 billion deal.

LVMH said its board decided to no longer pursue the acquisition in light of "recent developments," including the possibility of new U.S. tariffs on French goods and Tiffany & Co.'s request to push back the deal's deadline from Nov. 24 to Dec. 31.

"As a results of these elements, and knowledge of the first legal analysis led by the advisors and the LVMH teams, the Board decided to comply with the Merger Agreement signed in November 2019 which provides, in any event for a closing deadline no later than November 24th, 2020 and officially records that, as it stands, the Group LVMH will therefore not be able to complete the acquisition of Tiffany & Co.," LVMH said in a statement.

Meanwhile, Tiffany & Co. says it will take legal action to ensure the deal goes through and has filed suit in Delaware. 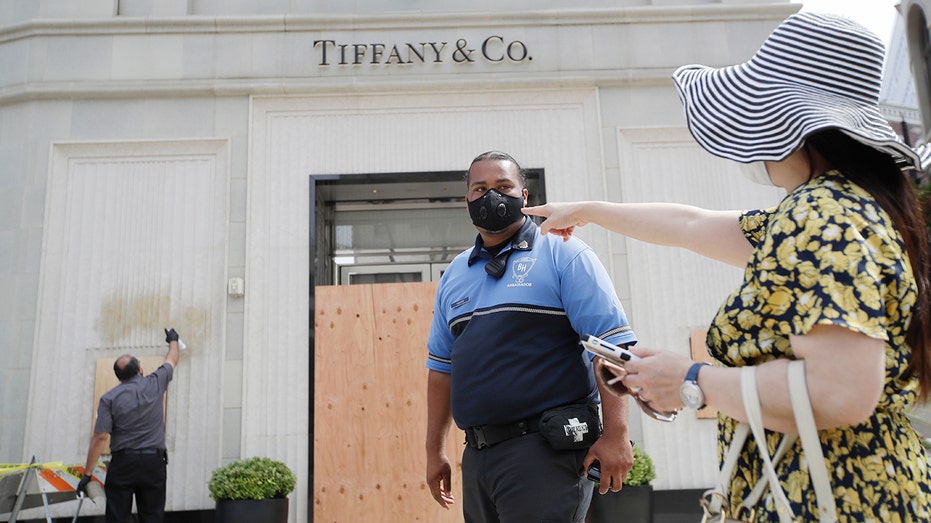 A security guard stands in front of Tiffany & Co. as graffiti is removed, Sunday, May 31, 2020, on Rodeo Drive in Beverly Hills, Calif., following a night of unrest and protests over the death of George Floyd. (AP Photo/Marcio Jose Sanchez)

"The lawsuit not only makes clear that LVMH is in breach of its obligations relating to obtaining antitrust clearance, but also refutes LVMH's suggestions that it can avoid completing the acquisition by claiming Tiffany has undergone a Material Adverse Effect ('MAE') or breached its obligations under the Merger Agreement, or that the transaction is in some way inconsistent with its patriotic duties as a French corporation," Tiffany & Co. said in a statement.

“The fundamental strength of Tiffany’s business is clear," Tiffany and Co. CEO Alessandro Bogliolo said in a statement. "The company has already returned to profitability after just one quarter of losses, and we expect our earnings in the fourth quarter of 2020 will actually exceed the same period in 2019.”

The news comes after a tough year for Tiffany & Co. The jewelry company swung to a first-quarter loss as temporary store closings due to the COVID-19 pandemic caused a “significant” sales drop.

FOX Business' inquiry to Tiffany was not immediately returned.