Back under local ownership, beloved Australian spread Vegemite is flexing its muscles with brand extensions and squeezing out smaller competitors.

"It's heart-wrenching, and it's devastating, it's personal," Ms Ramsey said. 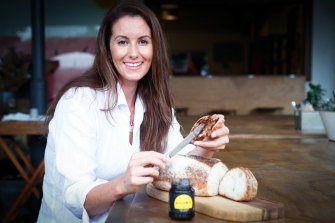 Ms Ramsey believes Vegemite's decision to launch a 40 per cent reduced-salt product is to blame for pushing her off the shelves.

"It's been really hard as a small business competing against such a Goliath," she said. "We really feel that they keep launching the product extensions to effectively take up more shelf space and they can use the power of their brand to do that."

AussieMite became gluten-free a decade ago and worked with the coeliac community for years to build a following, as well as working with a nutritionist to add more vitamins and minerals. Ms Ramsey said Vegemite had copied these innovations.

As well as the original spread, Vegemite now has Cheesymite, a gluten-free version, a product with 25 per cent reduced salt and in the past few weeks it launched a spread with 40 per cent less salt than the original. Vegemite senior marketing manager Matt Gray said the 25 per cent reduced-salt version would be phased out over the next few months.

Bega Cheese bought Vegemite and other brands from Kraft for $460 million in 2017 and the recent financial results show Vegemite sales are growing.

"It’s important that we listen to our customers and their dietary requirements," Mr Gray said. "No matter if you’re coeliac, low FODMAP, vegetarian, vegan or looking to reduce salt from your diet, there’s a Vegemite product for you."

Ms Ramsey said Bega's tactics were "corporate greed personified" and it was not sustainable for the Australian economy if small companies were forced out of business. She would try to save her business by focusing on export.

An Australian Competition and Consumer Commission spokesperson said under the Food and Grocery Code, retailers could only delist a supplier’s product for genuine commercial reasons, such as failure to meet sales or profitability targets.

A Woolworths spokesperson said delisting AussieMite was a "difficult decision" made "after a sustained period of underperforming sales".

"While we've continued to support the product on our shelves despite this lower turnover for a number of years, it’s unfortunately not resonating with enough customers to continue stocking it," the spokesperson said.

Coles confirmed it had dropped AussieMite in 2017, except for 180 stores in the product's home market of NSW (Ms Ramsey is based in Byron Bay).

When AussieMite first launched in 2001, it was taken to court by Vegemite for imitating the brand, but it won the right to stay in business.

Later it fought but ultimately lost a long court case against Dick Smith Foods over the name OzEmite, which is pronounced the same as AussieMite.

Entrepreneur Dick Smith said he no longer owned, or received any payments from OzEmite, and had handed that over to the manufacturer, South Australia-based Spring Gully.

Mr Smith said he wished Spring Gully well with OzEmite but was delighted to see Vegemite back in Australian hands.

He said it would be very tough for any challenger brands to compete against Vegemite.

"It's all about big business, it's all about greed, and Coles and Woolies have to have never-ending profit increases otherwise the board will be sacked, so they have to be completely ruthless," Mr Smith said.