New York (CNN Business)HBO Max subscribers had the option to stream “Godzilla vs. Kong” in the comfort of their homes during Easter and Passover weekend, but plenty of moviegoers opted to see it in theaters. That’s great news for the publicly traded owners of big multiplexes.

Warner Bros., the studio that released the film, said Sunday that “Godzilla vs. Kong” has raked in nearly $50 million at the US box office since its release last Wednesday, sending shares of AMC (AMC) — a stock that’s incredibly popular with traders on Reddit — soaring more than 15%.
Those box office numbers make the epic monster mash film the biggest Hollywood hit, by far, since the pandemic forced many theaters to shut down for a big stretch last year. Some cities are now letting theaters reopen, but at a limited capacity to start.

Some moviegoers are clearly craving the big-screen experience, and that will be a boost for the likes of AMC. The company which also benefited from an analyst upgrade Monday. Eric Wold of B. Riley Securities raised his rating to a “buy” and hiked his price target from $7 a share to $13 — about 20% above where the stock is now trading.

AMC’s monster move was echoed on a smaller scale by other related stocks: Cinemark (CNK), Marcus (MCS) and giant screen exhibitor IMAX (IMAX) also each rose between 3% and 6% while the UK-listed shares of Cineworld, the London-based owner of Regal Cinemas, were up 4%. 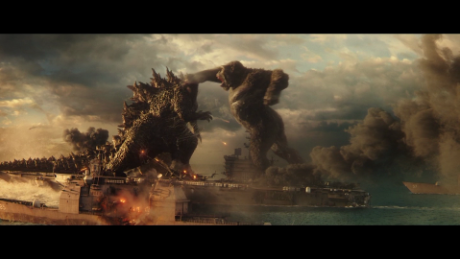 The strong debut for “Godzilla vs. Kong” is particularly notable that given that HBO Max customers could watch the movie for free as part of their monthly subscription.
Clearly, many people were willing to venture out to see the larger-than-life creatures on a big screen in surround sound. Not everyone wants to stay home and watch movies on Netflix (NFLX), Amazon (AMZN) and the countless other streaming services.
“Godzilla vs. Kong” studio Warner. Bros, like HBO Max, is a part of CNN parent company WarnerMedia. Shares of WarnerMedia owner AT&T (T) were up about 1% as well Monday, along with the broader market.

The success of “Godzilla vs. Kong” could be a good sign for other big movie studios, such as Disney (DIS), Comcast (CMCSA) and ViacomCBS (VIAC), though all three of them also have their own streaming services.
So far, only WarnerMedia has decided to make all of its new releases available for streaming at no extra charge to subscribers. It’s not yet clear if the studio will stick with its lone wolf strategy in 2022 now that theaters are reopening and more Americans are getting vaccinated.
Source: Read Full Article