Mr Atkin led industry superannuation fund for construction workers Cbus for 12 years and has publicly criticised AMP over its cultural problems in the past. 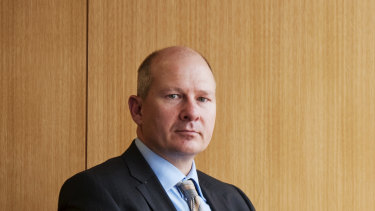 Mr Atkin will assume "operational leadership" of AMP Capital until June next year until a permanent candidate is found, according to a company announcement filed with the ASX on Wednesday.

Allan Gray managing director Simon Mawhinney, who is a major shareholder of AMP, said he had not been consulted on the appointment and has limited information about Mr Atkin's role but that he was "reasonably accomplished" and could draw on his experience at Cbus.

Mr Mawhinney said there was a "reasonably finite end date" to the role, but he would not draw any conclusions from what this could mean for the future of the company.

"This is an example of where investors can end up jumping at shadows or ignore it," he said. "I'm choosing to ignore it."

AMP appointed a team of consultants and lawyers in September to examine offers to splinter the group and sell off parts of the company. The following month American firm Ares offered to buy out 100 per cent of AMP’s shares which sent the stock soaring by 20 per cent.

AMP Capital is the most lucrative part of the business but has been plagued by cultural issues after Mr Pahari was appointed as chief executive after being fined $500,000 for sexually harassing a former female subordinate.

Mounting investor pressure over the issue toppled AMP’s board, causing chair David Murray and John Fraser to resign and Mr Pahari to be demoted. Mr Pahari remains at AMP Capital in his previous role, overseeing the company's push into infrastructure and property investing.