The chief executive of transport union-affiliated industry superannuation fund TWU Super has strongly opposed government legislation that would make it easier for workers to switch funds, a position that has been criticised as anti-competitive and self-interested.

Some unions create enterprise bargaining agreements that bind a superannuation fund to a company and prevent workers from being able to remove themselves from that option. Advocates say workers are actively involved in the enterprise bargaining process and unions can push for better working conditions and higher superannuation contributions through this process. But critics say a lack of choice stifles competition and weakens the rights of individuals to chose a fund. 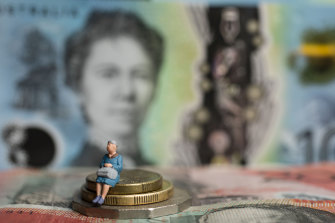 TWU Super was negotiated as the choice of fund for six major transport companies representing thousands of workers, including Linfox, Toll and TNT, through enterprise bargaining agreements led by the Transport Workers Union, a union that receives large financial contributions from TWU Super.

Speaking at the Senate economics committee in Sydney on Monday, TWU Super chief executive Frank Sandy defended the arrangement by claiming collective bargaining had provided workers with super contributions higher than the compulsory level, citing the example of Toll workers, who receive payments equivalent to 14.57 per cent of their wage in superannuation contributions. The government mandated contribution is currently 9.5 per cent.

"That is the type of enhancement that is quantifiable which means workers are going to be demonstrably better off in their retirement," Mr Sandy said.

But Senator Andrew Bragg, a member of the Senate Economics Committee which is pushing a bill that would prevent lock-in contracts between super funds and companies, argues greater choice will help workers get a "better deal for their super".

"It’s about performance. If I’m a young truck driver why should I be banned from going to Cbus or a fund that performs better? Let the people choose," Senator Bragg said. 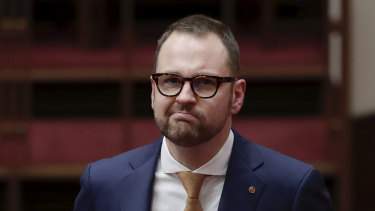 Senator Bragg has criticised TWU Super’s opposition to the Your Super Your Choice bill. Credit:Alex Ellinghausen

The $5.6 billion TWU Super was one of the many funds singled out in the prudential regulator’s heatmaps, designed to compare MySuper products, for having below average returns and low fee transparency. While superannuation ratings agency Canstar gives the fund a four-star rating, other online rating services claim it has excessive fees and unsatisfactory returns.

Mr Sandy said many of its members, largely working in trucking, aviation and other transport industries, did not have time to examine the fine print of the superannuation fund products and unions were best placed to negotiate employment terms and conditions.

"If you are a transport worker, truck driver, in the truck for up to 17 hours per day, there is very little time to turn your mind to the 4000 investment options available to you," Mr Sandy said. "You put your trust in the hands of the institution that works under your rules, in your neck of the woods and is the one you believe will do the job for you."

Mr Sandy said TWU Super was tailored to workers in the transport sector, including low-risk profiles for the older demographics of the industry and including insurance cover that extends to certain dangerous professions other insurers locked out. The fund's insurance cover also extends to death by suicide, which is over-represented in the transport industry, according to Mr Sandy.

Mr Bragg said TWU Super's opposition to the bill was unfair. “TWU Super seems scared of competition,” Senator Bragg said. “This is about people being bound to be in a fund they don’t want to be in."

But Mr Sandy said the new bill may lead to the banks engaging in predatory behaviour by offering employers financial incentives to switch their workers to the "deficient" retail sector.

"These workers would find themselves in retail funds, which have been exposed as corrupt, underperforming and hopelessly and irrevocably conflicted," he said.

Consumer advocate body Super Consumers Australia supports the bill and director Xavier O'Halloran said greater choice would create competition in the industry, which would ultimately drive up performance. But he added members should have better tools to compare options. "Denying choice for those for whom the default is not appropriate and is not the ideal way to go about solving this problem," Mr O'Hallaran said.