Two of the nation's biggest super funds have slashed the valuations of unlisted assets in property and infrastructure om their books as the economic impact of the coronavirus pandemic continues to hit investments.

The Age and The Sydney Morning Herald can confirm Unisuper, the $85 billion fund for university workers, has cut the value of its holdings in unlisted infrastructure by 6 per cent, and its unlisted property holdings by 10 per cent. 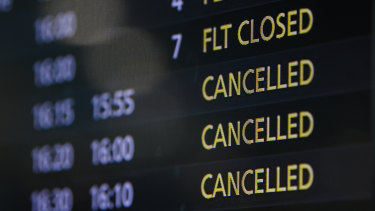 Super funds are major funders of unlisted airports and shopping malls, two of the hardest hit industries in the coronavirus pandemic. Credit:AAP

It comes after AustralianSuper, the nation's biggest super fund, told members it had cut the value of the unlisted assets on its books by 7.5 per cent.

Unlisted assets are not priced daily by the public markets and require regular independent reviews. AustralianSuper brought this quarterly analysis forward, resulting in the valuation cut. It had a flow on effect of reducing the total value of AustralianSuper's balanced fund option by 2.2 per cent."The values of all investment portfolios have been adjusted to reflect the economic and financial market impacts of Covid-19," AustralianSuper chief executive Ian Silk said.

AustralianSuper has more than $30 billion deployed into unlisted assets. Its investments include electricity distributor Ausgrid, ports in Sydney and Brisbane, and the Brisbane Airport.

The aviation industry has been brought to a standstill by travel bans designed to limit the spread of the deadly virus. Shares in the ASX-listed Sydney Airport are down 43 per cent since February 17.

Super funds have poured money into unlisted assets to diversify their risk and reduce volatility.

AustralianSuper's revised valuation was passed onto members on Monday and announed Tuesday. "Members do not need to take any action," Mr Silk said. "The fund will continue to constantly monitor the outlook and ensure valuations remain fair."

Reports from December 2019 show AustraliaSuper's balanced fund option has 11.3 per cent invested in infrastructure, 6.7 per cent in direct property and 3.8 per cent in private equity. AustralianSuper's property portfolio includes large shopping centres and office buildings in the UK, US and Australia. The retail industry has been one of the hardest hit in the crisis as cities go into lockdown forcing footfall at malls to dry up.

The superannnuation industry has gone to significant lengths to remind account holders that super is a long-term investment and that switching investment options now to more defensive assets, like cash, will only serve to lock-in losses.

Unisuper did not inform members of the drop in value of its unlisted assets. It was contacted for comment.