A potential resurgence in US COVID-19 infections led by the Delta variant will barely dent consumer spending thanks to widespread vaccinations, according to Goldman Sachs economists.

There is little sign that restaurant bookings and consumer spending more broadly are slowing in parts of the country where coronavirus cases have increased in recent weeks, Goldman Sachs analyst Laura Nicolae wrote in a note to clients. Across the Atlantic, British data indicate that country’s recent spike in cases had little impact on economic activity there, she said. 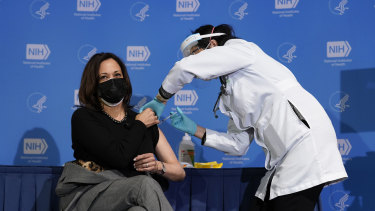 US Vice-President Kamala Harris as she received her second COVID jab early this year. The higher rate of vaccinations will protect America from large-scale economic damage in a Delta variant surge, Goldman Sachs says.Credit:AP

“Economic activity might decrease more sharply if new virus cases and deaths reach higher levels,” Nicolae wrote. “But the combination of the low sensitivity of consumer activity in the US and UK so far suggest that the economic effects of a Delta outbreak in the US would be modest.”

COVIID-19 cases are increasing in many parts of the US, led by the more contagious Delta variant. The regions experiencing some of the highest increases are also areas with among the lowest vaccination rates.

Goldman Sachs sees a low risk of economic shutdowns and renewed business restrictions because of the high rate of vaccinations, particularly among the more-vulnerable elderly population.

Despite an uptick in cases, high-frequency data at the county and city level such as restaurant bookings suggest Americans aren’t overly concerned about the increase in infections.

Such a modest impact on the economy would mark a contrast with the northern hemisphere winter, when a surge in infections coupled with a lack of vaccinations — which were just getting started — stalled consumer spending and hiring.

Any potential economic damage from a spike in infections this time is more likely to come from voluntary social distancing or people staying away from work due to health fears, Nicolae said.

The Market Recap newsletter is a wrap of the day’s trading. Get it each weekday afternoon