A sliding Australian dollar will mean clothes and electronics are likely to become more expensive, but economists say industries that would ordinarily benefit from a depreciating currency are losing out in the unique, coronavirus world.

With the Australian dollar plunging to US55¢, its lowest level since 2003, consumers are bracing for a price hike in commodities that are imported, from smartphones and TV sets to fashion items, footwear and accessories. 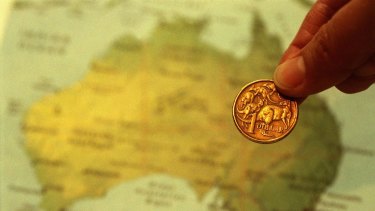 The Australian dollar plunged to its lowest level since 2002 on Thursday.Credit:AFR

"Thirty to 40 per cent of global supply chains in the textile sector originates from China or from India," National Australia Bank’s head of foreign exchange research Ray Attrill said.

But Mr Attrill said these price rises might not be seen immediately as retailers will try to absorb the price in an effort to avoid deterring more shoppers, with the sector already struggling with dwindling foot traffic.

“That’s the problem for retailers. As the dollar falls, their cost base is going up and with consumer sentiment as weak as it has been, it’s going to be difficult to pass that on,” he said.

Ordinarily, a depreciating currency is good news for the Australian economy. AMP’s senior economist Diana Mousina said a 5 per cent drop in the dollar could spike GDP by around 0.5 per cent, however, the rapid speed of the falling dollar value meant that growth was unlikely.

"It’s moving closer and closer to its record low around 47 cents. I don't think it will have the same impact on growth this time round," she said.

Depreciation would also usually benefit industries like tourism and education, Mr Attrill said, as foreigners try to take advantage of cheaper prices. But with restrictions on global travel and countries facing lockdown, these sectors were seeing the opposite effect.

“The weakening Australian dollar makes the cost of university education a lot cheaper and a holiday a lot cheaper," Mr Attrill said. “In a different world that we’re unfortunately not living in, it [depreciation] would be very good for those sectors. But Chinese students can’t enter the country at the moment. Italians can’t get here for a holiday. This is not a normal world.”

In some positive news for consumers, the price of fresh food grown locally will not be impacted, Mr Attril said, and petrol was already starting to show signs of being cheaper as crashes in oil prices have been compounded by the sliding dollar.

Ms Mousina said it was difficult to tell which supermarket products would be most affected, but there would likely be a rise in prices for essential household items.

"You might have one part made in one country and another part made in another country. So overall the constraints on supply will generally push prices up for household goods," she said.

It is important to note the Australian dollar is falling hard against the American dollar, but when compared to the Euro, the decline has not been as sharp. So commodities imported from these countries, "you're bathroom fittings from Italy, for example" would likely be not see prices inflate to the same level, Mr Attrill said.

KPMG's chief economist Dr Brendan Rynne encouraged shoppers to seek out local produce, that will not only be cheaper in the current market but plentiful in supply. "The key message is don't hoard and don't panic buy. You don't need to."