Davos Man may have just missed the opportunity to retire gracefully.

The globetrotting executive's favourite Alpine talking shop has been postponed until mid 2021, with organisers settling for a smaller-scale digital alternative in the usual January slot.

They are right to say there is an urgent need for the world to reset after the social and economic ravages of a pandemic. Whether the World Economic Forum is the right venue to draw that path to recovery is more questionable. 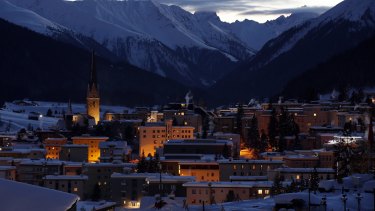 Dusk falls in Davos: The annual gathering of the world’s rich and powerful in the Swiss ski resort hasn’t changed the world, despite its lofty mission statement.Credit:Bloomberg

If nothing else, 2020 has shown just how much society needs to listen to new voices. It's also the Davos crowd's consistent ability to be overtaken on the main issues of the day that suggests the need for a different kind of assembly.

The 50-year-old event hasn't changed the world, despite its lofty mission statement, but it certainly represents an impressive feat. Founder Klaus Schwab turned a gathering at an unremarkable Swiss ski resort into a 3000-strong shindig that has become shorthand for the global elite, building a not-for-profit thought leadership empire with annual revenue of roughly $US380 million ($524 million) along the way. Even he has found it difficult to repeat the miracle with mini versions elsewhere.

For all the jokes about out-of-touch billionaires on mountaintops, Davos serves a purpose by bringing together executives, policy makers and campaigners who are rarely in the same place at the same time.

It even has some democratic aspects: Decent lodgings close to the congress centre are hard for everyone to track down. Even rainmakers, chief executives and Bono have to contend with queues for the coat check and at security. Most delegates get around the town's icy sidewalks on foot.

For all the refugee simulations and women's breakfasts, Davos is out of sync. It's too easy to caricature executives who fly in on private jets to listen to speeches on climate change, or who discuss inequality but not executive pay.

None of that, though, makes Davos the right place to design a new economic and social order, or to fix the deep rifts laid bare by the pandemic.

Indeed, almost everything else about the event, from its inaccessible location to the WEF's membership fees, is as far as it is possible to be from the requirements for an inclusive post-COVID world. That would require a place that is willing to silence the thought leadership long enough for quieter views to be heard.

Davos has come a long way from the way it was when I first visited in the mid-2000s. Then, I found few women who weren't the fur-clad wives of delegates. My compatriots were almost all serving the coffee. Organisers now press companies to mix up their teams. Still, though, females make up less than one in four attendees, while Asians, Africans and Latin Americans could be far more present. 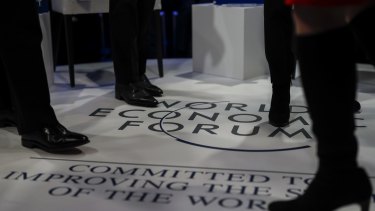 Lack in diversity: Females make up less than one in four attendees, while Asians, Africans and Latin Americans could be far more present.Credit:Jason Alden

In the end, this is a place that fosters an elite within the elite, where participants get lost in the inflexible hierarchy of colour badges and concentric rings of power. Only at Milanese fashion shows have I seen a similar knack for dividing audiences into castes.

For all the refugee simulations and women's breakfasts, Davos is out of sync. It's too easy to caricature executives who fly in on private jets to listen to speeches on climate change, or who discuss inequality but not executive pay.

Dutch historian Rutger Bregman caused a sensation in 2019 by suggesting there should be less talk of philanthropy and more on tax avoidance. It was a firefighters' conference, he joked, where no one was talking about water. He wasn't invited back.

It's harder than ever in 2020 for politicians and even executives to justify the trip, especially with other elite gatherings simply opening up by going online, as the US Federal Reserve's annual retreat at Jackson Hole, Wyoming, is doing. My colleague Mark Gilbert wrote in April about fund manager Standard Life Aberdeen, which took the nearly $US4 million it would have spent and donated to community projects. Others may choose to follow.

But there's a more important reason for finding an alternative forum to decide on what the world should look like after coronavirus. No, it's not just that we are turning away from the pan-national, pro-market views that have long kept Davos going.

It's quite simply that the Davos crowd is often wrong — even if it is rarely self-aware enough to be anything less than certain of its views.

It failed to foresee the global financial crisis, and in 2007 and 2008, mostly waved the threat away. It dismissed President Donald Trump and didn't expect Brexit, or indeed other populist surges. Saudi Crown Prince Mohammed bin Salman was a young reformer to be supported, months before the murder of journalist Jamal Khashoggi.

In January this year, few were concerned about the emerging novel coronavirus, though extreme weather and climate have finally made it to the top of the worry list.

That's partly the echo-chamber effect and human bias, but it's also the lack of diversity that makes it so hard to actually hear different thoughts. Those, unfortunately, may be precisely the ones we need.