It's not only factories that can't retool overnight to meet the COVID-19 pandemic. Our brains can't, either. The way we think and the things we think about follow patterns that are capable of evolution and change – just not that fast.

You can see this phenomenon all around you right now: whatever we cared about before, we're now using as our lens to think about the novel coronavirus. And subject matter experts, the people we need most in a crisis, are also the most likely to keep thinking as they have, because their thinking is so strongly shaped (or deformed) by professional training and strong collective values.

I could give you lots of examples. If you usually think about workplace diversity, now you're likely to be focused on the disparate impacts of the virus on workers based on sex, race and class. If you're focused on reforming incarceration, you're probably among those warning of the pandemic's impact on the prison population.

But perhaps the most important two examples of experts following their training and beliefs are the two disciplines whose knowledge is most central to the current crisis: epidemiologists and economists. 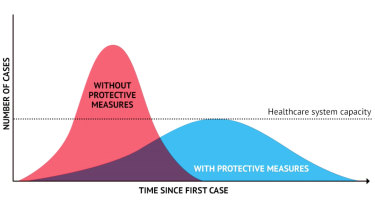 “Flatten the curve” is a perfect example of the epidemiological world view — slowing down the rate of new cases over time to avoid a sudden spike overwhelming hospitals and save lives.Credit:Matthew Absalom-Wong

Their intellectual approaches have a lot in common. Yet the difference between their approaches is already shaping government responses to the pandemic.

And what began as a difference of emphasis has the potential to become a chasm as the public health catastrophe continues and the ensuing economic crisis deepens.

To oversimplify, think of epidemiologists as experts who have spent their entire careers preparing to understand and suppress rapidly spreading disease. Their distinctive intellectual bent is to build models of transmission and then develop real-world interventions to change the expected outcome. Their core value is preserving public health.

Unlike epidemiologists, who identify a biological enemy and try to defeat it without thinking much about the costs, economists live on trade-offs.

"Flatten the curve" is a perfect example of the epidemiological world view. Early models of transmission showed a steep infection curve. Social distancing is an intervention aimed at elongating that curve so that hospitals aren't overwhelmed, and deaths are reduced.

Now think of economists, or to be more precise, macro-economists. They, too, have models – theirs are supposed to predict how the economy works. And they, too, are focused on interventions with the potential to improve outcomes.

But that's where the similarity ends. Unlike epidemiologists, who identify a biological enemy and try to defeat it without thinking much about the costs, economists live on trade-offs. It's an article of faith for economists that there is no such thing as an absolute value – not even the value of human life.

Instead, most economists embrace the hard-headed reality that helping one person often leaves another less well-off. When it comes to taking health-related policy measures, economists delight in pointing out that we are implicitly or explicitly putting a measurable economic value on human life. If we lowered the speed limit to 10 kilometres per hour, there would be almost no traffic deaths, they like to remind us. The 80 kilometres per hour speed limit puts a price on human life, whether we like it or not.

It's an article of faith for economists that there is no such thing as an absolute value – not even the value of human life.

What's more, macro-economists have typically spent their careers preparing to understand and respond to crises in the economy. They are acutely attuned to the grave dangers associated with an economy grinding to a halt. When they see governments taking measures that will have precisely that effect, they're preconditioned to respond with horror and to advise a different course of action.

The upshot of these different world views is that, on the whole, epidemiologists are insisting that we must take all necessary steps to control the spread of COVID-19. Meanwhile, many economists are saying that we must find a way to reopen the economy and that we must explicitly weigh the trade-off between virus-related health and broader human well-being that is in part a product of a functioning economy. (Of course, not all epidemiologists and economists fit neatly into these two boxes; I am offering a heuristic device to make sense of different approaches, not a sociological study.)

The gulf between the world views is big – and it's growing.

When epidemiologists say that there is no trade-off to be had between health and the economy, because if people keep getting sick and dying it will leave the economy worse off, lots of economists just shake their heads. "There is always a trade-off," you can hear them thinking. The consequences are measurable. People dying is unfortunate, but it's still a cost that can be compared to the costs of shutdown.

Meanwhile, when the economists talk the trade-off talk, lots of epidemiologists (and others) find it morally reprehensible when people are dying.

The conflict between these two approaches is going to come to a head if and when the rate of new infections and deaths starts to go down as a result of social isolation. That's when economists will say it's time to start getting people back to work. And it's when epidemiologists will say we are courting the disaster of a recurring outbreak.

In the meantime, the best we can do is be self-aware of our own intellectual tendencies.

Noah Feldman is a Bloomberg Opinion columnist and a professor of law at Harvard University.