The International Energy Agency has switched sides. It has carpet-bombed the fossil incumbency that it once defended so doggedly. The shibboleths of the last decade suddenly fall away. The economics of climate change turns upside down. The future headache becomes the risk of failed petro-states with collapsing revenue streams.

Slashing CO2 emissions and switching to renewable energy is not a “cost” or a constraint on rising affluence: it lifts global GDP growth by 0.4 per cent a year over the course of this decade. World output is 4 per cent bigger in real terms by 2030.

That is the verdict of the IEA (with the International Monetary Fund) in its roadmap on global energy on the way to a 1.5 degree world. Net Zero by 2050 is the closest thing we have to catechism. The report is the bell that tolls for the fossil age. Not even natural gas escapes the cull.

“We have never seen anything like this before in the history of the IEA. There’s been a universal thumbs up from the climate community,” said Dave Jones from the anti-coal group Ember. 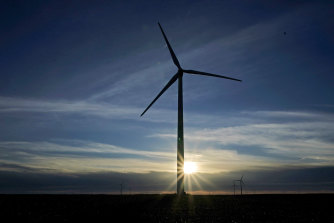 In 20 to 40 years from now, all our energy could come from wind, solar and hydro, experts say.Credit:AP

Net zero does not cost jobs: it replaces 5 million lost in oil, gas and coal with eight times as many jobs for engineers, electrical experts, offshore operators, solar technicians or lithium miners, whether directly or indirectly.

It does not raise energy costs: it cuts the average bill for households on heating, cooling, electricity, and car fuel from $US2800 ($3630) to $US2300 ($2980) a year by 2030 in advanced countries. The energy share of disposable income halves from 4 per cent to 2 per cent by mid-century. It is tantamount to free energy.

It enables hundreds of millions of people in mid-tier economies to join the middle class, to buy cars and share Western living standards at no net increase in the percentage of their take-home pay.

Renewables are not virtue-signalling by Davos Man, as the IEA’s director used to relish saying with a finger-wag every year at the Alpine Mecca of green pieties. Net zero does not leave the world’s poor behind: it saves them. It is the cheapest way to reach 800 million people with no electricity, and a further 2.6 billion people with no clean cooking option.

Rural Africa leapfrogs beyond the old model. It does not need coal plants with a centralised grid and miles of pylons, or diesel driven hours into the bush at ruinous cost. It goes straight to micro-grids based on solar power and batteries, getting cheaper by the day.

Net zero does not require technology yet to be invented, contrary to the claims of Bill Gates, who persists in stating two falsehoods: that “using today’s technology, it will be virtually impossible to meet our goals” and that “nearly all of today’s existing zero-carbon technologies are more expensive than their fossil-fuel counterparts”.

Nor does net zero mean the demise of oil and gas companies. They can ride the next boom because they command the engineering and project skills needed to produce green hydrogen and synthetic fuels – rather than talking about it – or to capture CO2 and turn it into a lucrative revenue stream.

The proviso is that they must reinvent themselves in time as Total, Equinor, Repsol, Shell and BP are already doing. A defiant ExxonMobil has less place in the IEA’s post-combustion world: the report calls for a halt to all new oil and gas projects as of this year, and forever.

Global oil demand falls from 100 million barrels a day before COVID to 24 million by 2050, mostly for plastics and holdouts such as aviation jet fuel (I dispute that. None will be needed for jets). The price slithers to $US35 in 2030, and $US25 in 2050. The $US100 plus levels of the glory years become a memory.

Reading the report, you could conclude if we did not have a climate crisis, we would need to invent one in order to make humanity richer, healthier, more self-sufficient and less vulnerable to geopolitics.

This scenario does not preclude a final triple-digit swansong for crude in the early 2020s as economic recovery collides with a seven-year drought in oil investment. The greener we go, the greater the immediate oil spike, since Big Money will not fund drilling when they know that the game is up.

A crude bull market over the next two years will raise the pump penalty on petrol, quicken the switch to electric vehicles, and therefore be the last hurrah. The IEA says EVs will make up 60 per cent of new car sales by 2030 under net zero.

You could say the IEA’s Damascene conversion was forced upon it. The agency is supposed to speak for the OECD bloc of rich democracies, and nearly all preach net zero. It would have been institutionally suicidal to resist the Green Deal politics of Joe Biden, Boris Johnson, and Ursula von der Leyen.

It is alleged that the first drafts were less evangelical, and less fatal for fossils. The final draft, post-Trump, is diplomatically aligned with the thinking of US climate envoy John Kerry, the big beast of net zero.

That said, the agency still fails to “get” renewable technology (or feigns not to). This has always been its blind spot, the source of so many forecast errors since the dawn of wind and solar. “They have been heroically bad,” said Kingsmill Bond from Carbon Tracker.

The IEA stated as recently as 2019 in its world outlook that the levelised cost of solar was $US95 MWh, to the consternation of those who install it. A year later it had to slash the figure to $US50 MWh, and that is already history. Desert solar in Abu Dhabi is being developed today at under $US14 MWh. Mr Bond says the IEA is repeating the mistake, this time by assuming that the annual fall in solar costs will abruptly slow from 18 per cent to 5 per cent in the 2020s and to 1 per cent 2 per cent thereafter. The compound effect of that tweak radically changes the projected energy landscape.

It slows electrification and creates more space for the survival of coal and gas, fitted with carbon capture and storage (CCS). “The IEA is manipulating the figures because if it put in realistic estimates, it would finish off fossils even sooner,” he said.

In my view, fossils may hang on in power plants but if so it will be because of a drastic reduction in the cost of CCS, perhaps using the British Allam cycle. The default setting, however, is that ever-cheaper solar will sweep the board unless something just as clean and cheap can match it.

Seifi Ghasemi, veteran head of the US industrial group Air Products, put the net zero case succinctly at this year’s CERAWeek, explaining why he was betting $US10 billion and the firm on “green” hydrogen made from renewables via electrolysis.

“The way we see the future, in 20 to 40 years from now, all the energy that mankind uses will come from wind, solar, and hydro. Forty per cent of this will be used directly to power EVs, heating, light, air conditioning and cooking. The rest will be used to break down water and produce hydrogen. That will be the source of energy to drive trucks, ships, trains and industries like steel,” he said.

That is becoming the market orthodoxy. Free enterprise is a step ahead of the IEA.

But at least the agency has done the world a service. It has yanked the rug from under the feet of those with vested interest who keep repeating that we cannot afford to stop global warming.

Reading the report, you could conclude if we did not have a climate crisis, we would need to invent one in order to make humanity richer, healthier, more self-sufficient and less vulnerable to geopolitics. And yes, we crack CO2 emissions too. Alleluia.