It surprises me that, though the nation’s been watching anxiously for more than a year as our politicians struggle with the repeated failures of hotel quarantine and the consequent lockdowns, big and small, and now the delay in rolling out the vaccine, so few of us have managed to join the dots. 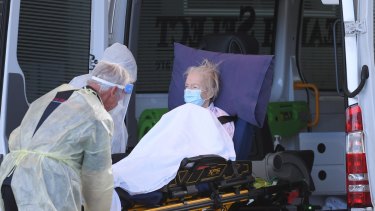 After the findings of the royal commission, it is no surprise there have been so many COVID-related deaths in aged care. Credit:Eddie Jim

The media love conflict, so we’ve been given an overdose of Labor versus Liberal and premiers versus Morrison & Co. But though we can use this to gratify our tribal allegiances, it doesn’t explain why both parties and both levels of government have had their failures.

No, to me what stands out as the underlying cause of our difficulties – apart from human fallibility – is the way both sides of politics at both levels of government have spent the past few decades following the fashion for Smaller Government.

Both sides of politics have been pursuing the quest for smaller government ever since we let Ronald Reagan convince us that “government is not the solution to our problems; government is the problem”.

The smaller government project has had much success. We’ve privatised almost every formerly federal and state government-owned business. We’ve also managed to “outsource” the delivery of many government services formerly performed by public sector workers.

But the smaller government project has been less successful in reducing government spending. The best the pollies have done is contain the growth in spending by unceasing behind-the-scenes penny-pinching.

And here’s the thing: pandemics and smaller government are a bad fit.

The urgent threat to life and limb presented by a pandemic isn’t something you can leave market forces to fix. The response must come from government, using all the powers we have conferred on it – to lead, spend vast sums and, if necessary, compel our co-operation.

In a pandemic, governments aren’t the problem, they’re the answer. Pretty much the only answer. Only governments can close borders, insist people go into quarantine, order businesses to close and specify the limited circumstances in which we may leave our homes.

Only governments can afford to mobilise the health system, massively assist businesses and workers to keep alive while the economy’s in lockdown, pay for mass testing and tracing, and flash so much money that the world’s drug companies do what seemed impossible and come up with several safe and effective vaccines in just months.

But when you examine the glitches – the repeated failures of hotel quarantine, the need for more lockdowns, the delay in stopping community spread, and now the slowness of the rollout of vaccines – what you see is governments, federal and state, with a now deeply entrenched culture of doing everything on the cheap, of sacrificing quality, not quite able to rise to the occasion.

The feds have lost what little capacity they ever had to deliver programs on the ground. They have primary responsibility for quarantine and vaccination, but must rely on the states for execution. Then, since both sides are obsessed by cost-cutting, they argue about who’ll pay – and end up not spending enough to do the job properly.

It took the feds far too long to realise that hotel quarantine was cheap but leaky. Every leak had the states closing borders against each other. The feds didn’t spend enough securing supplies of vaccines, then took too long to realise a rapid rollout wasn’t possible without help from the states.

Without thinking, Victoria initially staffed its hotel quarantine the usual way, with untrained, low-paid casual staff. It had run down its contact-tracing capacity and took too long to build it up – still without a decent QR code app. NSW let a host of infected people get off a cruise ship and spread the virus all over Australia.

The report of the royal commission laid much of blame for the aged care scandals on the feds’ efforts to limit their spending on aged care. They couldn’t demand providers meet decent standards because they weren’t paying enough to make decent standards possible.

One of the main ways providers make do is by employing too few, unskilled, casual, part-time staff, who often need to do shifts at multiple sites. Do you think this has no connection with the sad truth that the great majority of deaths during Victoria’s second lockdown occurred in aged care?

And now we discover the feds have failed to get the vaccine rollout well advanced even to aged care residents and staff.

Spend enough time denigrating and minimising government and you discover it isn’t working properly when you really need it.

Ross Gittins is the economics editor.

Get our Coronavirus Update newsletter

Stay across the news you need to know related to the pandemic. Get it every Monday.